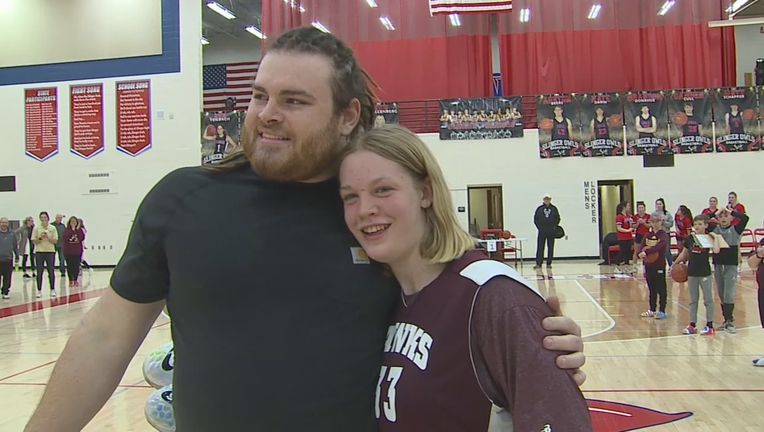 SLINGER, Wis. - Hartford native Quinn Meinerz has made it through his rookie season in the NFL.

There, the former UW-Whitewater standout learned all three interior offensive line positions for the Denver Broncos. He also started nine games and matured past his "Belly" moniker to earn his stripes.

Off the field is where he’s made his greatest impact.

"It's been a dream come true," said Quinn Meinerz, Broncos offensive lineman. "You know obviously there's always going to be ups and downs, and it's stressful and things like that, but at the end of the day, I'm playing football and there's no better job. Especially with how the NFL gives people a lot of platforms, I'm able to use it for a lot of things that I've always dreamt about doing."

One of those things is helping a close friend.

At Slinger High School over the weekend, Meinerz surprised Alaina Shelsta, who was playing in a basketball game.
The two will forever be linked.

Alaina has GLUT1, a rare blood sugar disorder, and Meinerz has been her advocate since the beginning.

Meinerz chose to represent "Hugs 4 Alaina and GLUT1 Deficiency Foundation" as part of the NFL’s "My Cause My Cleats" initiative this season.

Before Alaina’s game, he presented her with those special cleats.

"The fact that we can be an inspiration for each other, and we've grown this relationship is really special," said Meinerz. "I'm really looking forward to keep supporting her, and you know, just keep building on this relationship."

Meinerz is using his platform in the league for good, which will resonate well with his new head coach: former Packers offensive coordinator Nathaniel Hackett.

"I'm excited," said Meinerz. "Like everyone else, I saw the press conferences, and you can really feel that energy from him. I'm really excited to get to work with him and figure out you know who the other coaches are going to be."

It’s hard not for Meinerz to be excited. After all, he grew up watching the Green and Gold.

"Yeah, (Hackett has) got a great personality," said Meinerz. "I think that'll really show in the building every single day. He says he brings energy every single day, so I'm really excited for that style of coaching."

With all the speculation ramping up around Aaron Rodgers’ future in Green Bay and a potential trade to Denver due to his close relationship with Hackett, could Meinerz one day be blocking for a future Hall of Famer?

"It would be an honor to block for a quarterback of his status," said Meinerz. "I mean that's huge, and I think it would be really cool experience. You know obviously growing up in the state of Wisconsin and watching a lot of Packers games, it would be cool for him to come out to Denver. We'll have to see what happens. Obviously for the most part, I know what everyone else knows of what's happening, so we'll just have to wait and see."

Only time will tell, but this is for certain. Meinerz’s potential on the field and his ability to give back goes miles high.