MILWAUKEE -- Giannis Antetokounmpo had 30 points and 17 rebounds, Ersan Ilyasova came off the bench to add 17 points and the Milwaukee Bucks never trailed on the way to beating the Toronto Raptors 125-103 on Friday night and taking a 2-0 lead in the Eastern Conference finals.

Antetokounmpo scored 11 points in the fourth for the Bucks, who wound up with six players in double figures — three of them reserves. Nikola Mirotic scored 15, Malcolm Brogdon had 14, George Hill 13 and Khris Middleton 12. 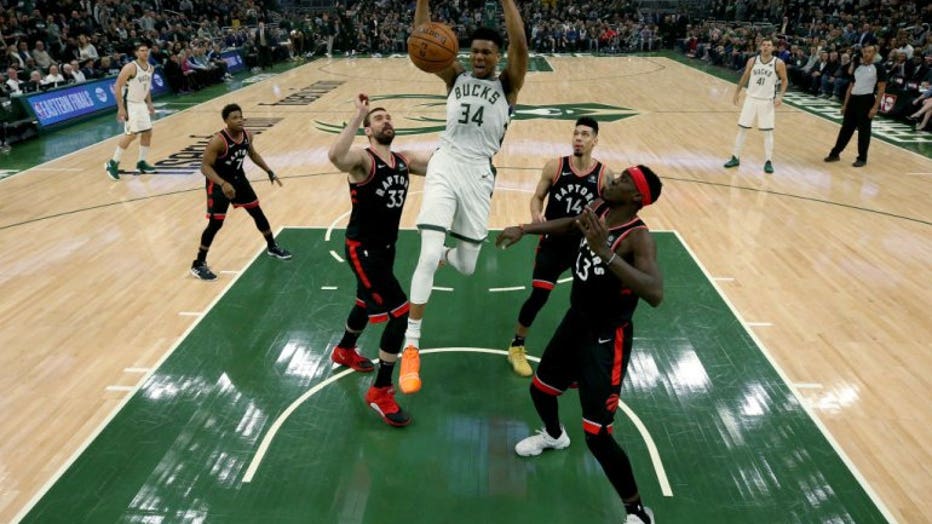 MILWAUKEE, WISCONSIN - MAY 17: Giannis Antetokounmpo #34 of the Milwaukee Bucks dunks the ball in the first quarter against the Toronto Raptors during Game Two of the Eastern Conference Finals of the 2019 NBA Playoffs at the Fiserv Forum on May 17, 2 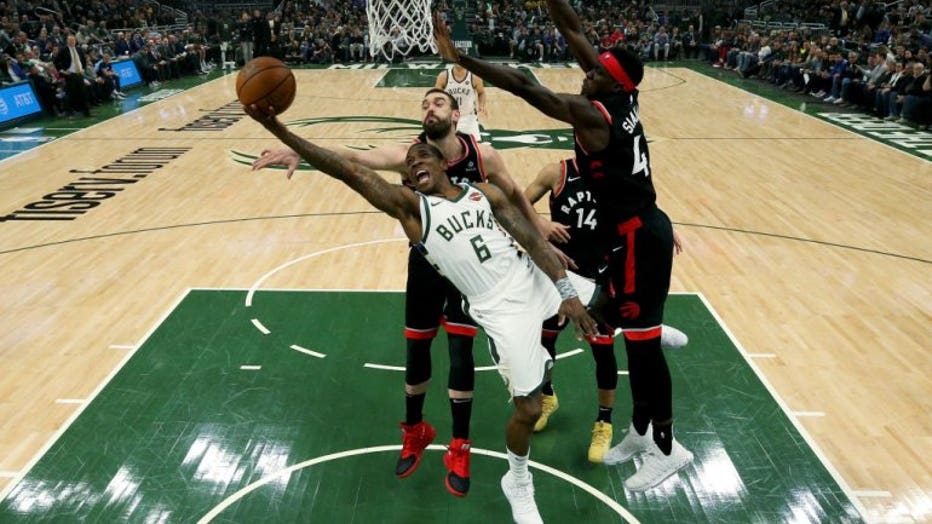 MILWAUKEE, WISCONSIN - MAY 17: Eric Bledsoe #6 of the Milwaukee Bucks attempts a shot while being guarded by Marc Gasol #33 and t34 in the first quarter during Game Two of the Eastern Conference Finals of the 2019 NBA Playoffs at the Fiserv Forum on

Kawhi Leonard scored 31 points for Toronto, which gave up the game's first nine points, never led and trailed by double digits for the final 39 minutes. Kyle Lowry scored 15 and Norman Powell had 14 for the Raptors.

Game 3 is Sunday in Toronto.

Milwaukee, which led the NBA with a 60-22 record during the regular season, became the 16th team to start a playoff run with at least 10 victories in its first 11 games. Only three teams — the 1989 Los Angeles Lakers, the 2001 Lakers and the 2017 Golden State Warriors — started a postseason 11-0.

The Bucks led by as many as 28, before Toronto did just enough chipping away to keep some semblance of hope.

With 5:51 left to play Antetokounmpo backed Leonard down on the block, spun back toward the center of the lane, scored while getting hit and starting a three-point play.

He yelled to the crowd and punched the air.

The knockout blow was landed, and soon, the Bucks moved two wins away from their first NBA Finals berth in 45 years.

Milwaukee had a big rebounding edge for the second straight game — 60-46 in Game 1, 53-40 in Game 2 — and finished with only seven turnovers.

"When the game started, we did a great job setting the tone," Antetokounmpo said.

The tone never changed, either.

Toronto was down 21 when Lowry got his third foul with 1:27 left until the break. The Raptors left Lowry in; he wound up getting his fourth foul while battling Mirotic for a rebound 24 seconds later and let the referees have an earful as he headed to the bench. Another roll of the dice didn't pay off, either: Raptors forward Pascal Siakam got his fourth shortly after halftime, then got his fifth with 9:26 left in the third.

They shouldn't have been, but this wasn't about calls.

It was just a rout.

Milwaukee's lead was 35-21 after the first, 64-39 at the half. It was the first time Toronto had been outscored by 10 or more points in each of a game's first two quarters since May 25, 2016, against Cleveland and the 25-point halftime hole was, by far, the Raptors' worst of the season. They trailed Houston 55-37 on March 5.

Antetokounmpo started the second half with a three-point play, pushing the lead to 28.

That's when Toronto found a bit of a groove.

The Raptors outscored Milwaukee 31-16 over the next nine minutes, getting within 83-70 on a 3-pointer by Fred VanVleet. But a quick flurry by the Bucks restored order — Brogdon rebounded his own miss and scored, then set up George Hill for a score in transition, and Hill scored again off a Raptors turnover a few seconds later.

Raptors: The 14-point deficit after one quarter was Toronto's second-largest of the season, with a 38-19 opening quarter at San Antonio —in Leonard's return there— on Jan. 3 the only one that saw them down more after 12 minutes. ... Lowry became the second player in these playoffs with four fouls by halftime. Detroit's Bruce Brown did it April 22, also against the Bucks. ... The Raptors are 0-63 all-time when trailing by 20 or more at the half.

Bucks: It was Milwaukee's 70th win of the season, tying the 1973-74 Bucks for the second-most in franchise history. The 1970-71 Bucks won 78. ... Robin Lopez, Brook's brother, was in the sellout crowd. ... Ilyasova's 15 first-half points matched a season high, and were part of a 31-11 bench scoring edge by the Bucks in the half. ... Milwaukee has won its last six playoff games, tying the franchise record for longest such streak. ... The Bucks are now 50-13 vs. the East this season.

The Bucks have never lost a series when leading 2-0; they've been in this spot 13 previous times. Toronto has never overcome a 2-0 series deficit in seven previous attempts.

This series has plenty of representation on the list of finalists for the NBA's top individual awards, revealed Friday. Antetokounmpo is a finalist for MVP and Defensive Player of the Year; the Bucks' Mike Budenholzer is a finalist for Coach of the Year and Siakam is a Most Improved Player finalist. Antetokounmpo is assured of being the Bucks' highest finisher in the MVP race since Kareem Abdul-Jabbar won the award in 1974.

Game 3 is Sunday in Toronto.