LOS ANGELES -- Greg Zuerlein hit a 34-yard field goal with 2:05 left and Ramik Wilson forced and recovered Ty Montgomery's fumble on the ensuing kickoff return, allowing the Los Angeles Rams to remain unbeaten without a late defensive stand in a 29-27 victory over the Green Bay Packers on Sunday.

Jared Goff passed for 295 yards and three touchdowns while the Rams (8-0) were sternly tested by the Packers (3-3-1) and Aaron Rodgers, who threw for 286 yards. 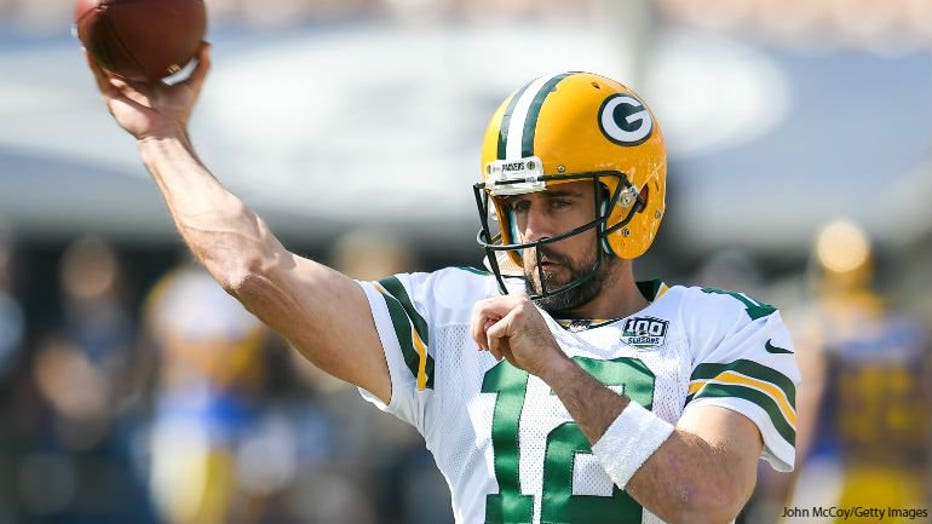 LOS ANGELES, CA - OCTOBER 28: Quarterback Aaron Rodgers #12 of the Green Bay Packers warms up ahead of the game against the Los Angeles Rams at Los Angeles Memorial Coliseum on October 28, 2018 in Los Angeles, California. (Photo by John McCoy/Getty I

Both teams rallied from 10-point deficits to take a lead in front of a bipartisan Coliseum crowd, but Rodgers never got the chance to mount one of his trademark game-winning drives.

Instead, the Rams extended their best start to a season since 1969 with another key play from LA's superlative special teams — and two crushing special-teams mistakes by Green Bay.

Marquez Valdes-Scantling caught a 40-yard touchdown pass from Rodgers with 8:50 left to put the Packers ahead 27-26, but Goff and Todd Gurley drove the Rams into range for Zuerlein's second field goal of the fourth quarter after a 25-yard punt by JK Scott.

Montgomery then coughed up his return, and Wilson pounced on the ball. Gurley ran 17 yards for a key first down and stopped before reaching the end zone in the final seconds — probably enraging his fantasy owners, but allowing the Rams to run out the clock.

Josh Reynolds caught two touchdown passes for Los Angeles, while Gurley rushed for 114 yards and scored a touchdown in his franchise record-tying 11th consecutive game on a 30-yard pass in the third quarter.

The Rams faced their largest deficit of the season when they trailed 10-0 early in the second quarter, but they calmly turned it into a 23-13 lead late in the third.

Rodgers answered with two touchdown drives to grab a one-point lead for Green Bay in the fourth quarter, but Goff answered his fellow Cal product and childhood hero after Aaron Donald sacked Rodgers on third down to stop the Packers' next drive.

Both teams had loud contingents of fans at the Coliseum, where Green Bay won the first Super Bowl in 1967. The Rams were back home for the first time in 31 days after three consecutive road victories got them off to their best start since 1985, while the Packers were greeted by a raucous bunch of California Cheeseheads in their first trip to Los Angeles since the NFL returned in 2016.

Green Bay came out strong on both sides of the ball after its bye week, and Jamaal Williams scored on a 1-yard TD plunge in the first quarter.

The Rams were not as sharp: They punted on their first three possessions for the first time in Sean McVay's head coaching career, and Green Bay sacked Goff three times early.

Los Angeles finally scored on a safety with 2:47 left in the first half when the defense blew up a run play from the Green Bay 1.

Goff then mounted a scoring drive ending in a 1-yard TD catch by Reynolds 21 seconds before halftime.

The Packers calmly responded with three big plays culminating in Jones' TD draw run up the middle with 13 seconds left in the third.

Sam Shields made several big plays for LA against his former team. The veteran defensive back caught a pass from Johnny Hekker on a fake punt, and he later downed a punt at the Green Bay 1 to set up the Rams' defense for its safety. Shields played seven seasons with the Packers before his fourth concussion in 2016 nearly ended his career, but he returned to the NFL with the Rams this season.

Packers: WR Randall Cobb had four catches for 40 yards in his return from a three-game absence with a hamstring injury.

Rams: WR Cooper Kupp missed his second straight game with a knee injury, opening the chance for Reynolds to shine.

Packers: At New England on Nov. 4.