BALTIMORE --  Lamar Jackson directed two scoring drives during a limited appearance, had an impressive touchdown run erased by a penalty and sparked the Baltimore Ravens to a 26-13 victory over the Green Bay Packers, who played Thursday night without quarterback Aaron Rodgers.

Rodgers developed back stiffness and was a late scratch , a move the team labeled as a "precaution." After being held out of Green Bay's first preseason game against Houston, the seven-time Pro Bowl star was slated to start for the first time under rookie head coach Matt LaFleur.

Instead, DeShone Kizer, Tim Boyle and Manny Wilkins struggled against a defense that last year was ranked No. 1 in the NFL. 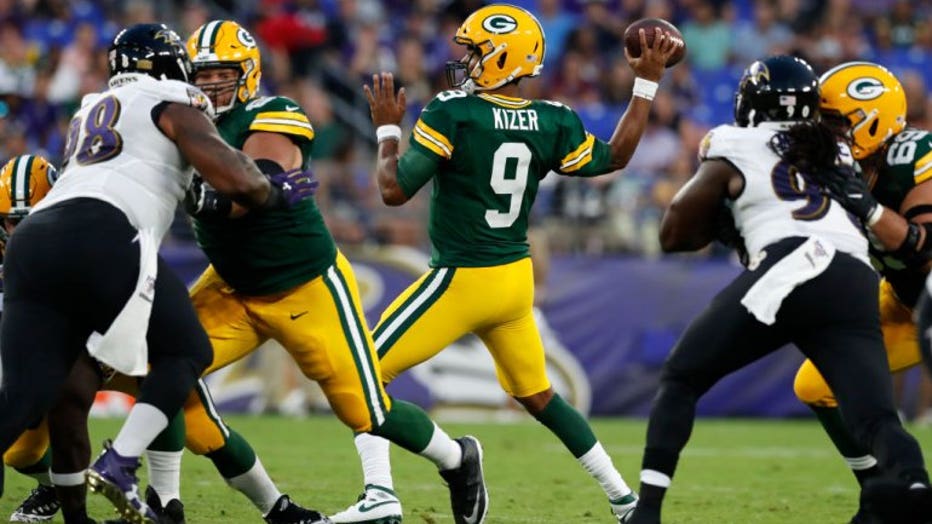 BALTIMORE, MARYLAND - AUGUST 15: DeShone Kizer #9 of the Green Bay Packers throws the ball in the first half of a preseason game against the Baltimore Ravens at M&T Bank Stadium on August 15, 2019 in Baltimore, Maryland.

Rodgers has played 165 regular-season games since breaking into the league in 2005, so there was really no pressing need to get him into a game three weeks before the Sept. 5 opener against Chicago.

Jackson, on the other hand, needed the work. Coming off a rookie season in which he didn't start until mid-November, Jackson is seeking to master a new playbook devised by first-year coordinator Greg Roman.

Jackson started and played three series last week in a 29-0 rout of Jacksonville. This time, the 2016 Heisman Trophy winner stuck around for two possessions, both of which ended with field goals. He completed 6 of 10 passes for 58 yards and ran twice for 14 yards. 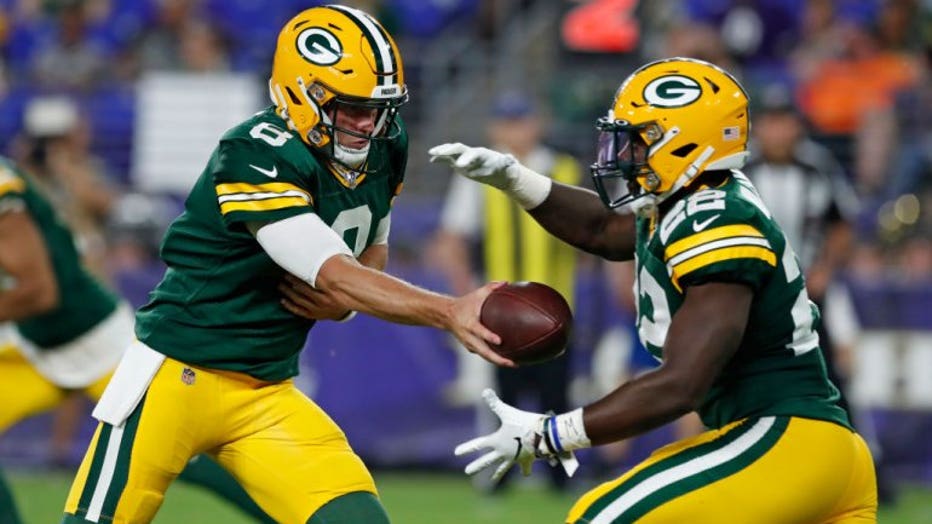 BALTIMORE, MARYLAND - AUGUST 15: Tim Boyle #8 of the Green Bay Packers hands of the ball to Dexter Williams #22 in the second half of a preseason game against the Baltimore Ravens at M&T Bank Stadium on August 15, 2019 in Baltimore, Maryland. (Ph

His best play displayed both his speed and elusiveness, but ultimately went for naught. On third-and-10 from the Green Bay 18, Jackson thrust forward from the pocket, sidestepped Tramon Williams and jumped over Jaire Alexander at the 5. He then high-stepped through the end zone before handing the ball to a fan.

"The four-man rush gave me a lane, our receivers were covered and I just did what I do best," Jackson said.

The play was called back because of an illegal block by Willie Snead, and Baltimore (2-0) settled for the second of Justin Tucker's four field goals. 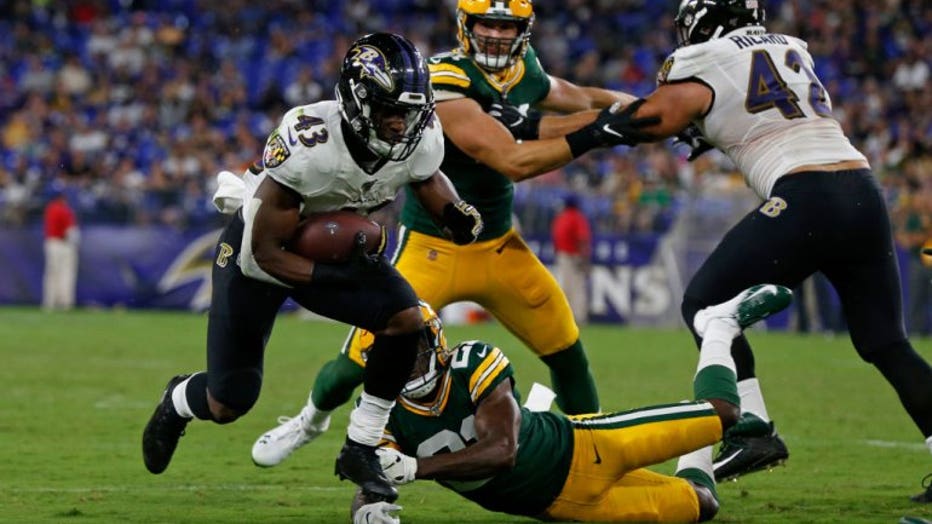 BALTIMORE, MARYLAND - AUGUST 15: Justice Hill #43 of the Baltimore Ravens runs with the ball in the second half of a preseason game against the Green Bay Packers at M&T Bank Stadium on August 15, 2019 in Baltimore, Maryland. (Photo by Todd Olszew 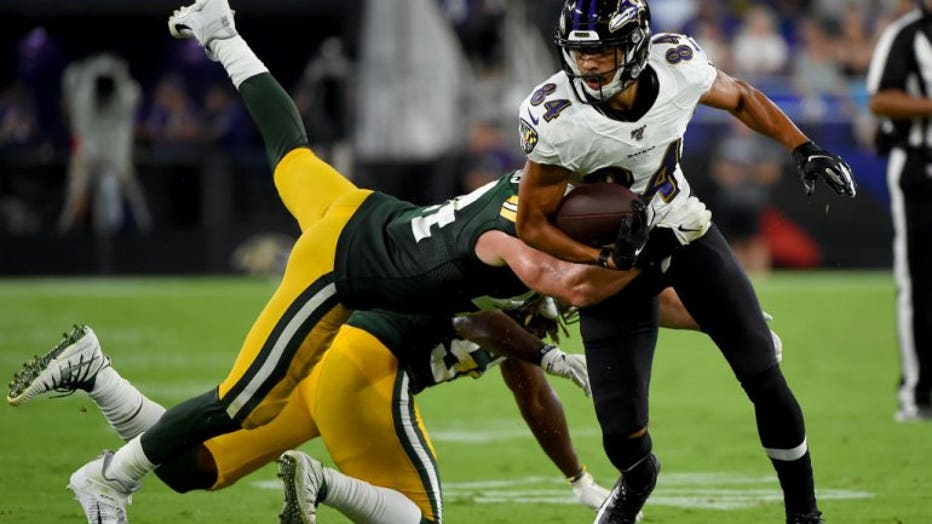 BALTIMORE, MD - AUGUST 15: Antoine Wesley #84 of the Baltimore Ravens runs in front of Ty Summers #44 and James Crawford #54 of the Green Bay Packers during the second half of a preseason game at M&T Bank Stadium on August 15, 2019 in Baltimore,

Rookie Trace McSorley threw a 23-yard touchdown pass to Chris Moore in the second quarter to make it 13-3.

Green Bay (1-1) got its lone touchdown in the third quarter on a 7-yard pass from Boyle to rookie Darrius Shepherd.

Ravens LF Chris Board sustained a concussion in the second quarter.

Ravens tight end Nick Boyle had every intention of leaping over Adrian Amos after catching a first-quarter pass. Problem is, Amos stayed upright. So Boyle ended up planting a foot in Amos' chest and was thrown backward.

Packers: A matchup against the Oakland Raiders next Thursday comes with a twist. The game will be held north of the border in Winnipeg.

Ravens: Following two days of joint practices with the Eagles next week, Baltimore plays on Thursday night in Philadelphia.