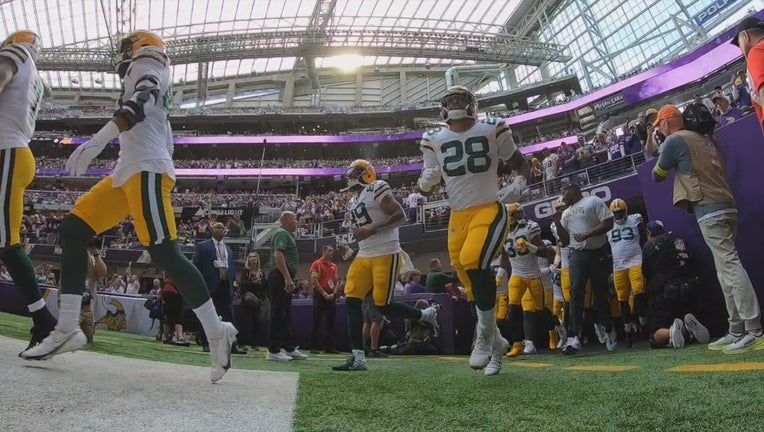 MINNEAPOLIS - He was the only player to find the endzone during the Packer's 23-7 loss to the Vikings on Sunday.

Tim Van Vooren goes Beyond the Game with AJ Dillon who is staying positive going into week two.

Tim Van Vooren: "We're going to be joined by AJ Dillon this season. So we're doing that right out of the box here in week one. And I have to say, first and foremost, we're looking forward to it. You are a lot of fun to work with the last couple of years. We get to work with you regularly this year, and you got a personality, A.J. So we're looking forward to that for sure. You were on this team last year. It looked like the sky was falling after week one, you become the top seed in the NFC. So you do have to keep this in perspective. Do you not good or bad?"

AJ Dillon: "Absolutely. I mean, same thing like when you're thinking about, you know, a game and, you know, a coach or whatever will say a lot of football left or a lot of, you know, basketball, if you're playing a basketball game. There's a lot of season left. We've got 16 more regular season games, and we're just getting started. We're just finding our identity. It's a new team. Every year is a new team. Now going into year three, I kind of really understand that statement. New guys, new faces, different places. And, you know, I think one thing we have is a lot of pride, like you said. And, you know, we really do, you know, care and love each other within the team. And so I feel like that'll carry us into next week. And instead of being, Oh, woe is me, it might be like, how can I help, you know, the team? Or what can I do to put myself in a better position to help the team?"

TVV: "Okay, so you guys walk out of here, what is the team vibe? You know, again, this is week one. By the same token, it is a loss. It's a divisional loss. What is it?"

Dillon: "Team vibe is, you know, they've got to see us again. You know, any time we're playing these divisional teams, you definitely want to bring home, but, you know, the good thing about it is we play them twice. So next time we'll be playing them, we know who they are. And, you know, I think we're learning who we are as a team and I think we're just going to build off that. I'd say the biggest takeaway is just, you know, kind of like what you're saying. You saw glimpses, especially in that second half. We came back, and we were moving the ball, we were scoring. So I think it's just put that all together and I think everybody kind of is laser-focused on that."

TVV: "What are you doing in a week of preparation? What's top of mind for you?"

Dillon: "First thing first is definitely, you know, just take care of the body. It's a long season so just go, you know, get the bumps and bruises taken care of and then, you know, go ahead, like I said, watch the film, see, look at myself and like, you know, where could I have gotten some extra yards, or where did I mess up a little bit, or how can I, you know, build off this for next week? Not negative. You can't change the past. You just got to move forward. And, you know, each game, each practice is a learning experience. So if I can go out there and make one less mistake or get two extra yards where I shouldn't have the following week, it'll be a good week for me, you know, it'll be a good building week and aimed in the right direction."