GREEN BAY -- The Green Bay Packers tried to get back to their winning ways on Sunday, November 6th -- facing the Indianapolis Colts at Lambeau Field.

The following players did not play in Sunday's game between the Packers and the Colts, according to Packers.com:

The Indianapolis Colts scored on the kickoff -- with Jordan Todman returning the kickoff for a touchdown.

The score was then Colts 7, Packers 0.

During the Packers' first possession, Ty Montgomery, who didn't play last week vs. the Atlanta Falcons, picked up 24 yards on his first carry.

Eventually, the Packers successfully completed a field goal to bring the score to 7-3.

The Packers scoring drive included nine plays for 53 yards in 4:01. The drive began at the Green Bay 31 yard line.

Mason Crosby's 48-yard field goal attempt was no good during the Packers' next possession -- and it was Colts' ball at their own 38 yard line.

The Colts were able to extend their lead to 14-3 with a seven-yard touchdown run by running back Frank Gore with 4:28 left in the first quarter.

The Packers were forced to punt, and after a 54-yard punt by Jake Schum, the Colts would take over at their own 13 yard line after an illegal block in the back penalty.

Soon came an INTERCEPTION by safety Ha Ha Clinton-Dix -- his second in three series, according to the Packers.

The Packers would take over at the Colts' 47 yard line.

The score was Colts 14, Packers 10 at the end of the first quarter.

As the second quarter got underway, the Colts increased their lead to 17-10 after a 28-yard field goal by Adam Vinatieri.

Jake Schum's 65-yard punt then pinned the Colts at their own 10 yard line with 11:36 left in the first half.

The Colts were forced to punt after Ha Ha Clinton-Dix and Nick Perry teamed up for a sack of Colts QB Andrew Luck.

Jake Schum pinned the Colts back again with the punt, and the Colts took over at their own four yard line with 5:44 left in the first half.

The Colts extended their lead to 24-10 with 11 seconds left in the first half after a seven-yard touchdown pass from Colts' QB Andrew Luck to Donte Moncrief.

As the second half got underway at Lambeau Field, Packers wide receiver Randall Cobb entered the game. He did not play vs. the Falcons with a hamstring injury.

Roughing the passer and holding penalties were off-set, and the Colts would soon take over at their own 21 yard line after an interception by Colts defensive back Darius Butler.

During their next possession, the Packers were within Colts' territory after a 13-yard gain by Ty Montgomery on the third-and-three pass out of the backfield. Then came a 25-yard completion to Jeff Janis.

Soon, Mason Crosby was able to successfully complete a 27-yard field goal to bring the score to Colts 24, Packers 13 with 1:46 in the third quarter.

There was a bit of a distraction for fans at Lambeau Field Sunday when a SQUIRREL ran onto the field! 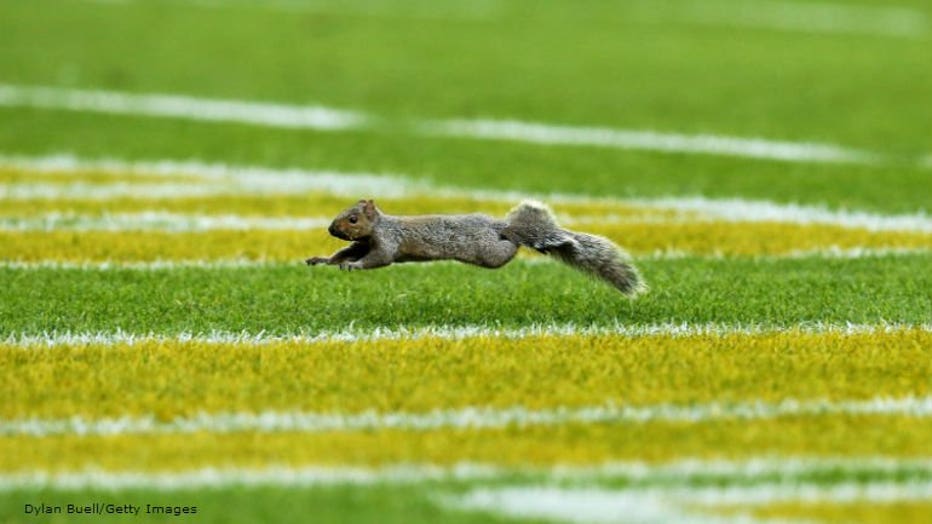 GREEN BAY, WI - NOVEMBER 06: A squirrel runs across the field during the game between the Green Bay Packers and the Indianapolis Colts at Lambeau Field on November 6, 2016 in Green Bay, Wisconsin. (Photo by Dylan Buell/Getty Images)

The squirrel first made its appearance in the first half, then returned late in the third quarter. With the Packers driving at about the Colts 12, the squirrel dashed along the goal line, forcing the officials to call timeout.

The squirrel finally went out of bounds, but not before causing a stir on social media with many fans joking the animal was seeing more of the end zone than the Packers.

The Packers settled for a 27-yard field goal after the timeout.

The Colts extended their lead to 31-13 after a four-yard touchdown run by Colts' running back Frank Gore late in the third.

In the fourth quarter, the Packers announced defensive back Micah Hyde was questionable to return with a shoulder injury.

Packers wide receiver Davante Adams caught a 40-yard pass from QB Aaron Rodgers -- and it was Packers first down at the Colts 13 yard line. And then came a Davante Adams TOUCHDOWN!

It was a two-yard touchdown catch with 7:40 remaining in the game.

With the extra point, that brought the score to Colts 31, Packers 19.

The Packers' scoring drive included six plays for 75 yards in 1:55. The drive began at the Colts' 25 yard line.

During the Colts' next possession, Packers inside linebacker Jake Ryan met Colts' running back Frank Gore in the backfield for a three-yard loss.

The Colts were forced to punt when outside linebacker Kyler Fackrell stopped tight end Jack Doyle short of a first down.

Packers' wide receiver Ty Montgomery was then able to gain 18 yards off a shovel pass from Aaron Rodgers.

Rodgers scrambled for 21 yards and hit Jordy Nelson for a 13-yard gain -- and it was first-and-goal at the Indianapolis three yard line.

Randall Cobb got open in the back of the end zone -- and Rodgers delivered for a three-yard touchdown!

With the extra point, the Colts then led the Packers 31-26.

The Packers' scoring drive included seven plays for 80 yards gained in 1:59. The drive began at the Colts' 20 yard line.

Ahead of the two-minute warning, Colts' QB Andrew Luck was able to complete a pass to T.Y. Hilton for a first down.