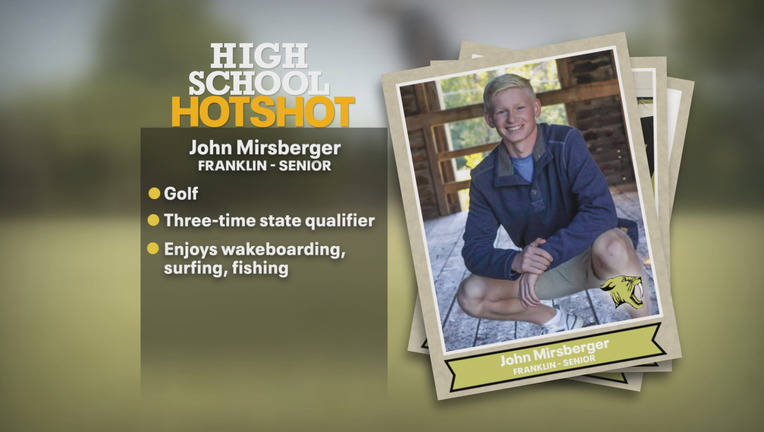 FRANKLIN, Wis. - Franklin High School's John Mirsberger is locked in when he's on the green, but when he's on the water, it's time to relax. The senior golfer is also a three-time state qualifier and that's why he's this week's FOX6 High School Hot Shot.

"It's been a weird year to start with all of these social distancing procedures, but to actually be able to get through it unlike last year," said Mirsberger. "It was a lot of fun and I'm glad we were able to get a season done."

Mirsberger finished eighth in his third and final trip to state. He said it's bittersweet especially after the journey he went through.

During the summer of 2019, Mirsberger tore his ACL after a pair of mishaps. He tried to do a trick over a friend while wakeboarding and then fell after an alley-oop in a basketball game with friends.

"The toughest moment for me was having to go to basketball practices and watch my teammates and not be able to help them," Mirsberger said. "Watch games and see starting lineups announced and national anthem and know that I'm not going to be a part of it. The recovery was almost more mental than physical."

But that injury is not going to stop Mirsberger from enjoying the lake life in the future because he still loves to wakeboard, surf and fish.

"I think it's just a break from the competitiveness," said Mirsberger. "Everything else I do, I want to win. Even if I'm with my friends and we're playing games, I want to go out there and win. I think when I'm out on the water, I don't have to worry about that. It's about relaxing and enjoying my time."

Next year, he is heading to UW-Madison where he will tryout for the club team.

"I don't want to go straight from competing all season to only playing rounds with friends and messing around," Mirsberger said. "I want to stay practicing and keep up the competitive side of my game. I want to be pretty good at golf for my whole life."