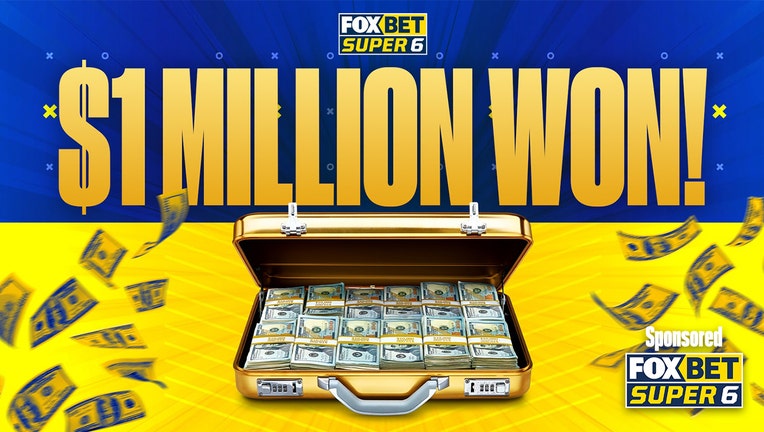 Three contestants won a piece of Terry Bradshaw's $1 million jackpot in the FOX Bet Super 6 NFL Sunday Challenge. Find out how they won!

Sunday was an especially memorable day for three lucky winners who will split $1 million after playing the FOX Bet Super 6 NFL Sunday Challenge.

Talk about a day when dreams came true!

Heading into the NFL Week 4 matchup between the Cardinals and the Panthers, five FOX Bet Super 6 contestants were just one game away from a chance at winning the million-dollar jackpot.

Terry Bradshaw was elated to announce the news on FOX!

So how did it all go down? With less than five minutes left in the fourth quarter, Carolina trailed Arizona 26-10.

And then it happened.

Panthers running back Christian McCaffrey caught a pass from quarterback Baker Mayfield and scored a 13-yard touchdown with 4:47 on the clock. After the score, the Panthers' two-point conversion attempt failed.

Legions of Panthers-faithful were clinging to hope that their team would get the second W of the season. However, the FOX Bet Super 6 players who were still in the running to win the million-dollar jackpot were keeping the faith that they could score a piece of the seven-figure pie.

The Cards kept the ball for the rest of the game. Arizona's James Conner had five carries and Kyler Murray kneeled down three times after the two-minute warning to run out the clock.

There were three contestants whose picks were perfect up until that point and who also had Arizona winning by at least 8 to 10 points! Now they will get to claim their share of the $1 million prize* (winners are pending verification of eligibility).

Two of the three winners were first-time Super 6 players! How amazing is that?

This gives a whole new meaning to Sunday Funday!

The FOX Bet Super 6 NFL Sunday challenge is a free-to-play contest where players can pick the winners and margins of victory of six marquee matchups. Get all six correct and cha-ching!

FOX Bet sweetened the pot during NFL Weeks 3 and 4 to a cool million dollars. No players got all six correct in Week 3, but Week 4 proved to be the charm.

In addition to NFL Sunday Challenge, fans can try their hands at other free-to-play contests in the FOX Bet Super 6 app like Big Noon Saturday and College Football Pick 6. Download the app, make your selections and submit your picks before the games for each contest kick off. It really is that easy.

Check back next week to learn more about the FOX Bet Super 6 players who are getting their piece of Terry's jackpot!

Download the FOX Super 6 app for your chance to win thousands of dollars on the biggest sporting events each and every week! Just make your picks and you could win the grand prize. Download and play today!

No purchase necessary. Open to legal residents of the US, excluding WA. 18 and older. See terms and conditions at foxsuper6.com. Sweepstakes and Prize Sponsored by TSG Interactive US Services Limited.