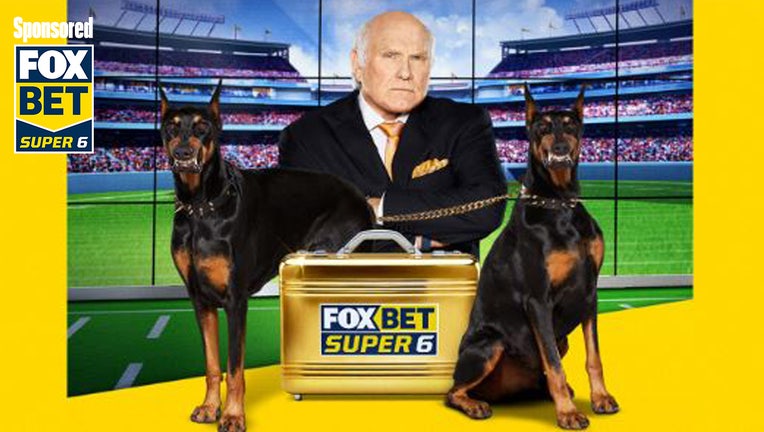 There's a song called "If I had a million dollars" by the band Barenaked Ladies. It's a 90s-era throwback, and in it, the group sings about all the things they'd buy if they had — well, $1,000,000. Some things on that list? A house, an exotic pet, a Picasso.

Thirty years later, it's your turn to sing along and fantasize.

FOX Bet Super 6 is a free-to-play contest where you pick the winners of six marquee matchups and the margins of victory. Get perfect picks for all six? Then you have a chance at a piece of the seven-figure jackpot.

Before you go to your FOX Bet app to make your picks, let's dive into our predictions for this week's Super 6 matchups.

Are you ready for an NFC North showdown?

The Vikings are coming off a 24-7 Monday Night Football road loss to the Eagles. It was a game where Kirk Cousins and his offense couldn't overcome Philly's defense. Cousins threw three interceptions in the primetime affair and finished 27-of-46 passing for just 221 yards.

On the other hand, the Lions got their first W of the year in a 36-27 victory over the Commanders in Week 2. And for the first time since 1952, the Lions scored 35 or more points in three-consecutive games.

But even though Detroit is coming off a kind of historic win, the Vikings have history on their side.

Since 2018, Minnesota is 14-10-1 when facing teams in the division. That's good for a 56% win rate. The Lions are 2-10 against NFC North rivals since 2018 when they're on the road. Not good for Detroit or the bettors who have backed them in those spots.

Something else to consider. The Vikings are 8-5 at home against NFC North opponents since 2018.

Cue Purple Rain because Minnesota is about to pour it on Detroit.

Prediction:
Vikings by 8 to 10 points

Will the Raiders have the luck of Las Vegas when they travel to Nashville to take on the Titans?

These two teams have only faced each other eight times since 2005 and split the series 4-4. So based on that, this game could go either way, right?

Dig a little deeper, and you'll find that Las Vegas has the edge.

Since 2015, the Raiders have dominated when they face teams from the AFC South. They've gone 8-5 in those games over the last seven years. And when Raiders quarterback Derek Carr is a road favorite as a starter, he has gone 9-7.

Having Davante Adams on the Raiders roster hasn't yet been the game-changer it was hyped up to be. In Week 2, Adams was limited to two receptions and 12 receiving yards. This was his lowest since Week 7 of 2017. But you can't keep a five-time Pro Bowl receiver down for long. His slump will be yesterday's news after this game.

And then we have the Titans. Their Week 2 performance was — to put it nicely — lackluster.

In the Titans' loss on Monday night, running back Derrick Henry was held to 13 carries and 25 rushing yards. And now they're getting ready to face a Raiders team that is holding teams to an average of 3.7 yards per rushing attempt. If the Raiders keep that defense up, King Henry and the Titans' rushing offense has another tough weekend ahead.

We're rolling the dice on Vegas to get that elusive first W.

Prediction:
Raiders by 4 to 5 points

We're guessing the Ravens are wishing on every star in the Maryland skies that they could take back the fourth quarter of their game against the Dolphins. Tua & the Fins staging a late-game, 21-point, fourth-quarter comeback to seal the victory had to have been as shocking as it was deflating for the Ravens.

But perhaps the surprising 42-38 loss at Miami will be the motivation Baltimore needs to get back on track at New England.

Currently, at FOX Bet, the Ravens are favored by 3 points in this upcoming matchup. That's great news for Baltimore QB Lamar Jackson. Lamar looks like he's on a mission this year, and he is 13-4 as a starter in his career when he's a road favorite.

This is also bad news for Mac Jones and his Pats. The QB is 2-4 as a starter throughout his career when he's an underdog.

You also need to know that John Harbaugh brings his A-game when he's up against the AFC East. He's 18-10 against opponents from that division over his career as a head coach.

But you never know what tricks New England coach Bill Belichick will have up his cut-off sleeves. After all, he engineered a 17-14 win against the Steelers last week. However, we are taking Baltimore to bounce back in Week 3 with a W.

Boy, oh, boy. The Baker Mayfield chapter in Carolina has started off just as we expected. And that's why we're just going to start off by saying this:

It might be time for the Panthers to panic, but that's a conversation for another day.

In the meantime, here's something more pressing that makes matters worse for the home team Panthers. The Saints have legit put in work against Carolina over the last eight years. Since 2014, New Orleans is 10-6 against Carolina. And when the Saints go marching in on the road against NFC South foes, they are 15-7 since 2015.

At FOX Bet, the Saints are currently 3-point favorites. Look for New Orleans to bounce back from last week's loss to Tampa Bay in a big way. We like the Saints in this matchup but by double that spread.

Let's talk about the Evolution of Jalen Hurts. His pocket passing has improved, his decision-making has matured and his Eagles currently boast one of the top five scoring offenses in the league. This improved Hurts was on full display in Philly's Monday night meeting with Minnesota — a matchup the Eagles won 24-7.

You love to see it. Unless you're the opposing team, that is.

Can the Commanders hold off the soaring Eagles this weekend when they host their NFC East rivals?

According to how things have panned out between these two squads over recent years, it's a no.

Now here's a snapshot of the Commanders' record.

While Washington is 1-1 this season, the team is 8-16 when its faced NFC East opponents since 2018. And the squad is 3-8 under coach Ron Rivera when a home underdog. The Commanders are currently 4-point dogs to the Eagles. And they're coming off a 36-27 loss to Detroit.

Not looking good for the Washington football team.

Prediction:
Eagles by 4 to 5 points

America's Game of the Week on FOX (4:25 p.m. ET on FOX and the FOX Sports App) highlights the Week 3 schedule. This game calls for popcorn.

And we're talking a big tub of movie theater popcorn soaked in butter and salt. You can't have anything less for the season's first meeting between all-time great Aaron Rodgers and GOAT Tom Brady.

And Brady's the GOAT for a reason. He's 123-21 as a home favorite over his career. So Tom protects the turf at home.

And when Tom and A-Rod have squared off with each other in the regular season, Timeless Tom has the 2-1 edge. Another advantage Tampa Bay has going into this game is its stout defense. The Bucs' top-ranked defense is allowing opponents an average of just 6.5 points per game.

Is anything working in Green Bay's favor as they head south as 2.5-point underdogs?

Well, they do have a 7-4 record as road dogs under coach Matt LaFleur. Also, Tampa Bay wide receiver Mike Evans will be suspended after getting in an altercation in Week 2. That means Green Bay's defense has one less offensive threat to scheme for. If Tampa Bay's WR Julio Jones does play, it's no secret that he's not 100%, giving Green Bay another advantage. Oh, and another Bucs receiver, Chris Godwin, could be out again with an injury. Guess this will be the game TB12 ends up throwing and catching the ball himself.

It's going to be tough for the Bucs to topple the Pack. This will be close, but we're going Cheese Heads.

Open your FOX Bet Super 6 app and make your selections before Sunday's games kick off. Remember to tag us across all our social media handles @FOXSuper6 and @EricaReneeD and to show us your picks using #EricaSuper6.