Braden Rumpit has a cool, if fairly typical diving backstory. It started as a kid. He competed in club and high school, winning the state championship in 2019 and landed a spot on the Badgers squad.

BROOKFIELD, Wis. - Look up in the sky! It's not a bird, it's not a plane, it's high diver Braden Rumpit.

"Every time you go up higher, the pool looks smaller and smaller," said Rumpit.

Rumpit has a cool if fairly typical diving backstory. It started as a kid. He competed in club and high school, winning the state championship in 2019 and landed a spot on the Badgers squad.

And then everything changed after his freshman year.

"Over the summer, I was looking for a job and I saw a posting on Instagram from another high diver and he basically said, 'I'm looking for a high diver, ace up. Does anyone want to do it?'" Rumpit said. "I direct messaged him and I was like, 'I'd love to do it.'"

A week later, Rumpit was in Alabama, where he spent the summer participating in high dive shows with the emphasis on show. The more he could do in the air, the more reaction he got from the crowd.

"The biggest thing is to break up your dives into each individual component and do those at lower heights," said Rumpit. "So just off the side of the pool, like maybe a foot above the water. You would practice your takeoff a whole bunch of times. And then from three meters, you would practice the flight of the dive, all of the flips and the positions and all of that. And then from about 10 meters, you work on the entries then come out and spotting the water and making sure that you're tight to survive and withstand the impact." 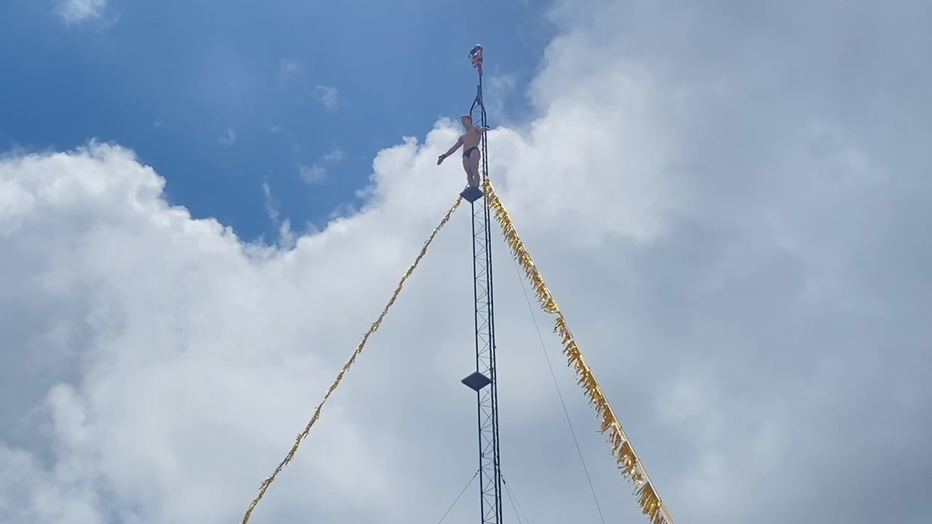 In traditional competitive diving, 10 meters is the highest height a diver would enter the waterfront. In Rumpit's new life, he's at least double that.

"This kind of works really well for me because I'm an engineer, so you can kind of do the calculations and see, "Oh, it takes 1.4 seconds to fall 10 meters, but it takes about two point three seconds to fall from 27 meters," Rumpit said. "So then you can kind of take the number of flips that you're doing on 10 and being like, "OK, so I have an extra second. I can probably add maybe two flips." And then from there, you just have to do a lot of visualizations and a lot of drills to make sure that you can do it safely."

Rumpit says safely and survive because those concepts accompany him all the way up and all the way down as a high diver. He also peppers his conversations with fun, but doesn't use a different f-word.

"I wouldn't say I'm fearless because every time I got up there, there's a little bit of fear," said Rumpit. "Sometimes there's a lot of fear, but you just have to manage it and believe in yourself and trust your preparation."

More than 60 years after they left, a group of Pius XI High School graduates and a former teacher walked the halls of their alma mater. It was an adventure that brought back cherished memories.