NASCAR returns to FOX with 64th running of Daytona 500

DAYTONA BEACH, Fla. - The 2022 Daytona 500 kicks off on Sunday with 40 drivers competing in the 64th running of the Great American Race.

"We have good hot rods here," Buescher said. "They are fast and they handle good. I knew we were in good shape that whole race."

He won the race on the 60th and final lap of the second qualifying race for the Daytona 500 when leader Joey Logano wrecked trying to block Buescher's run. Logano, who was visibly angry after wrecking his Team Penske Ford, said he misjudged Buescher's closing rate.

Across the speedway, Logano's former Penske teammate was making his second trip to victory lane of the night.

Keselowski celebrated a huge first night of Daytona racing as both the team owner and its driver. He left Penske in November for an ownership stake of Jack Roush's organization — now called RFK Racing for Roush Fenway Keselowski — and is now the driver of Roush's flagship and original No. 6 Ford. 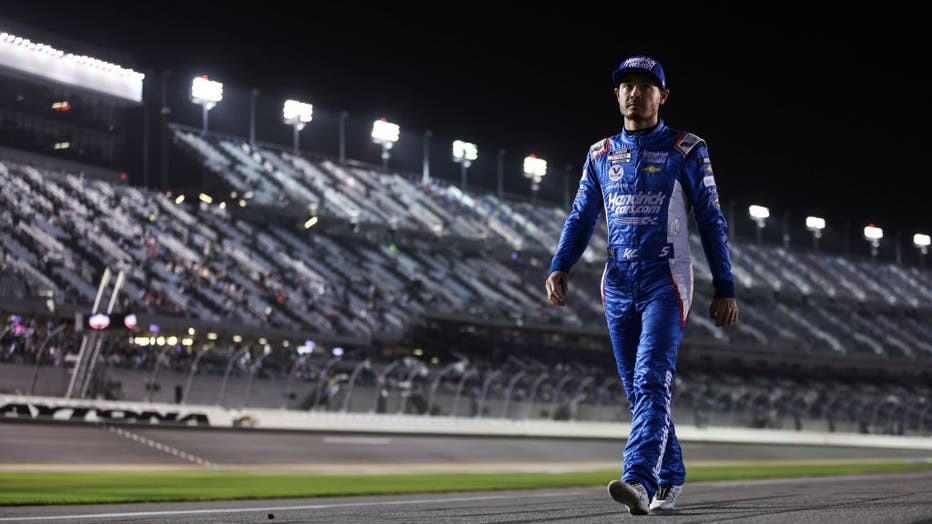 Floyd Mayweather Jr. will also make his NASCAR debut Sunday when The Money Team Racing starts the Daytona 500. Kaz Grala drove the No. 50 Chevrolet into the race with a pass of J.J. Yeley on the final lap of the first race.

Six teams came to Daytona battling for four "open" spots in Sunday's 40-car field. Two spots were filled in time trials — former Formula One champion Jacques Villeneuve will make his Daytona 500 debut, as will Noah Gragson for Beard Motorsports — and one spot was available in each of the two qualifying races.

Grala earned one of them with a pass for 18th on the final lap of the first race. NY Racing, a team owned by Black entrepreneur John Cohen, raced its way into the Daytona 500 in the second race. The team pulled Greg Biffle out of semi-retirement and at 52, Biffle will be the oldest driver in the field Sunday when he makes his 15th career Daytona 500 start.

Grala said "the word on the street" was that his boss Mayweather would be at Daytona International Speedway on Sunday, but the team face-timed with the retired boxer from the starting grid.

The Daytona 500, essentially NASCAR’s version of the Super Bowl, has been sold out for about a month with an expected crowd Sunday of more than 120,000. The 500 is the official kickoff, though NASCAR opened two weeks prior to "The Great American Race" with a star-studded, experimental exhibition inside the Los Angeles Memorial Coliseum.

Here are the 40 drivers competing in the 2022 Daytona 500, in order of starting position:

Meanwhile, Larson will lead the field to green Sunday in the debut of NASCAR's new Next Gen car. The new car was a collaborative project between NASCAR and its stakeholders and the car is designed to cut costs, help smaller teams close the gap on the big guys, make it cost capable for new ownership to enter the sport and give the manufacturers greater brand identity.

NASCAR's Next Gen Mustang: A look at new car and future of racing

Ford Performance Program Engineer Richard Johns talks about NASCAR's Next Gen Mustang and the future of race cars in the sport.

The pandemic delayed the car a year and the Next Gen didn’t see racing action until the Coliseum, where it ran just fine. The car held up well in car-to-car contact — "we can bump and bang," Clash winner Logano declared — but it's still a wildcard.

NASCAR held an industry crisis meeting in Nashville in December to hash out driver concerns about performance, and many of those same drivers now sit on a seven-person board of directors of a "Driver Advisory Council" announced last week.

The council gives the drivers an organized voice to push for tweaks or change.

"Communication from drivers to other stakeholders in our industry has been a challenge for years. This will most definitely help clarify feedback from drivers," said Logano, a board member. "Safety, fan experience and a great on-track product are just some of the goals."

RELATED: Race events take over Daytona Beach ahead of Daytona 500