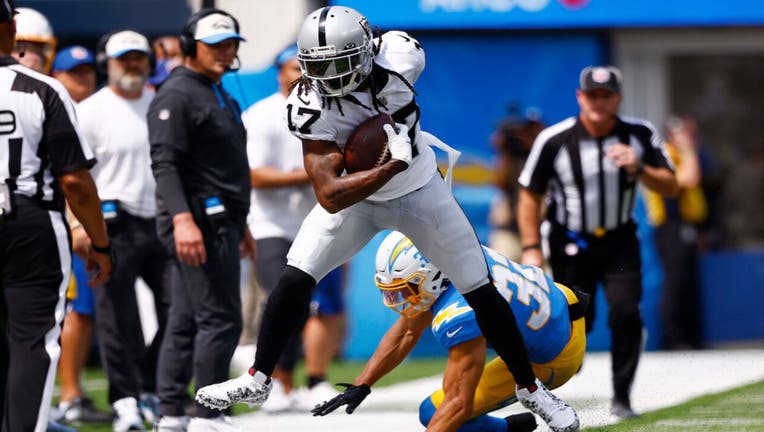 The game was a rematch of last season's finale, which Las Vegas won on a field goal in the final seconds of overtime to knock the Chargers out of a playoff spot.

Herbert completed 26 of 34 passes and had a 129.4 passer rating despite Keenan Allen leaving with a hamstring injury in the first half and Mike Williams not having a catch until the fourth quarter.

Derek Carr was 22 of 37 for 295 yards and two touchdowns but was picked off three times. He connected 10 times with former Fresno State teammate Davante Adams, who was acquired from Green Bay in the offseason. Adams had 141 receiving yards, including a 2-yard touchdown in the fourth quarter.

All three of Herbert's TDs went to players added during the offseason. Fullback Zander Horvath, a seventh-round pick, and DeAndre Carter scored in the second quarter to give the Chargers a 17-3 lead at halftime.

Gerald Everett had an 18-yard TD reception midway through the third quarter where he dragged Raiders safety Roderic Teamer the final 3 yards into the end zone to make it 24-10.

The Chargers' defense also benefited from its new additions. Besides Mack's standout performance, Bryce Callahan jumped a route on a ball intended for Darren Waller for an interception in the fourth quarter.

It was the second time in his nine-year career Carr was picked off three times and the first since the 2018 opener against the Los Angeles Rams.

The drive ended with Daniel Carlson's 23-yard field goal to tie it at 3.

Chargers: Allen had four receptions for 66 yards before his injury. He had a 42-yard catch on the second-quarter drive that ended with Horvath's 1-yard TD catch that gave the Chargers a 7-3 lead.