BRUSSELS — No matter who wins, this year's Tour de France will see a changing of the guard.

And if the names of Wout Van Aert, Kasper Asgreen, Enric Mas or Caleb Ewan don't ring a bell now, they might soon be on everybody's lips.

In the absence of many stalwart riders who have stamped their mark on cycling's marquee event in recent years, new faces will emerge this summer.

There is a long list of top riders missing the Tour, which starts on Saturday from Brussels with a 194.5 kilometer (120.8-mile) stage through Flanders and back to the Belgian capital, and that number includes:

The generational change is likely to be the most visible in the fight for the race leader's yellow jersey, as 22-year-old Egan Bernal seems ready to take over from his leader at team Ineos, defending champion Geraint Thomas. 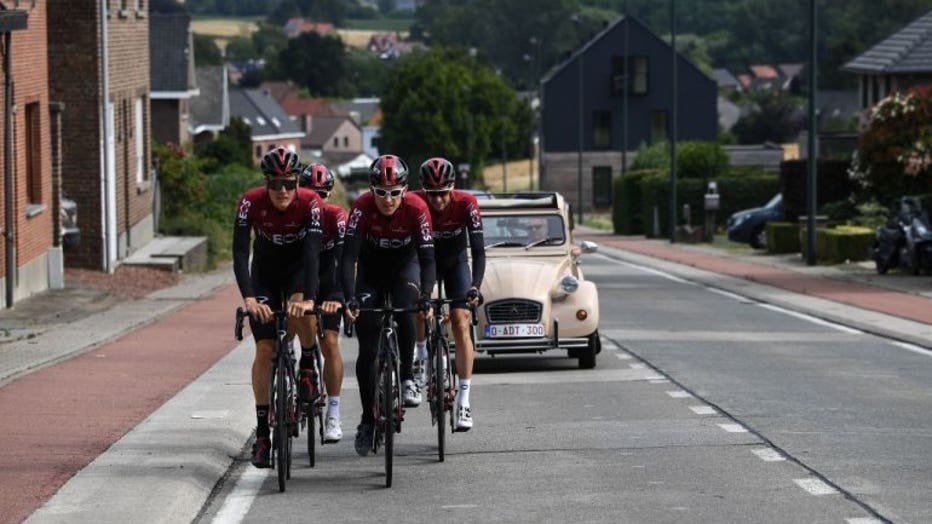 A Citroen 2CV car overpasses British rider Geraint Thomas (frontR) and teammates as they take part in a training session of Great Britain's Team Ineos cycling team in Overijse on July 5, 2019, on the eve of the start of the 106th edition of the Tour

In the wake of an already successful season during which he won the Paris-Nice and Tour de Suisse weeklong races, Bernal has been elevated to a co-leader status after Froome, who also rides for Ineos, was ruled out because of a horrific crash last month.

Despite his lack of experience — he will start his second Grand Tour — Bernal is showing an impressive maturity.

"I think you have a physical age and a mental age, but when you're ready, you're ready," Ineos team boss Dave Brailsford said on Friday. "He's ready."

Many former Tour winners including Eddy Merckx and Alberto Contador have picked Bernal as their favorite to win a race that features several grueling mountainous stages this year. They expect the diminutive Colombian climber to grab the spotlight when the Tour reaches the high-altitude summits in the last 10 days of racing. 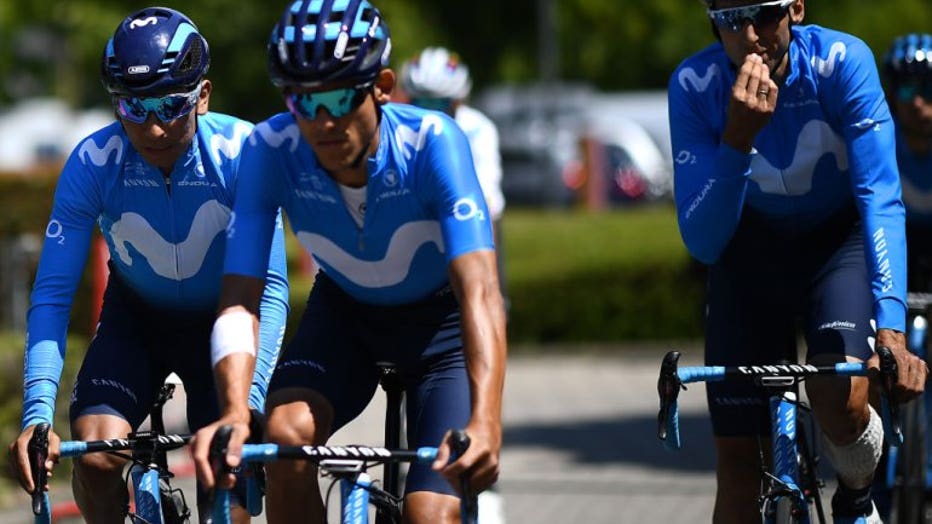 Colombian rider Nairo Quintana (L) and teammates leave for a training session of Spain's Movistar Team cycling team near Brussels on July 5, 2019, on the eve of the start of the 106th edition of the Tour de France cycling race. - On Saturday, July 6,

Before that, there will be many opportunities for the 33 riders making their first Tour appearance to show off their skills and challenge the supremacy of their elders — starting Saturday.

"We will see riders who dare to attack, who try their luck, riders who race in an old-fashioned way," Tour director Christian Prudhomme said. 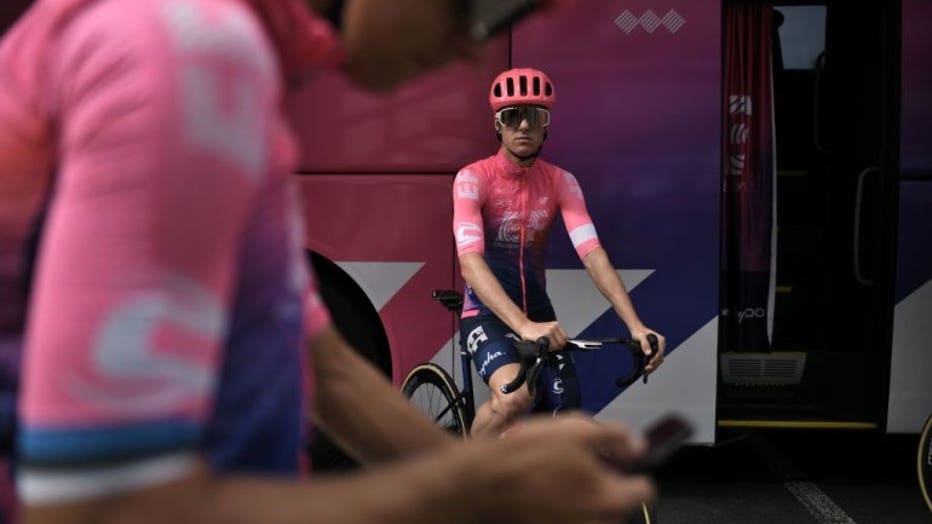 Australian rider Simon Clarke waits before a training session of USA's EF Education First cycling team near Overijse on July 5, 2019, on the eve of the start of the 106th edition of the Tour de France cycling race. - On Saturday, July 6, the 106th ed

The opening stage features two short climbs usually taken during the one-day classic Ronde van Vlaanderen and a stretch of cobblestones and also passes through Merckx's childhood home. The day's main difficulties come too early to have a real impact on the final result, though, and the stage is likely to end in a bunch sprint that could award the first yellow jersey to a Tour debutant.

"It is a stage that I can win and I know the team and I really want to win the first stage," said Ewan, Australia's new sprint sensation.

The 24-year-old Ewan, who rides for Belgian outfit Lotto-Soudal, is among an exciting group of competitors that will try to derail three-time world champion Peter Sagan's ambition to claim a record seventh green jersey, which is awarded to the best sprinter. 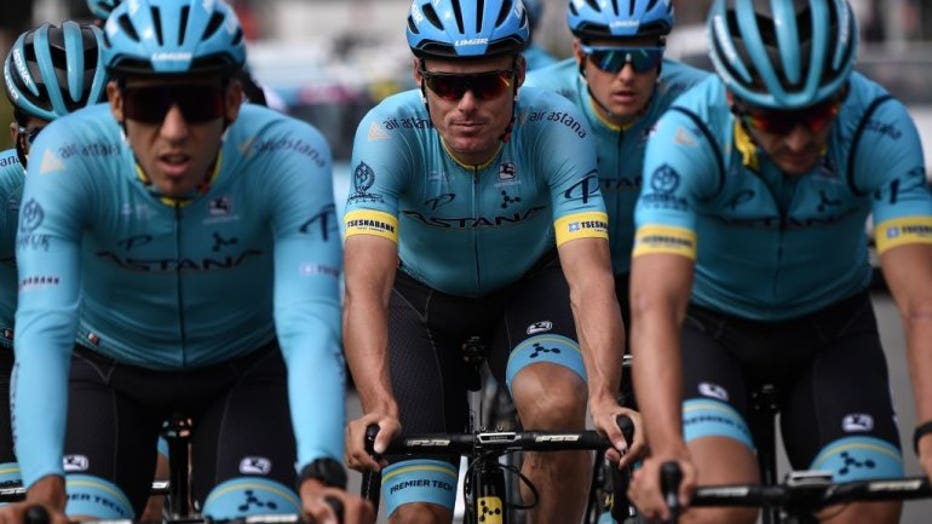 Spanish rider Luis Leon Sanchez (2ndL) and teammates take part in a training session of Kazakhstan's Astana Pro Team cycling team near Brussels on July 5, 2019, on the eve of the start of the 106th edition of the Tour de France cycling race. - On Sat

"It's a massive motivation for me that it's in Brussels," Ewan said. "Obviously it's never going to start in Australia so the next best thing would be to start in the home country of your team, and it's pretty special my first stage is this one. If there was any stage I would pick to win this year, it would be this one, because it means the yellow jersey too."

Among others riders ready to surge to the fore, Van Aert is certainly the most promising. A three-time cyclo-cross world champion, the 24-year-old from Belgium is riding his first Grand Tour this summer after claiming two stage wins — a sprint and a time trial — at the prestigious Criterium du Dauphine in June.

"Wout Van Aert is part of a terrific generation," Prudhomme said. "He won back-to-back stages at the Dauphine. He was formidable. I don't know who will be wearing the yellow jersey on July 19, but I have an idea about the favorite of the individual time trial scheduled that day."

Van Aert's versatility and physical skills make him dangerous on all grounds except the high mountains, although his lack of experience should limit his ambitions to a second-fiddle role in support of Jumbo-Visma team leader Dylan Groenewegen. The 26-year-old Dutch rider is another who has a good chance of being covered in yellow after Saturday's opening stage. He claimed two stage wins last year and has 10 victories to his name in 2019.

The Deceuninck-Quick-Step team is also bringing a pair of 24-year-old newcomers to the Tour — Mas and Asgreen. In his first full professional season, Asgreen won the time trial at the Danish championships and finished runner-up at the Ronde van Vlaanderen. He will ride in a domestique role for Mas, the runner-up at last year's Vuelta.