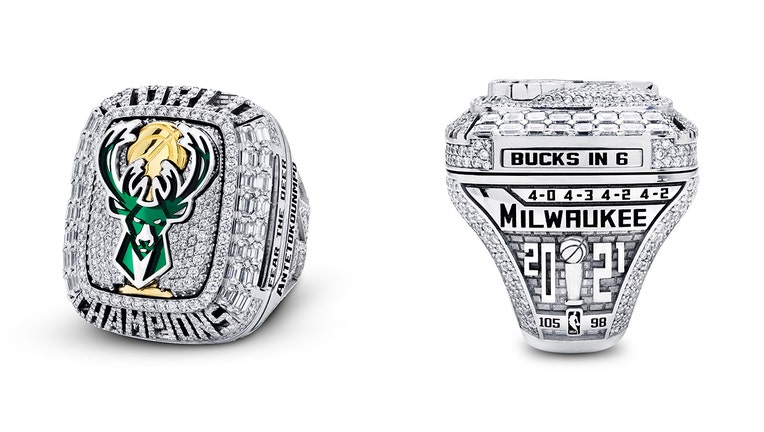 MILWAUKEE - The Milwaukee Bucks on Tuesday, Oct. 19 commemorated their 2021 NBA championship during the season opener – featuring a ring ceremony and banner unveiling prior to tipoff against the Brooklyn Nets at Fiserv Forum.

"We are thrilled with the spectacular and incredibly detailed championship ring designed by Jason of Beverly Hills," Bucks and Fiserv Forum President Peter Feigin said. "The ring vividly tells the story of the Bucks history and stunningly celebrates our 2021 NBA Championship. We thank Jason and his team for creating such a remarkable ring that the Bucks will wear proudly and cherish forever."

There are two trophies on the inside shank to represent the two franchise championships, and Fiserv Forum’s architecture is also featured on the side of the ring. The NBA Larry O’Brien Trophy on the face of the ring is made up of a signature batch of 65.3% purity yellow gold to represent the season-winning percentage. Even the carat weight of the stones has meaning. Approximately 3cts of stones on the shank represent the three conference championships in Bucks history. The approximately 0.53cts on the World Champions wording on the ring represents the total years the Bucks have been in existence.

There are even hidden details in the ring that cannot be seen. The ring has a removable top that reveals a QR code that when scanned plays a video highlighting memorable moments from the season.

When it came to the rings, there was only one thing the NBA Finals MVP wanted.

"I said I want my ring to be bigger than my brother's," Giannis Antetokounmpo said. "You know I'm joking. But, you know, Kostas is my brother, showed me his ring, it was huge. It was like a AirPod case. It was huge. So, I said at least you guys don't sell us short, give us a big ring also, you know."

Following the Ring Ceremony, the Bucks’ 2021 NBA Championship banner was unveiled in the west rafters of Fiserv Forum.

Pat Connaughton told FOX6 News earlier that he will be looking up more often now that they have their own banner.

Tuesday's entrance was one Bucks fans young and old had been waiting for.

"It’s a dream come true. The Bucks are my first team that I actually picked to win a championship. I’ve never been able to be a part of a ring ceremony, banner going up," said fan Nigel Rayford.

Antetokounmpo and the rest of the team got their rings. The last time he played at Fiserv Forum, he scored 50 points to help win it all in Game 6.

"He was winning, like the Bucks were winning," fan Thiago Ramos-Rodriguez said.

As each player made their entrance, fans knew they were witnessing history. For the first time in 50 years, a new banner went up.

"A lifetime, a lifetime," said fan Karen Vanheiriseele. "I feel like I’m a part of it."

With high energy to start the season Tuesday, fans hoped the ceremony would not be a once-in-a-lifetime experience.

"The crowd, everything. Everybody’s so up and dancing," Vanheiriseele said.

Commemorative championship rings and jewelry will be available for fans to purchase at Bucks.com or at the Bucks Pro Shop. For more information on these items, fans can visit Bucks.com.