MILWAUKEE - Milwaukee Brewers players Brent Suter, Daniel Norris and Willy Adames are committed to excellence on the field. Now, they're trying to win away from the diamond by hitting on a big cause.

"I’d say the Brewers are one of the top teams, if not the top, for environmental consciousness in the league," said Brent Suter, Brewers pitcher.

The trio are part of a group of seven Brewers who are Players for the Planet Ambassadors. Teaming up with SC Johnson, they took part in a panel discussion inside American Family Field for faculty and collegiate students from local universities to talk about protecting the environment, what role they can play in helping the planet, and how they can reduce their plastic footprint.

"We know we have to do something to change our culture because we know we have to be better at it," said Willy Adames, Brewers shortstop. "For me to see how much plastic and all those things that we throw into the ocean you know, I know if I can help, I'm willing to do that."

Brent Suter believes it's up to the players to lead the way in creating change.

"If we can have one of those annoying guys on every team, it creates a couple of other annoying guys and it builds that momentum, that's what we're trying to do eventually," said Suter. "The fact that I have another annoying guy on this team is incredible. It's just about perseverance. This is what this movement is going to take."

That guy is fellow pitcher Daniel Norris, who came to Milwaukee from the Detroit Tigers. He's been impressed with what the Brewers are doing.

"Coming over here to the Brewers and seeing the footprint that Brent has put down massive," said Daniel Norris, Brewers pitcher. "I don't feel like I have to be the annoying guy because he's the one who is always on people, so it's great."

In fact, Norris has always been sustainable. He's been living in a van every offseason for the last decade. By doing so, it's opened his eyes to a lot. 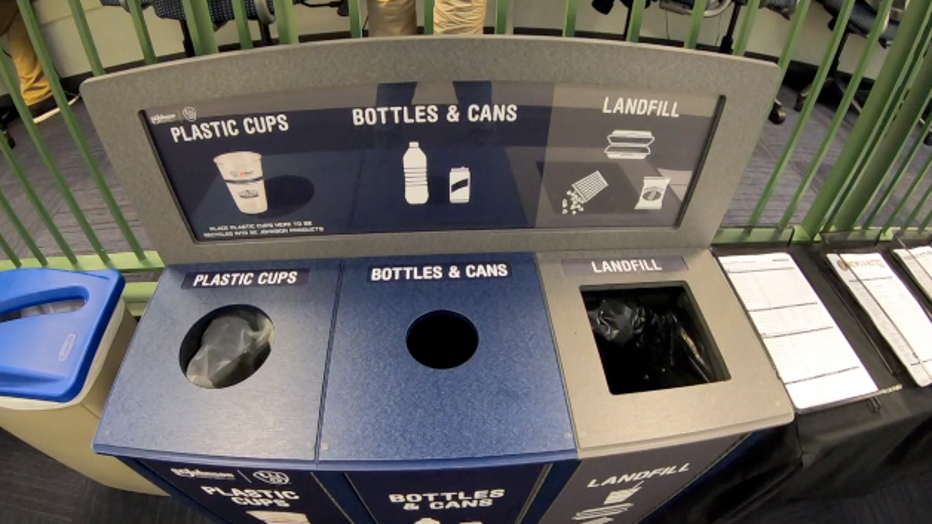 "Being in a van for two, three, four months a year, you really have to kind of consolidate everything you have, whether that's the clothes you wear, what you use to cook your food, how you get your food," said Norris. "Whatever it might be, it just kind of comes natural with that as far as like just being comfortable in a van because it's not very big. As the years went on of me doing that, I really started learning like okay I need this, I don't need this."

That mindset has trickled into their clubhouse, and the Brewers are doing their part.

"Some of us have reusable, to go containers for our food," said Suter. "We have Gatorade bottles passed out to everybody for their refillable water bottles last year, and some guys are still using it."

They're hoping to educate the younger generations to be sustainable as well.

For an added incentive, for every save made by a Brewers pitcher this regular season, SC Johnson and the Brewers will be donating money to Players for the Planet to help support the reduction of ocean plastic waste.

Aaron Rodgers is focused on the Green Bay Packers offensive line as training camp draws to a close, the team chasing a Super Bowl win.

Ted Davis, who has served as the Milwaukee Bucks radio play-by-play broadcaster since 1997, has retired.