PITTSBURGH  — Eric Sogard doubled home Brock Holt in the 11th inning and the Milwaukee Brewers rallied for a rain-delayed 6-5 win over the Pittsburgh Pirates on Monday night.

The Brewers trailed by four entering the ninth but took advantage of another shaky performance by the Pittsburgh bullpen to force extra innings. Ryan Braun's two-out, two-run double off Kyle Crick drew Milwaukee even. 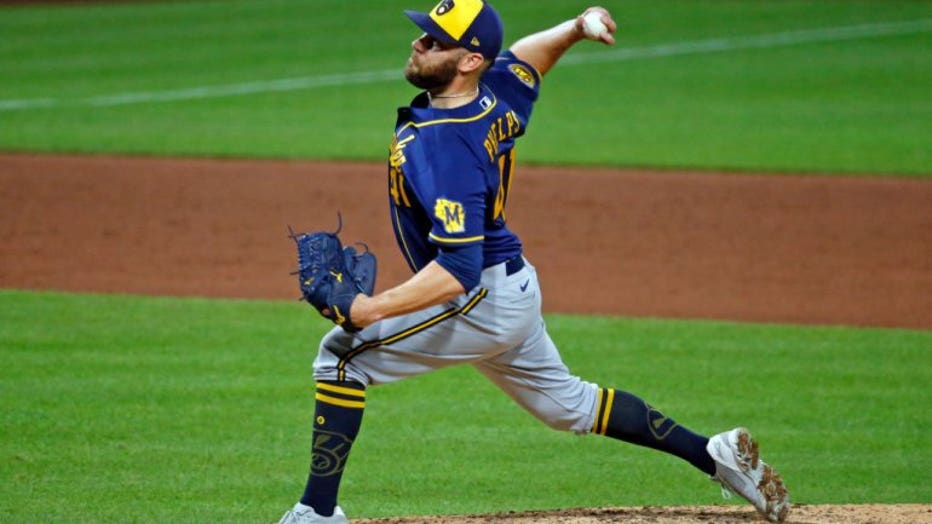 David Phelps #41 of the Milwaukee Brewers pitches in the eleventh inning against the Pittsburgh Pirates during Opening Day at PNC Park on July 27, 2020 in Pittsburgh, Pennsylvania. (Photo by Justin K. Aller/Getty Images)

Pirates reliever Dovydas Neverauskas (0-1) escaped the 10th unscathed under Major League Baseball's new rule that puts a runner on second base to start each extra frame. The only Lithuanian-born player in MLB history couldn't do it again in the 11th. Sogard scorched a pitch down the left-field line to plate Holt and give the Brewers their first lead.

David Phelps (1-0) struck out Bryan Reynolds with the potential tying run on third in the bottom of the inning to end it.

“It was a frustrating night offensively,” Milwaukee manager Craig Counsell said. "We did a lot right in the ninth. The other innings, you know, we left a lot of stuff out there. But we did a great job in the ninth inning, lots of guys.” 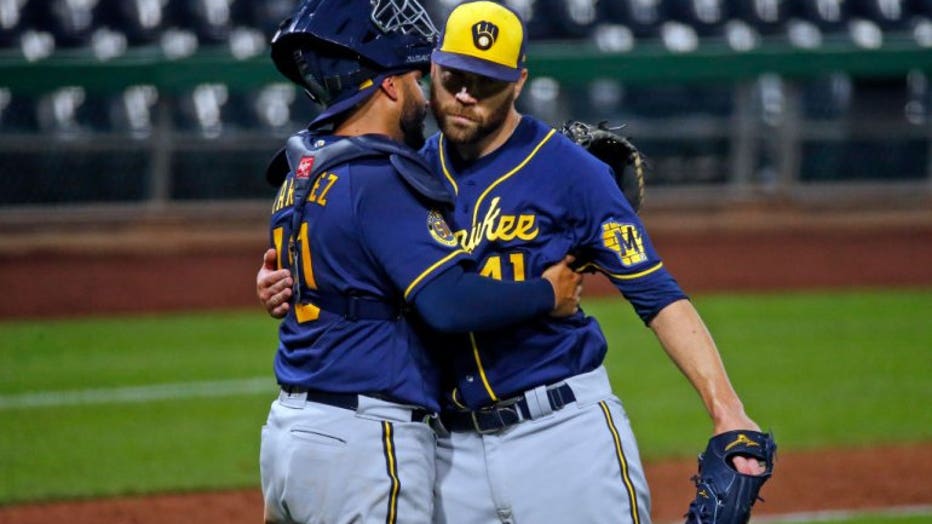 David Phelps #41 of the Milwaukee Brewers celebrates with Omar Narvaez #10 after defeating the Pittsburgh Pirates 6-5 on Opening Day at PNC Park on July 27, 2020 in Pittsburgh, Pennsylvania. (Photo by Justin K. Aller/Getty Images)

Colin Moran homered twice, including a 438-foot shot that bounced into the Allegheny River, for the Pirates.

Moran sent a liner to the seats in right field in the second immediately after a 1 hour, 42-minute rain delay. He put the Pirates ahead 2-1 in the seventh with a long drive over the right-field stands off reliever Devin Williams that wound up in the water.

Veteran outfielder Jarrod Dyson, signed to a one-year deal on the eve of spring training, gave Pittsburgh a 4-1 cushion two batters later when he lined a two-run single over the outstretched glove of second baseman Keston Hiura. Another run scored on a wild pitch to make it 5-1. 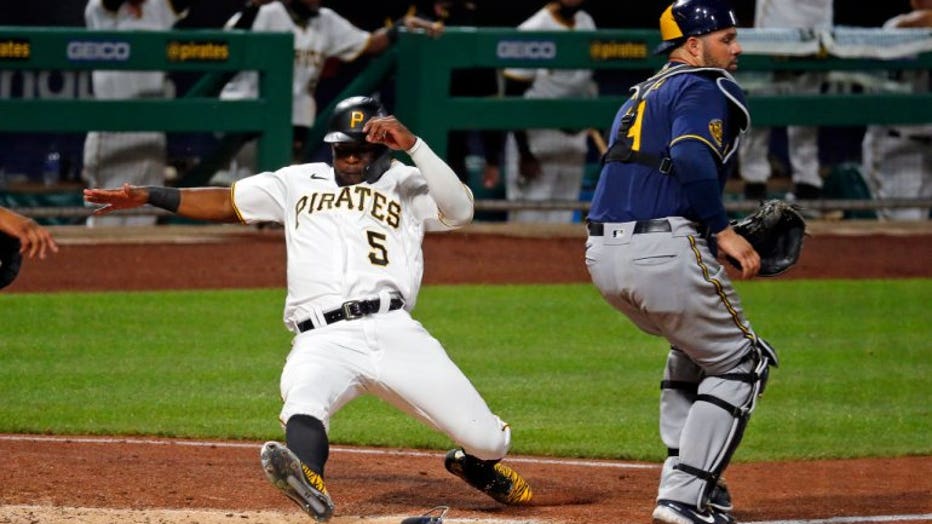 Guillermo Heredia #5 of the Pittsburgh Pirates scores on a two RBI single in the seventh inning against the Milwaukee Brewers during Opening Day at PNC Park on July 27, 2020 in Pittsburgh, Pennsylvania. (Photo by Justin K. Aller/Getty Images)

The Pirates are without closer Keone Kela, sidelined due to COVID-19 concerns. Nick Burdi, who pitched the ninth in a win over St. Louis on Sunday, was unavailable. The guys remaining couldn't hold it. Pittsburgh reliever Michael Feliz hit Hiura with a pitch to force in a run and Christian Yelich had an RBI groundout before Crick came on to try and close it out for his third career save.

Braun instead zipped one to left field to tie it.

The Pirates planned to “piggyback” left-hander Steven Brault and right-hander Chad Kuhl early in the season, part of an experiment by first-year manager Derek Shelton. Brault threw two scoreless innings before the skies opened up. 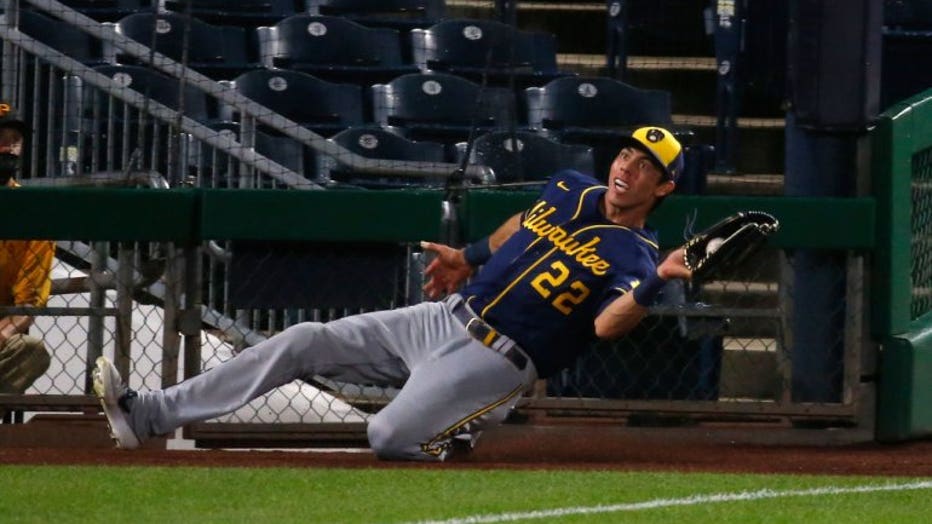 Christian Yelich #22 of the Milwaukee Brewers makes a catch in the seventh inning against the Pittsburgh Pirates during Opening Day at PNC Park on July 27, 2020 in Pittsburgh, Pennsylvania. (Photo by Justin K. Aller/Getty Images)

Kuhl, whose previous 61 appearances in the majors were as a starter, replaced Brault after the delay and worked 3 2/3 innings, allowing three singles and two walks against four strikeouts.

“Coming back from what he’s done and first time being on the mound, I thought he executed pitches,” Shelton said of Kuhl. "I thought his ability to throw breaking balls really good (was good). So happy with the fact that his first outing out that he looked as good as he did. He did a really nice job.”

The pomp and circumstance of Pittsburgh's 139th home opener and first game at PNC Park in 10 months was replaced by a more muted display. The short pregame festivities included a national anthem sung by an 18-year emergency room clerk and a video highlighting the club's intent to “amplify” voices — including the voice of All-Star first baseman Josh Bell, who is Black — in the call for social justice.

Brewers: Barring a setback, LHP Brett Anderson (blister) should come off the injured list Friday. ... Holt (ankle) made his first appearance of the season when he entered as a defensive substitution in the ninth.

Pirates: RF Gregory Polanco made his season debut after testing positive for COVID-19 during summer camp. Polanco went 0 for 2 with two walks in his first game since June 16, 2019.

Brewers: Josh Lindblom will make the second start of his major league career on Tuesday. The 33-year-old Lindblom last pitched in the majors while appearing in four games for the Pirates in 2017.

Pirates: Veteran left-hander Derek Holland makes his first start for the Pirates after making the club out of summer camp as a non-roster invitee. Holland went 1-5 with an 8.10 ERA as a starter last season for San Francisco before working out of the bullpen for both the Giants and Cubs.