MILWAUKEE -- Thanks to the success of last season’s inaugural series, the Brewers are proud to announce two Postgame Concerts in 2016. 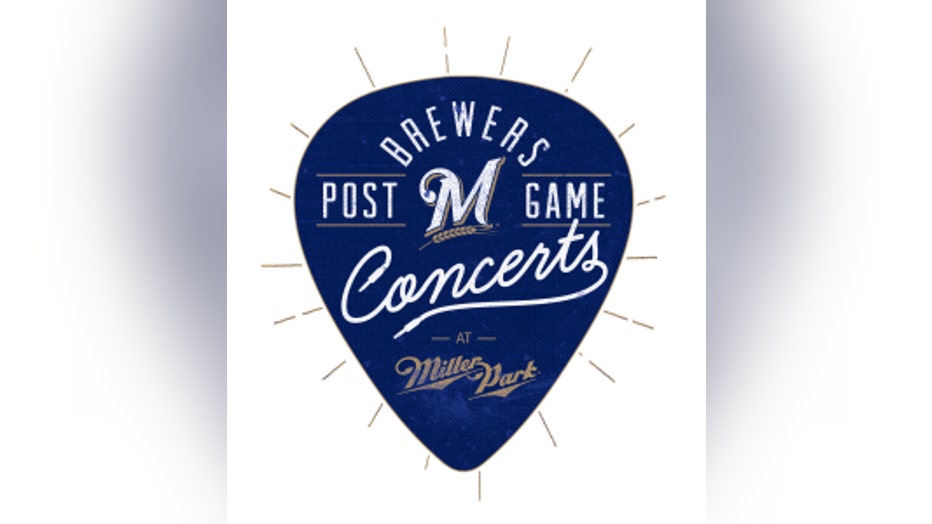 On Saturday, May 14, the Brewers will welcome one of the music industry’s hottest stars to Miller Park as multi-Platinum pop artist Andy Grammer will perform a full-length, free postgame concert, courtesy of Pick ‘n Save, following the Crew’s matchup with the San Diego Padres.

Then on Saturday, August 27, country music star Kip Moore will take the stage following the Brewers vs. Pirates, presented by 94.5 KTI Country.

Both shows are FREE to all fans with a valid ticket for that night’s contest and will begin approximately 30 minutes after the conclusion of the game.

Beginning tomorrow at 9 a.m., fans can guarantee their spot through a special Postgame Concert presale at brewers.com/concerts. For $89, fans can purchase a special VIP Ticket Package that includes a Club Outfield Box seat for the game and a Field Pass for the postgame concert. On-field passes are extremely limited, and the only way to guarantee field access is through this special VIP Package. An option to purchase a $49 ticket in Loge Infield Box is also available.

This special presale will remain open through next Friday, February 12 at 11:59 p.m. CT. However, quantities are limited, so fans are asked to act quickly to guarantee their spot.

Andy Grammer
From hustling street performer to Platinum-selling recording artist, Andy Grammer’s ascent to stardom has been nothing short of remarkable. The 32-year-old singer/songwriter has gone from relative unknown to industry icon performing alongside Taylor Swift, Train and Colbie Caillat in just a few years’ time. With his 2011 self-titled debut album, Grammer became the first male pop star in a decade to reach the Top 10 at Adult Pop Radio on his first two singles, “Keep Your Head Up” and “Fine By Me,” certified Platinum and Gold respectively.  Grammer would reach even greater heights with the release of his second album, Magazines or Novels, which featured the #1 smash-hit, “Honey, I’m Good.” One of the best-selling songs of 2015, “Honey I’m Good” achieved Triple-Platinum status and soared into the Top 10 on the Billboard Hot 100.  Grammer would continue his success with the release of his chart-topping song, “Good to be Alive (Hallelujah),” the second single off his deluxe edition of Magazines or Novels.

After a busy 2015 that included joining the cast of Dancing with the Stars as well as live performances on Good Morning America, the Macy’s Thanksgiving Day Parade and Game 1 of the World Series, Grammer is looking forward to continuing his emergence as one of the music industry’s hottest stars with an even bigger 2016.

Kip Moore
Singer/songwriter Kip Moore quickly established himself as one of country music’s premier rising stars when he shot out of the gate with his debut album Up All Night spawning three number one smash hits including “Beer Money,” the Platinum certified “Hey Pretty Girl,” and Moore's Double Platinum breakout hit “Somethin' 'Bout A Truck.”

A relentless road warrior, multi-Platinum singer/songwriter Kip Moore recently kicked off the second leg of his Wild Ones Tour that will include a string of headlining dates in the UK and Ireland as well as shows scheduled in Australia for the first time.  Moore's new single “Running For You” was heralded by Billboard as “a career song from the album” and was the most added song in country radio in its debut week.  The single is taken from Moore’s critically-acclaimed second album Wild Ones - declared by Huffington Post as “one heck of an album… set to produce hit after hit after hit” while Entertainment Weekly proclaims it “reaches for the stadium’s nosebleeds.”


All fans who purchase tickets to either game will automatically have access to that night’s free postgame concert. Single-game tickets will be priced according to the Brewers’ demand-based pricing model, and will be available when 2016 single-game tickets go on sale.

To access the presale, fans can go to brewers.com/concerts beginning at 9 a.m. tomorrow. Season ticket packages including both postgame concerts, Opening Day and All-Fan Giveaways are on sale now. For additional tickets and other info, fans can call (414) 902-4000 or visit Brewers.com.