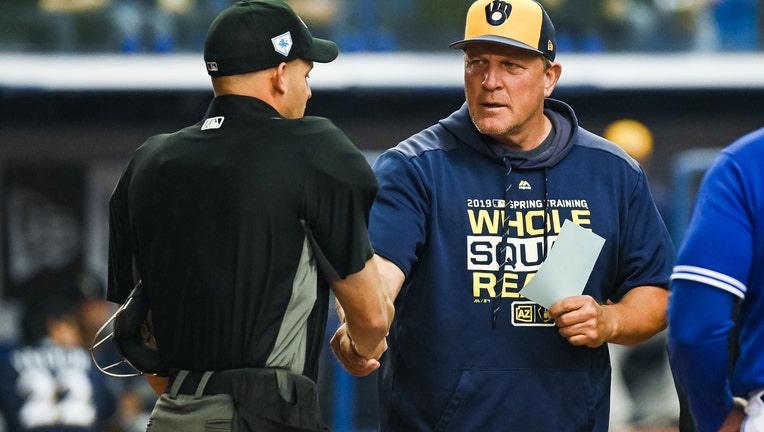 Murphy said he was feeling “pretty good” while talking to reporters before the Brewers’ game Friday night against with the Kansas City Royals. Murphy said he had hoped throughout his recovery he would be back before the end of the season.

“The part you take for granted sometimes until you don’t have it anymore is the connection, being together,” Murphy said. “That’s what it’s all about. That’s why I do it.”

Brewers manager Craig Counsell said Murphy wouldn’t be on the bench Friday but would be before the end of the season. Murphy will remain with the Brewers for their seven-game road trip that starts Monday and concludes their regular season.

The Brewers were practicing infield defense at Miller Park on Aug. 1 when Murphy sat down and said he wasn’t feeling well. Trainer Rafael Freitas was nearby and escorted Murphy to the clubhouse, where he met with team physician, Dr. Mark Niedfeldt.

Niedfeldt diagnosed the situation and made sure Murphy was taken to a hospital. where the 61-year-old received a stent.

Murphy said he “kind of didn’t realize” the gravity of the situation as it was happening.

“Maybe I was just playing it off a little bit, but there’s no heart disease in my family,” Murphy said. “I’m a fairly healthy person. There’s no history of any complications. I guess I didn’t understand it until after, and I probably still don’t know the magnitude of what it could mean. I’ve just chosen to be grateful and to not worry about how close it was, live a little healthier.”

Murphy, who lives in Arizona, said he watched every Brewers game while recovering from home and often called Counsell and other staffers to discuss how the team was doing, among other things.

Various members of the Brewers organization also continually checked on him to make sure he was doing all right.

“They were just outstanding,” Murphy said. “It really makes you feel like this is a family.”

Murphy was hired as the Brewers’ bench coach in November 2015. Murphy posted a 42-54 record as the San Diego Padres’ interim manager in 2015 after Bud Black was fired.

Murphy led Arizona State to a runner-up finish in the 1998 College World Series.