Keselowski comes up short for playoffs, but not for veterans

America would not be the place it is without the people fighting on the front lines. Tim Van Vooren goes Beyond the Game with Brad Keselowski, who is showing his support to the men and women who have served this country.

Needing a win in the final race to qualify for his ninth straight NASCAR playoffs, he crashed after just 31 laps.

"Daytona is always a crazy race," said Keselowski. "And you feel like when you run there, if you can just survive, you've had a good day. And unfortunately, we weren't able to survive."

Keselowski is disappointed knowing how much effort his team put into this season, but it's not the end of the road.

"It's frustrating and not what we want, but we're building," Keselowski said. "And, you know, our success and failures are not dictated by one year."

Less than 24 hours after the wreck, it was all smiles for the 38-year-old.

Partnering with Kohler and the Fisher House Foundation, Keselowski quickly switched gears from racing to the military.

"I feel so blessed to get to be a race car driver and to get to do the things I get to do, have the life I have to live and have a family and all the blessings that come with it," said Keselowski. "And it's not lost on me and my family how those proceeds don't come just for free. Somebody had to sacrifice and put their lives on the line to protect our freedoms and to give us these opportunities." 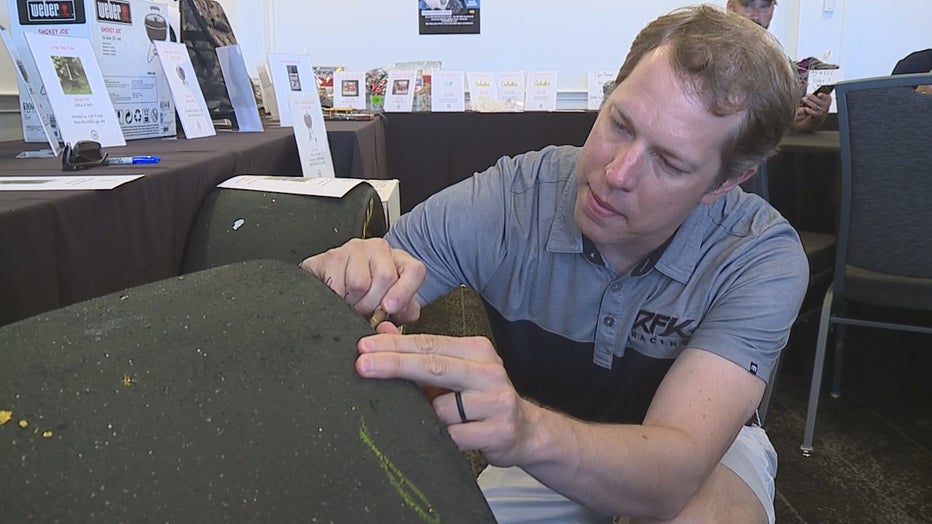 Fisher House's 10th annual golf outing at Geneva National brought in Keselowski to autograph memorabilia and raise money for an organization that takes care of veterans in need.

"I think it's got to mean the world to our veterans," said Fisher House Wisconsin's Board of Directors Secretary Carmen Anderson. "I mean, to have NASCAR here and Brad and, you know, a celebrity of his caliber, I think really demonstrates for them that he's got their back, and he supports our veterans and the commitment that they've made to this country and all the sacrifices that they've made."

One of those veterans, Jason Oglesby, who works for Kohler and is an Air Force vet, said he understands what it means to have support from someone like Keselowski.

"It means a lot," said Oglesby. "I mean, because you give back in so many different ways, and it's a humbling experience, no matter who you are, to come back and do something like this, especially after he got out of a race car about 24 hours ago, and to fly all the way from Florida back here to Wisconsin and show his support is just an amazing experience."

He says days like this are all about listening and appreciating our service men and women.

"I think a lot of veterans, and not just veterans, even active duty, just want to be recognized for the work they've put in and no different than anyone else in their lives, in their career," Keselowski said. "And they want to just want to be acknowledged and know that people care about them and respect them. And, you know, we try really hard to do that."