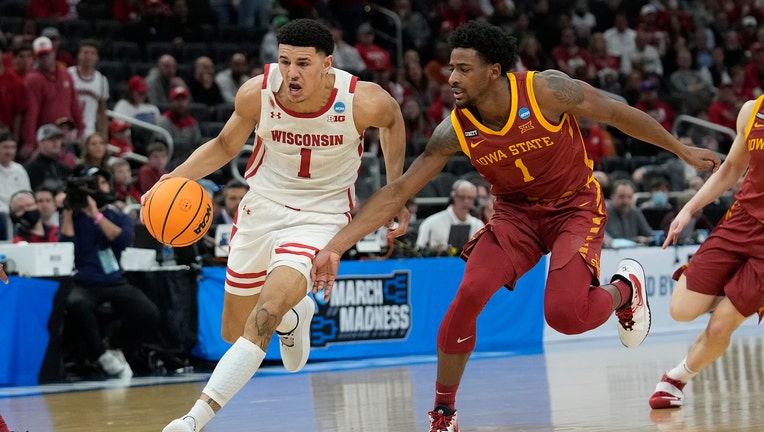 Johnny Davis of the Wisconsin Badgers dribbles the ball in front of Izaiah Brockington of the Iowa State Cyclones during the first half in the second round of the 2022 NCAA Men's Basketball Tournament at Fiserv Forum on March 20, 2022. (Photo by Patr

Davis announced Thursday that he’s entering the NBA draft and hiring an agent. The 6-foot-5 guard is regarded as a likely lottery selection and could be Wisconsin’s first top-10 overall pick since the Charlotte Hornets took Frank Kaminsky ninth overall in 2015.

"I can’t wait for what happens next," Davis said while making his announcement on ESPN’s "NBA Today."

Davis added that "after talking it over with my coaches and my family, they thought (entering the draft) was the best decision for me."

Davis is an Associated Press All-America first-team selection and the Big Ten player of the year. He is a finalist for the Naismith Trophy and Wooden Award, both given annually to the nation’s top player.

Davis also was one of the nation’s most improved players. After averaging 7 points, 4.1 rebounds and 24.4 minutes in a bench role as a freshman, he had 19.7 points and 8.2 rebounds per game this season while helping Wisconsin (25-8) win a share of the Big Ten regular-season title and earn a No. 3 seed in the NCAA Tournament.

Davis scored Wisconsin’s last 14 points and finished with 25 in a 67-60 first-round victory over Colgate before shooting 4 of 16 and recording 17 points in a 54-49 second-round loss to Iowa State.

"My time here at Wisconsin was great," Davis said. "It was an unforgettable experience. I thank all my coaches and my teammates that I had in my corner."

The Milwaukee Brewers are ushering in a new era of utility for digital sports collectibles -- with new NFTs.

Every college football player hopes to hear his name called at the NFL Draft. Lily Zhao goes Beyond the Game with one Plymouth grad who is trying to ensure that it happens.

Milwaukee Brewers players are used to routine when it comes to baseball, even in the offseason, but this past offseason was a very different animal. The owners and players union spent most of it trying to work out a new collective bargaining agreement.