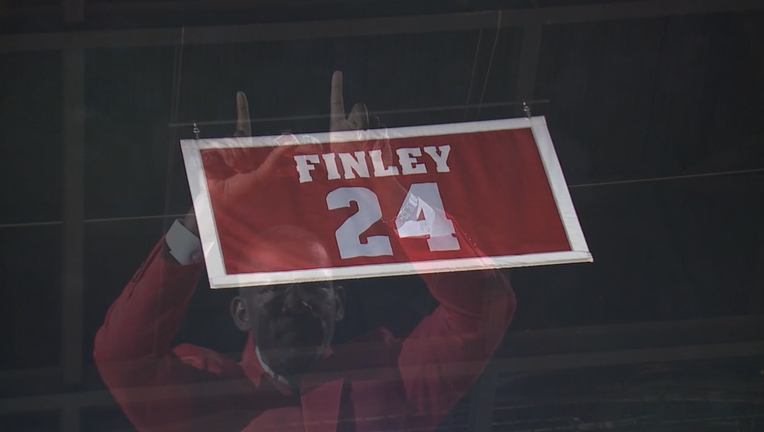 "This is a special day for myself, for my family," said Finley.

Long considered one of the best to wear a Badgers jersey, Finley returned to Madison for a special honor.

One that was long overdue.

"When I left here in '95, I didn't expect my number to be retired," Finley said. "It wasn't something that I came to the university as a goal. My main focus was to win as many basketball games as I could and put the Wisconsin basketball program on the map."

And that he did.

During halftime of Wisconsin's game against Michigan, Finley saw his name and jersey number 24 retired and raised into the Kohl Center rafters.

"It's about time," said Finley.

On hand to watch this special honor, Finley's family, friends and former teammates all witnessed the Badgers immortalize one of the players who coincided with the rebirth of their men's basketball program.

"A great day to honor one of the guys in the history of this program that has made basketball cool at Wisconsin," said UW head coach Greg Gard. "Basketball wasn't cool before Michael Finley and his teammates and others got here. Now, there's a lot of people who put a lot of blood, sweat and tears into this program and Michael's obviously one of the all-time greats.".

Before Finley walked into the University of Wisconsin Field House in 1991, the Badgers had been in a lengthy NCAA tournament drought.

But his play changed everything.

Finley was the first Badger to score 2,000 points and helped lead Wisconsin to the 1994 NCAA tournament. It was the program's first appearance in 47 years.

From there, the two-time All-Big Ten selection was taken in the first round by the Phoenix Suns and went on to have a 15-year career in the NBA.

"To look back at the basketball program and the university and see the successes that they had, knowing that I was a part of one of the original teams to break that barrier of getting back into the tournament, and making it a consistent thing, like you said an annual thing, so it gives me great pride," Finley said.

It was his contributions to the Badgers in the early '90s that helped Bucky become the perennial tournament contender it is today.

"To see where the program has come from, I mean, just walking into this arena," Finley said. "I played in the Field House. I played in a condominium. This is a mansion."

Standing on the court on this special day 27 years later, Finley had one final thank you.

"Badger nation has always been there for me," said Finley. "I love you guys and all of Wisconsin."