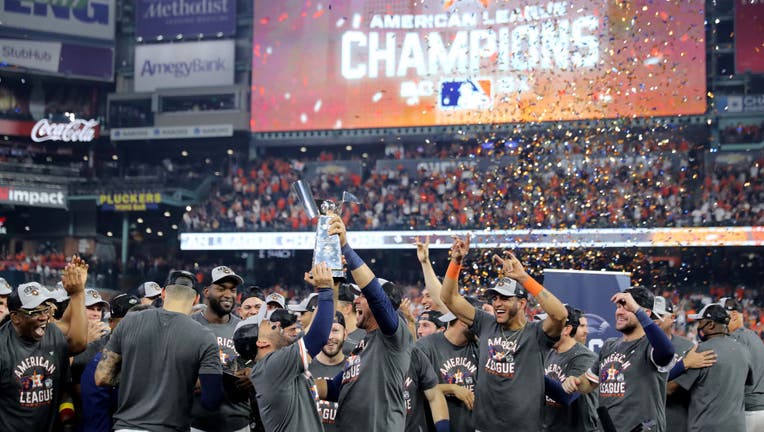 HOUSTON, TEXAS - OCTOBER 22: The Houston Astros celebrate after defeating the Boston Red Sox 5-0 in Game Six of the American League Championship Series to advance to the World Series at Minute Maid Park on October 22, 2021 in Houston, Texas. (Photo b

HOUSTON - The Houston Astros are headed to the World Series after defeating the Boston Red Sox in Game 6 of the American League Championship Series at Minute Maid Park on Friday night.

The final score was 5-0 as Houston wins the overall series 4-2.

The storing started in the bottom of the first inning when Yordan Alvarez hit a fly ball to the track near the fence and wasn’t caught by the Red Sox outfielder. That play scored Alex Bregman who was already on base.

Then it was a pitchers’ duel as Astros pitcher Luis Garcia pitched 5 2/3 innings as he gave up only one hit, one walk and struck out seven hitters.

In the bottom of the sixth inning, Alvarez hit a line drive triple into the right-field corner and scored at home plate on the next at-bat as a double play occurred at first base.

The Astros faced a scare in the top of the seventh inning, but a Red Sox batter struck out at the plate and Martin Maldonado threw out a runner at attempting to steal second base to end the inning.

In the bottom of the eighth, with two on, Houston Astros' Justin Tucker hits a 3-run home run into left field, extending the Astros lead 5-0.

The Astros sealed the game in the top of the 9th and are headed to the World Series.

The Astros will face either the Los Angeles Dodgers or the Atlanta Braves in the World Series. The Braves currently lead the NLCS series 3-2.

Coverage will begin on Tuesday with our one-hour Swing for the Ring Special starting at 5:30 p.m. First pitch will be after 7 p.m. only on FOX.