BOSTON -- Giannis Antetokounmpo had 32 points and 13 rebounds, George Hill finished with 21 points and the Milwaukee Bucks beat the Boston Celtics 123-116 on Friday night to take a 2-1 lead in the Eastern Conference semifinal series. 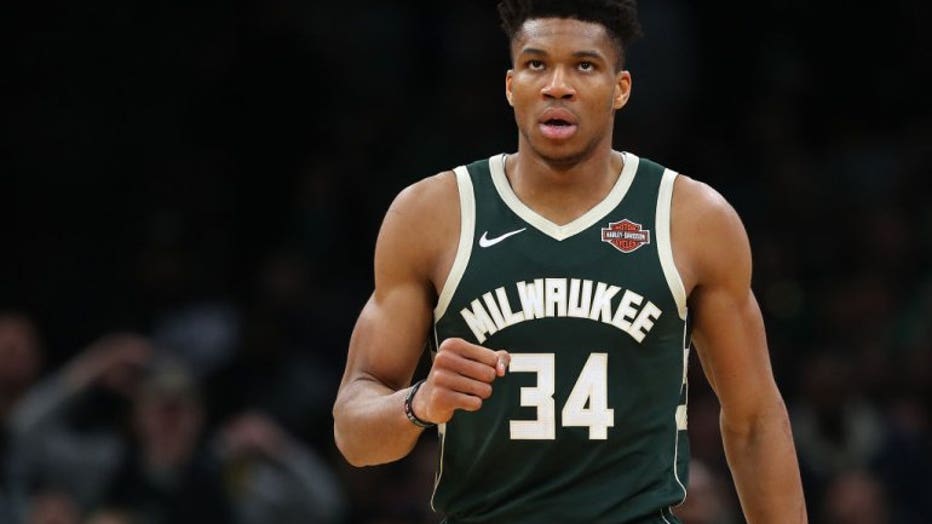 BOSTON, MASSACHUSETTS - MAY 03: Giannis Antetokounmpo #34 of the Milwaukee Bucks celebrates during the second half of Game 3 against the Boston Celtics during the Eastern Conference Semifinals of the 2019 NBA Playoffs at TD Garden on May 03, 2019 in

Antetokounmpo had only 13 field goal attempts but had 16 points from the free throw line. Including Milwaukee's two regular-season games in Boston, he has scored 30 or more points in each of his trips to TD Garden in 2018-19.

Kyrie Irving scored 29 points and Jayson Tatum had 20 for the Celtics, who host Game 4 on Monday.

Boston led by a point at the half but was outscored 40-31 in the third quarter and trailed by as many as 17 points in the final period.

The Celtics were outscored 52-24 in the paint and had 18 turnovers leading to 28 Milwaukee points.

The Bucks threw the Celtics a tactical curveball in Game 2, inserting Nikola Mirotic into the starting lineup in place of Sterling Brown.

In Game 3 it was Celtics coach Brad Stevens who brought new wrinkles, notably going with a small lineup that featured 6-foot-7 Semi Ojeleye guarding the 6-11 Antetokounmpo when he returned to the game at the start of the second quarter and again in the third quarter.

Boston also kept attacking Antetokounmpo throughout the game when it had the ball. It included a one-handed dunk by Jaylen Brown over the Bucks' star early in the third quarter that brought the Celtics fans inside TD Garden to their feet. It was reminiscent of a two-handed dunk he had over Antetokounmpo in Boston's Game 1 win.

Still, Milwaukee managed to keep racking up points in the paint. The Bucks led by as many as 12 in the third quarter and took a 95-87 lead into the fourth.

That was the score when Brown was called for his fifth foul with 10:53 left on what appeared to be a light touch of Eric Bledsoe near the baseline. It brought animated protests from both Brown and Stevens. A few trips later, Tatum received a technical for protesting his foul of Antetokounmpo.

The Bucks started to rack up points at the line and their lead grew to 114-97 by the time Brown came back into the game with 4:53 remaining. 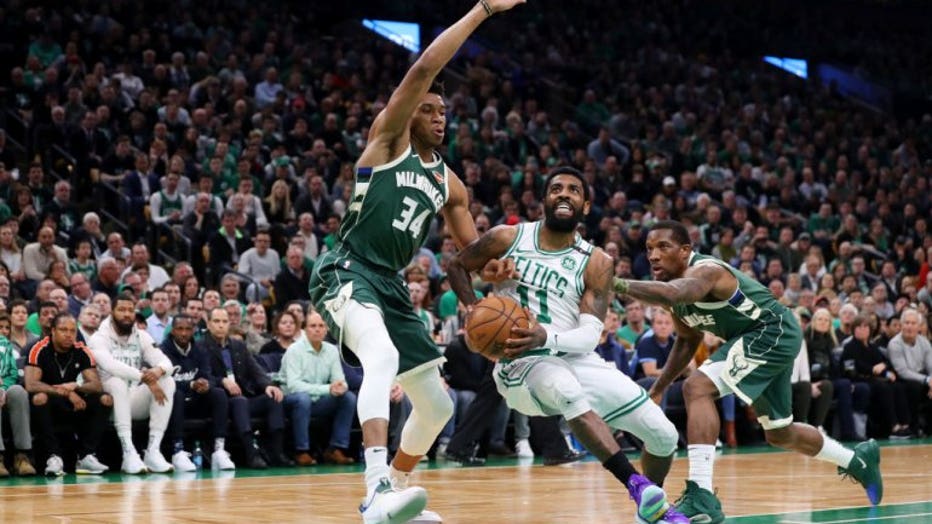 BOSTON, MASSACHUSETTS - MAY 03: Kyrie Irving #11 of the Boston Celtics drives to the basket between Giannis Antetokounmpo #34 and Eric Bledsoe #6 of the Milwaukee Bucks during the first quarter of Game 3 of the Eastern Conference Semifinals of the 20

Celtics: Finished 30 of 32 from the free throw line

The Celtics players wore black warmup T-shirts adorned with a green No. 17 to honor Hall of Famer John Havlicek, who died last week at age 79 after a short battle with Parkinson's disease.

The team also observed a moment of silence for him prior to tipoff. Later after the game's first timeout, a highlight video was shown on the jumbotron. It ended with a spotlight being shined on his retired No. 17 banner hanging in the rafters.

Voted one of the NBA's 50 greatest players, Havlicek won eight titles with Boston and his steal of Hal Greer's inbounds pass helped the Celtics hold off Philadelphia in the 1965 Eastern Conference final.

Game 4 is Monday night in Boston.