MILWAUKEE - Connor Ingram is the last line of defense for the Milwaukee Admirals.

"You're either the hero or the goat a lot of the times, so it’s a position that there's no mistakes," said Connor Ingram, Milwaukee Admirals goalie.

As a goalie, it’s Ingram’s job to stop the pucks coming his way on the ice, and he does it well. However, the one thing the 25-year-old couldn’t quite stop was his mind, which took him to some pretty dark places.

"I wasn't going to survive is what it was," said Ingram. "I was in a bad place for sure."

At the height of the COVID-19 pandemic, isolation and a repetitive routine took a toll on Ingram’s mental health.

"I spent probably eight out of 12 months by myself in a hotel room that year," said Ingram. "It wasn't a life. It was just go to the rink, come home, worry, go to bed, start it over the next day." 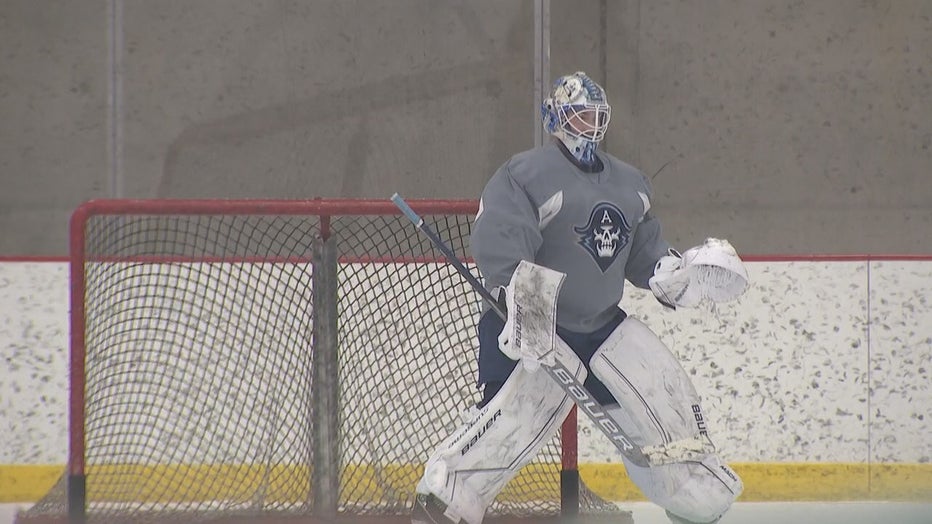 Ingram was eventually diagnosed with obsessive-compulsive disorder or OCD, an anxiety disorder which features a pattern of unwanted thoughts or fears that can lead to repetitive behaviors.

"I didn't know I had it," said Ingram. "When I asked for help, I thought I had a problem with alcohol is what it was. For my OCD, a really big thing is completion, so if I started with one, and I had a six-pack, I had to get through my six-pack before I could stop, kind of thing. So, I thought I had a problem with alcohol, but I wasn't a guy who drank every day or needed a drink to set myself straight or anything like that, so when I got there, and they explained that to me, they said you don't have a problem with alcohol, this is just how you are. For me, when it's something that was explained to me what OCD was, it was kind of eye-opening."

"They call it a contamination fear, trigger, whatever it was," said Ingram. "One that I read was syphilis will give you a rash on your hands and your feet, so I would check my hands and my feet probably once an hour. When you think OCD, that's not what you think."

Ingram was never sure why his mind took him in the direction it did because he was worrying about things that he had no need to worry about, but soon those obsessions were taking over his life.

"I would come to the rink, and I would go on the ice for an hour and a half, and I couldn't do those things," said Ingram. "I would start to physically shake."

"I went to the rink, and I tried to retire is what I did," said Ingram. "I went into our goalie coach and sat down and said I can't do this anymore. He said no, there's something bigger here. Let's get you some help. That was the day I took a little trip."

"I did a lot of therapy and exposure therapy," said Ingram. "It took kind of sitting down in a room with a stranger and nothing to lose to kind of open up and say this is what I deal with every day. For them to say hey, this is normal, that probably saved my life."

Throughout his treatment, Ingram received an endless amount of support, which made his return to the game that much sweeter.

"To step on the ice with a clear mind was the first time in years for me," said Ingram.

And now, he’s taking charge as a mental health advocate in the sport he loves.

"I think that's why I wanted to help is, I had no idea what OCD was," said Ingram. "It's something we don't talk about; we don't learn about. I just hope that maybe someday, somebody will read something or watch this and say hey, maybe I need help too you know."

To this day, the compulsions are still there, but Ingram has learned how to cope.

Asking for help can be the hardest step to take, but Ingram’s leap of faith turned out to be the biggest save he’s ever made in his life.

"My mom always says that my eyes look like I'm alive again," said Ingram. "It's been a long journey. It hasn't been easy, but it's been the best for me for sure."

For any players who may need help, contact the NHLPA.

Officials at Waukesha North High School have launched an investigation after several students got sick after Prom.