How concerned are you?

With Aaron Rodgers going down with a shoulder injury, how concerned are you about him and the rest of the season?

MINNEAPOLIS — Aaron Rodgers has engineered many a last-minute comeback for the Green Bay Packers. He has a dozen victories over the rival Minnesota Vikings in 10 years as the starter.

This time? No chance. Rodgers was long gone, and so was Green Bay's division lead.

Harrison Smith led the Minnesota defense's thorough dismantling of the Packers, who lost Rodgers to a broken collarbone and left with a 23-10 defeat to the Vikings on Sunday that transformed the trajectory of the NFC North race.

Smith had 1½ sacks on safety blitzes, a diving interception and two pass breakups, helping the Vikings (4-2) limit the injury-depleted Packers to a season-low 227 yards.

"I don't think we altered a whole lot," Smith said. "We had a game plan, and we pretty much stuck to it."

Anthony Barr, who later left with a concussion, delivered the game-changing hit on Green Bay's second drive when he took Rodgers hard to the turf as the two-time NFL MVP followed through on a pass. Rodgers fell on his throwing shoulder, and the Packers (4-2) announced he could miss the remainder of the season .

"I'm not into the soothsaying stuff," Vikings coach Mike Zimmer said, when asked if he thought the momentum in the division had shifted toward his team. "Obviously he's a great player. It's different when he's not in there. There's no doubt about it. But that's just the way it is." 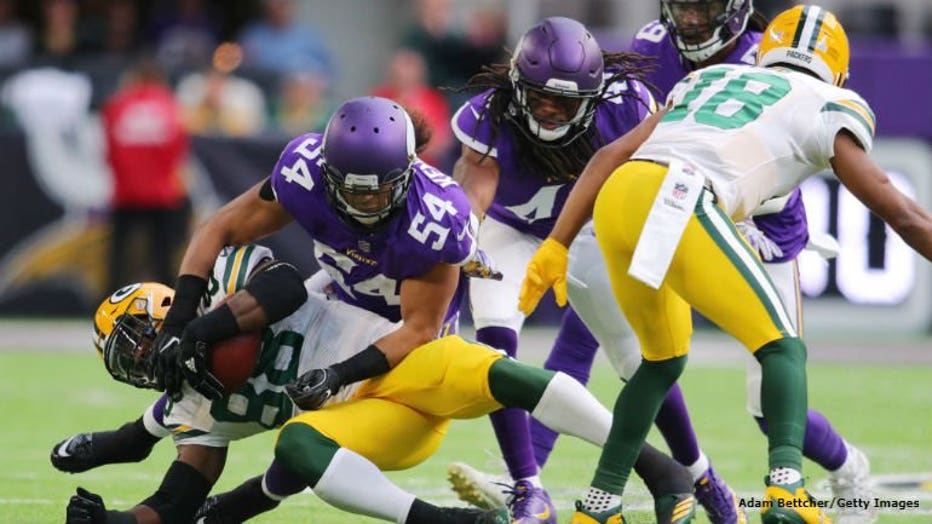 MINNEAPOLIS, MN - OCTOBER 15: Ty Montgomery #88 of the Green Bay Packers is tackled by Eric Kendricks #54 of the Minnesota Vikings during the fourth quarter of the game on October 15, 2017 at US Bank Stadium in Minneapolis, Minnesota. (Photo by Adam

Brett Hundley threw his first career touchdown pass in relief, connecting with Davante Adams in the second quarter after a 63-yard return by Clay Matthews of Jerick McKinnon's fumble gave the Packers the ball at the 18.

Damarious Randall's interception of Case Keenum later in the first half put the Packers at the Minnesota 38 with a prime opportunity to tie the game at the break, but a juggling catch by Ty Montgomery at the goal line was ruled incomplete by replay review reversal that forced a short field goal instead and kept the Vikings in front 14-10.

The Packers had five first downs and 102 yards over the first three quarters.

"That was a hard day," Packers coach Mike McCarthy said. "All the players that we lost to injury, it was difficult. We all understand the magnitude of what Aaron means to our football team." 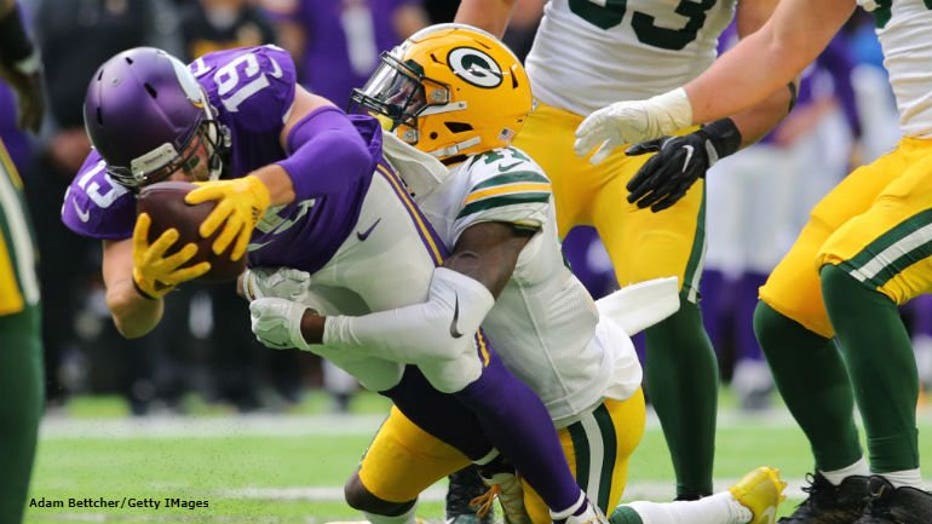 MINNEAPOLIS, MN - OCTOBER 15: Adam Thielen #19 of the Minnesota Vikings reaches for a first down while being tackled by Lenzy Pipkins #41 of the Green Bay Packers during the third quarter of the game on October 15, 2017 at US Bank Stadium in Minneapo

The Vikings have won three of their past four games against the Packers after a lopsided five-year stretch against their biggest rival fueled mostly by the mastery of Rodgers. Now the Packers must move forward with Hundley, who has 44 attempts in three NFL seasons.

"We've been put through a lot of tests in the past," Adams said. "So just bounce back, figure it out and rally. We've got a lot of faith in Brett."

Hundley was picked off three times and sacked four times. He finished 18 for 33 for 157 yards.

"I love Aaron to death. I let him know I love him and I've got him," Hundley said, "and we'll go from here." 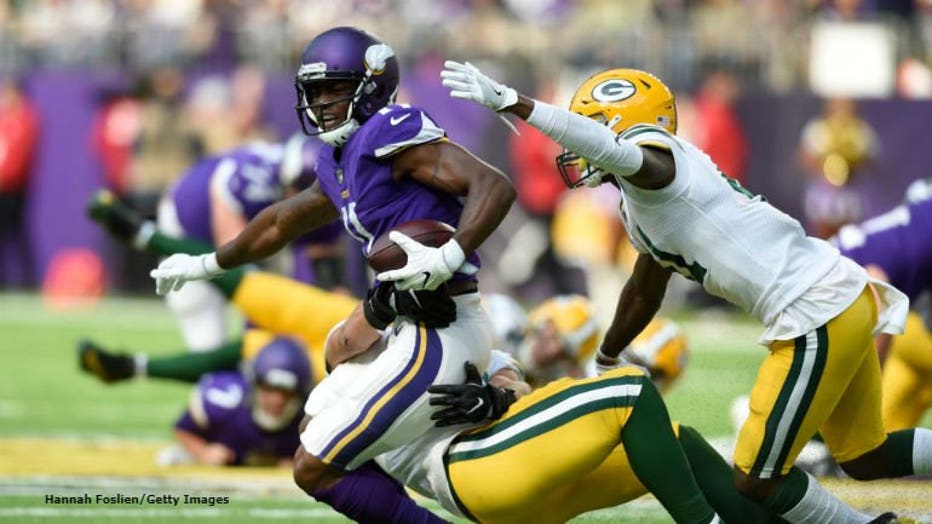 MINNEAPOLIS, MN - OCTOBER 15: Laquon Treadwell #11 of the Minnesota Vikings is wrapped up by the Green Bay Packers during the third quarter of the game on October 15, 2017 at US Bank Stadium in Minneapolis, Minnesota. (Photo by Hannah Foslien/Getty I

McKinnon made up for his turnover with 16 carries for 69 yards and a score and five catches for 30 yards and a touchdown for the Vikings, who have so far survived the absence of Bradford and running back Dalvin Cook, who's out for the season with a knee injury.

Keenum, making his fourth start in place of Sam Bradford, went 24 for 38 for 239 yards without top wide receiver Stefon Diggs. He threw 13 times to Adam Thielen, completing nine for 97 yards.

"There's no drop-off," McKinnon said, "and I think we're confident in whoever steps up at any position." 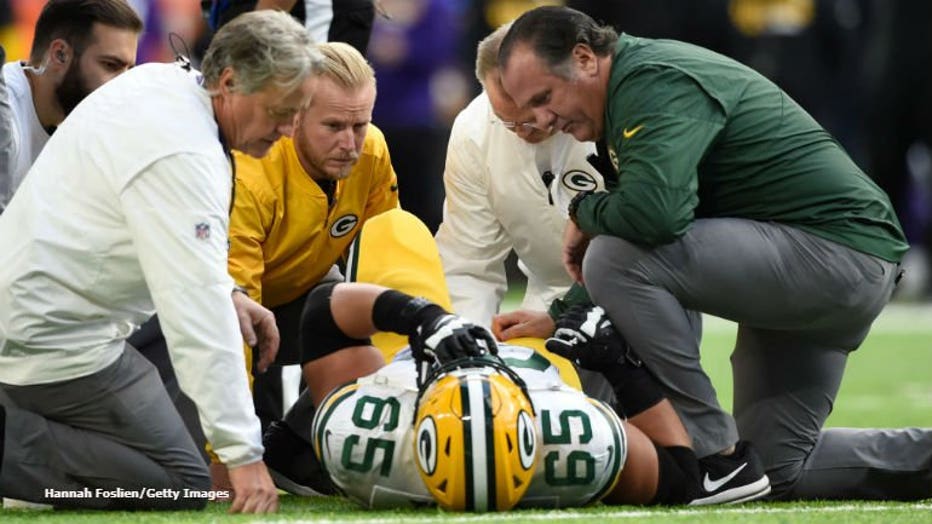 MINNEAPOLIS, MN - OCTOBER 15: Lane Taylor #65 of the Green Bay Packers lays on the field after being injured during the second quarter of the game against the Minnesota Vikings on October 15, 2017 at US Bank Stadium in Minneapolis, Minnesota. (Photo

Since Brett Favre took over for the injured Don Majkowski in the third game of the 1992 season, the Packers have had Favre or Rodgers for all but nine games.

Matt Flynn, Scott Tolzien and Seneca Wallace were forced to fill in while Rodgers missed seven games in 2013 because of a broken collarbone. Flynn started once in 2010 when Rodgers sat out with a concussion and again in 2011 when he rested during the regular-season finale with the Packers having clinched the top seed in the NFC playoffs.

Packers: With three starting DBs already out with injuries (Morgan Burnett, Davon House and Kevin King), backup CB Quinten Rollins (ankle) was also lost during the game. For the first time this season, the starting offensive line was intact. That lasted about half of the game. RT Bryan Bulaga (concussion) was knocked out of action, and LT David Bakhtiari's hamstring injury flared up. He missed the past four games.

The Packers host New Orleans, before a well-timed bye week.

The Vikings play Baltimore at home, then travel to London to play Cleveland.