DETROIT -- Mason Crosby kicked a 33-yard field goal as time expired, lifting the Green Bay Packers to a 23-20 win over the Detroit Lions to earn a first-round bye.

The Packers (13-3) fell behind by two touchdowns in the second quarter. They didn't lead until Crosby made his second game-winning kick against Detroit this season.

Green Bay won despite Aaron Rodgers struggling to make accurate throws for much of the afternoon. Rodgers was 27 of 55 for 323 yards with two touchdowns and an interception. He made a short pass under pressure to Aaron Jones, who turned the clutch throw into a 31-yard reception to set up Crosby's kick.

Jones ran for 100 yards on 25 carries and had 43 yards receiving. Davante Adams had seven receptions for 93 yards and a score.

David Blough was 12 of 29 for 122 yards — and a 19-yard touchdown reception — filling in again for Matthew Stafford, who had a season-ending back injury.

Despite playing only for pride, the Lions looked as if they were more motivated to win early in the game.

And with nothing to lose, they scored on a trick play midway through the first quarter. Blough handed off to receiver Danny Amendola, who threw back across the field to the rookie quarterback for a TD.

Kerryon Johnson converted a fourth down with a 1-yard TD run late in the first half, giving Detroit a 14-0 that stunned everyone not on their sideline.

Crosby and Matt Prater made field goals over the last 20 seconds of the first half, leaving the Lions with a 17-3 lead.

Rodgers started to make more accurate passes in the second half such as 20-yard TD pass to Adams and a 28-yard pass to Allen Lazard with 5:19 left for another score that helped the Packers pull into a 20-all tie. 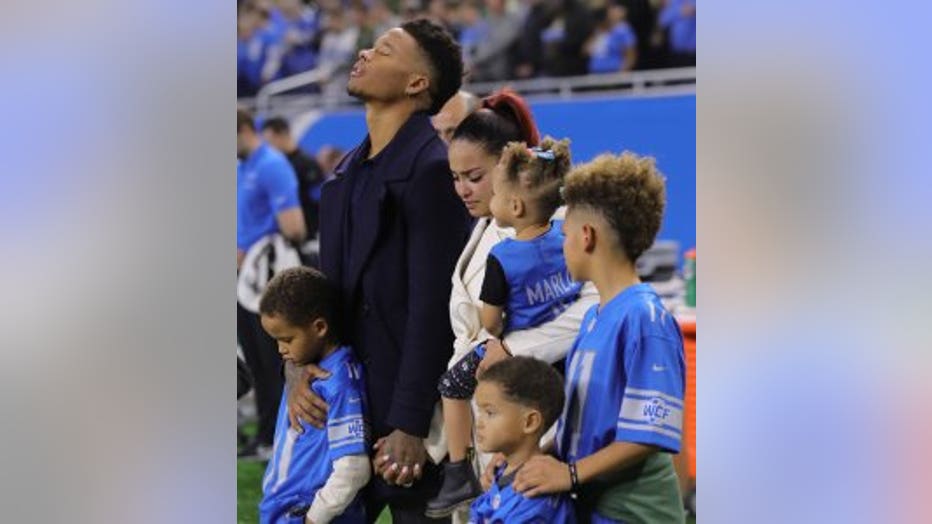 DETROIT, MI - DECEMBER 29: Marvin Jones #11 of the Detroit Lions and his family stand on the sidelines during a moment of silence for the passing of their young son, prior to the start of the game against the Green Bay Packers at Ford Field on Decemb

There was a long moment of silence before the game for receiver Marvin Jones' 6-month old son, who recently died. Jones, who was on the sideline with his family during the national anthem, went on injured reserve earlier this month.

Lions: WR Kenny Golladay didn't return after being evaluated for a concussion following a 42-yard catch in the second quarter. LB Devon Kennard and TE Isaac Nauta each left the game with hamstring injuries. LT Rick Wagner (knee) was inactive.

Packers: Playing in the postseason for the first time since 2016, Green Bay will have at least a bye.

Lions: The franchise decided earlier this month general manager Bob Quinn and coach Matt Patricia will get another season to lead the team, answering what was the biggest question for the offseason.