WIMBLEDON, England — It was easy to forget that Coco Gauff is still just 15 as she stood on the grass of Centre Court, pounding her chest and shouting, "Let's go! Come on!" to celebrate a 32-stroke point that forced a third set in her match Friday evening at Wimbledon.

Up in the stands, Mom rose to pump a fist and yell, "Yes!" Thousands of spectators jumped out of their seats, too, roaring. By then, Gauff already twice had been a point from losing in the third round to Polona Hercog of Slovenia.

Most players, no matter the age, would not be able to find a path past that kind of a deficit on this imposing a stage, would not be able to handle that sort of stress and figure out a way. Gauff is, quite clearly, not most players. That much has been established. How far can she go, both this fortnight and in the future? The tennis world is watching, waiting to learn the answers. 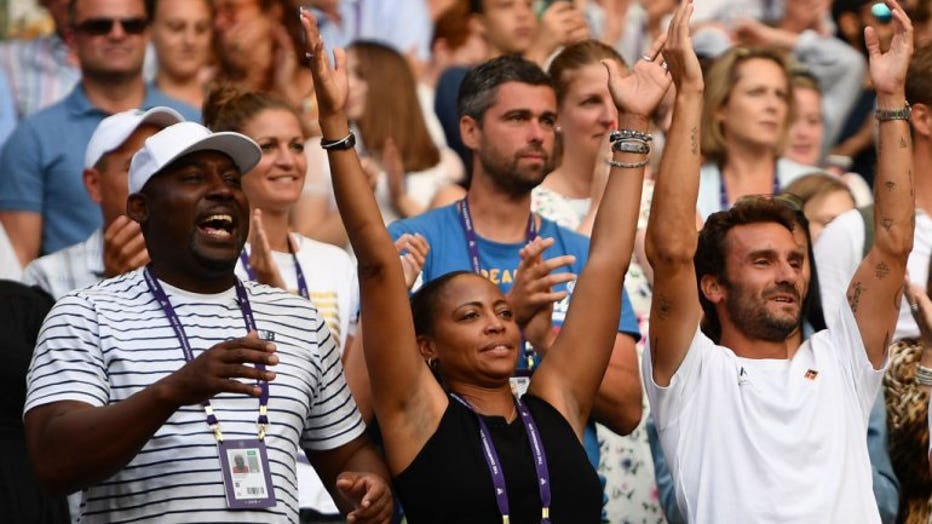 The team of US player Cori Gauff, including her father Corey (L), mother Candi (C) and French tennis coach Jean-Christophe Faurel (R) celebrate after Gauff beat Slovenia's Polona Hercog during their women's singles third round match on the fifth day

That Gauff, ranked 313th and facing another unseeded player, was scheduled to appear at Wimbledon's main stadium says plenty about what a sensation the Floridian already is. That she won this one, and how she did so — erasing a pair of match points and coming back to beat Hercog 3-6, 7-6 (7), 7-5 — offer some insight into what Gauff might become.

"Obviously, this moment is an incredible moment," Gauff said. "I'm still excited I get to keep living it."

As it is, she was the youngest player to qualify for Wimbledon in the professional era, winning three matches last week against higher-ranked women in the preliminary rounds. 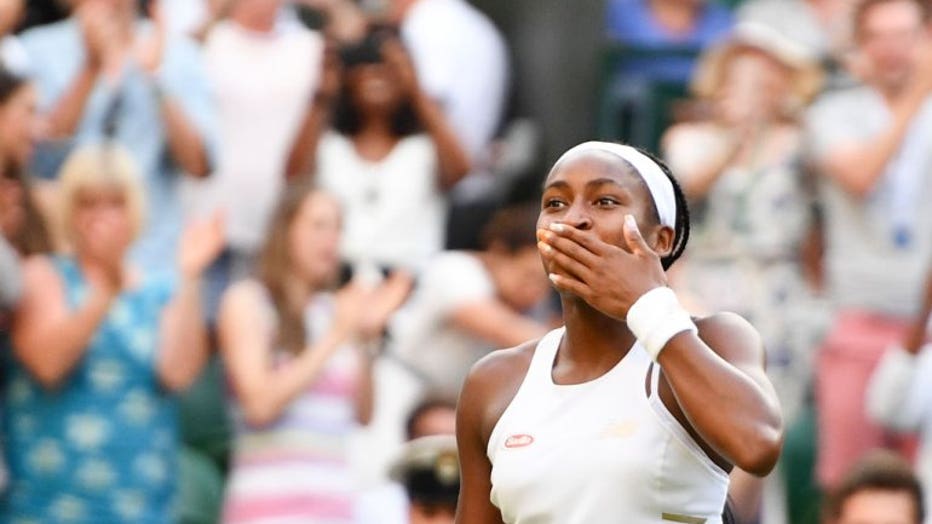 US player Cori Gauff celebrates beating Slovenia's Polona Hercog during their women's singles third round match on the fifth day of the 2019 Wimbledon Championships at The All England Lawn Tennis Club in Wimbledon, southwest London, on July 5, 2019.

Then, by upsetting five-time champion Venus Williams, who is 39, in the first round of the main event, Gauff became the youngest woman to win a match at the All England Club since 1991, when Jennifer Capriati reached the semifinals at 15.

That was followed by a win against 2017 Wimbledon semifinalist Magdalena Rybarikova, who is 30, before getting past Hercog, 28. When a reporter wanted to know how Gauff might spend the prize money she's already earned of about 175,000 pounds ($220,000), she replied: "I mean, I can't buy a car, because I can't drive."

That made her giggle, as did some of the other things she said at her news conference through a permanent smile, including her unprompted opening line about Jayden Smith's new album, her plea for tickets to a Beyonce concert and poking fun at her mother, Candi, for the way she waved her arms overhead when Friday's victory was over.

"Please tell me she's a meme," Gauff said. "I'm so excited to go on Instagram."

Next up: A fourth-round matchup against 2018 French Open champion and former No. 1 Simona Halep, who eliminated two-time major champ Victoria Azarenka 6-3, 6-1.

Other women's contests Monday will be No. 3 seed Karolina Pliskova against Karolina Muchova, No. 8 Elina Svitolina against No. 24 Petra Martic, and Dayana Yastremska against Zhang Shuai, who defeated former No. 1 Caroline Wozniacki 6-4, 6-2.

The top half of the men's draw, meanwhile, saw more in its series of upsets, leaving defending champion Novak Djokovic with what seems like little resistance in his road to the final. The No. 1 seed got a brief test Friday before quickly righting himself and getting past Hubert Hurkacz 7-5, 6-7 (5), 6-1, 6-4. No one else on that side of the bracket is ranked higher than 17th; that's the spot held by Milos Raonic, who is also the only other player who ever has been to a Grand Slam final.

No. 10 Karen Khachanov, No. 11 Daniil Medvedev and No. 19 Felix Auger-Aliassime all lost.

"It's impossible to say who is going to figure things out more than the others to do what it takes to win Slams," Anderson said.

That could be said of Gauff, of course, but she sure is looking like someone who can go far in the coming years.

She has a big serve, dialing it up to 118 mph on Friday — only Hercog and Serena Williams have hit one faster this week — and good groundstrokes off both wings, along with some touch and guile. And what she possesses, above all, is some real calm amid a storm.

As Hercog perfectly put it: "She's probably older in her head than the numbers show."

Hercog, who is ranked 60th, and is now 0-4 in third-round matches at majors, used a seven-game run to grab the opening set, the first dropped by Gauff in qualifying or the main draw, and then go up 5-2 in the second.

With Gauff serving at 30-40, Hercog was a point from victory. But the teen conjured up a backhand slice winner that dropped right on the chalk — a shot she only recently added to her repertoire.

After Gauff's aggressive style paid off there, it was Hercog who really went into a shell, playing so cautiously and making mistake after mistake. A big one came when Hercog served for the match at 5-3 and held her second match point: She double-faulted.

Eventually they headed to a tiebreaker, Gauff's first at a tour-level event.

"We've been working on her poise all year," Gauff's father, Corey, said earlier in the week. "After that comes together, then you really can improve your game, because when you're poised, you're not that emotional. You can troubleshoot."