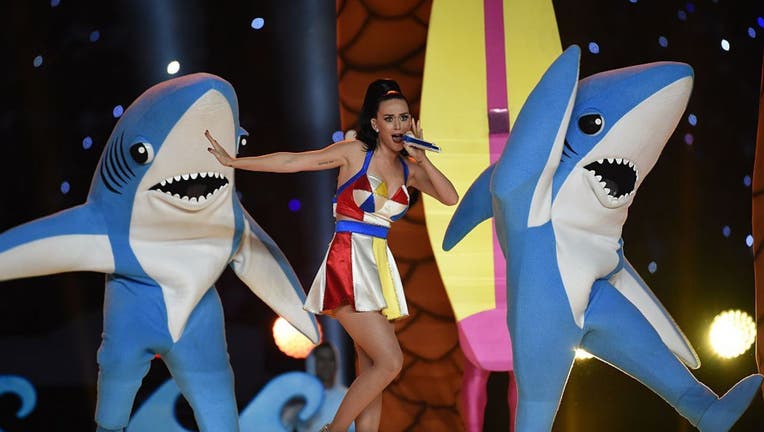 Singer Katy Perry performs during the New England Patriots and the Seattle Seahawks Super Bowl XLIX halftime on February 1, 2015 at the at University of Phoenix Stadium in Glendale, Arizona. (TIMOTHY A. CLARY/AFP via Getty Images)

You can’t talk about Super Bowl halftime shows without talking about the one that made the phrase “wardrobe malfunction” part of the national lexicon. While most people only remember that infamous moment, the entire show was entertaining. Jackson was in the middle of a comeback, and Timberlake was at the beginning of his solo career, making the awkward ending all the more unfortunate.

With an entrance fitting for the queen of pop music, Madonna’s 2012 Super Bowl performance was one for the books. Madonna used the occasion to kick off her MDNA tour, and the star managed to rouse the crowd with new songs and old favorites alike, with a spectacular rendition of “Vogue” and “Like a Prayer.”

Sure, Left Shark and Missy Elliot stole the show, but Katy Perry’s 2015 halftime performance was a primer in how to make a performance wonderfully weird. Plus, who can forget the moment Perry closed out her show soaring through the stadium on a shooting star platform?

Let’s be honest: Did anyone even remember that Coldplay was the headliner for this show? In all seriousness though, when Mars took the stage with crowd pleaser “Uptown Funk,” the show got interesting. Beyonce emerged from the sideline, leading her dancers through “Formation” before joining Mars onstage for a dance-off set to a mashup of “Uptown Funk” and “Crazy in Love.” The performance also featured a tribute to past halftime shows.

Channeling the legendary James Brown, along with some moves that seemed like an homage to Michael Jackson, Mars’ performance was one of the best in recent years. The only sore spot was that the Red Hot Chili Peppers clearly weren’t playing live when it was their turn on stage, but it’s not like they were the first band to deliver a pre-recorded performance at the big game.

This halftime show was packed with more star power than any other halftime show in Super Bowl history. The show opened with *NSYNC’s inescapable hit, “Bye, Bye, Bye,” and the boy band traded songs with Steven Tyler and company until they were joined on stage by Britney Spears, Mary J. Blige and Nelly for a star-studded rendition of “Walk This Way.”

A half-time show that started on the roof and ended with a mic drop? Oh yeah, you know it’s gotta be good. The super star literally went “over the top” when she literally jumped off the roof of NRG Stadium to start the show. She then progressed through all her hits, with the show getting bigger and bigger. And unlike several of the past Super Bowl shows, she didn’t need a surprise cameo.

Prince playing “Purple Rain” in the middle of a downpour? Enough said.

Some bands are perfect for stadium concerts, and U2 is no different. The Irish rockers earned their place in Super Bowl halftime show fame with their performance honoring the lives lost on Sept. 11, 2001. As they played “Where the Streets Have No Name,” the names of those who died that tragic day scrolled on a screen behind them, making it one of the most powerful moments in Super Bowl halftime history. (Warning: You’ll need some tissues to get through this one.)

This was the performance that changed Super Bowl halftime shows forever. Jackson’s spectacular entrance used body doubles to create the illusion of teleporting around the stadium on top of the Jumbotrons before the King of Pop himself jumped from the center of the stage. The audience waited with baited breath as Jackson held still for more than a minute and a half before opening the show with “Jam,” and continuing on with crowd favorite “Billie Jean.” Jackson closed out his performance with dedicating “Heal the World” to children around the globe.