NEW ORLEANS (WGNO) –  A woman was struck and killed by a double-decker Mardi Gras parade float in New Orleans on Wednesday night, a city spokesperson confirmed.

Spokesperson Latonya Norton said the incident happened during the Nyx parade. The New Orleans Police Department stopped the parade after responding to the incident, which happened around 9 p.m. after about half of the floats had passed the area.

NOPD Superintendent Shaun Ferguson, speaking to reporters, described the victim only as an “adult female.” Ferguson said he did not know the woman’s identity or any details related to the woman’s death.

During Carnival season, paradegoers are reminded not to step into the street while the floats are rolling. Parents are told to keep their children from darting toward the floats to catch parade throws.

Ferguson said the NOPD allowed bands in the parade to march around the float involved, but all the floats behind it and their riders remained stopped on the route until investigators allowed the floats to leave.

“Given the circumstances, I’m sure you would agree that making the decision to stop the parade at Float 22 was the proper thing to do,” said Mayor LaToya Cantrell.

“On such a joyous night, this is obviously a tragic occurrence. The parade takes a back seat when something like this happens on the route. On behalf of the entire Krewe of Nyx, along with the city of New Orleans, we offer our most sincere condolences to the family and friends of the individual involved.” 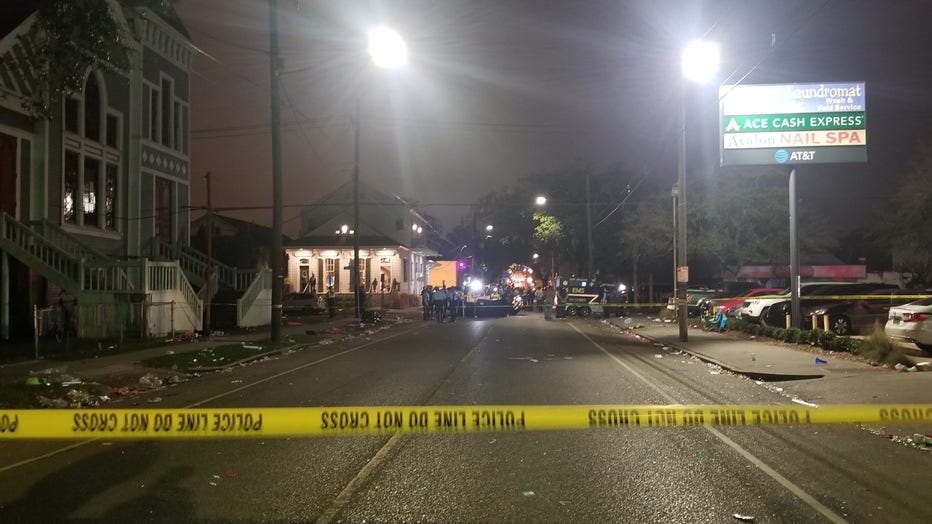 Beads and other parade throws remained at the scene after a woman was struck by a float and killed.