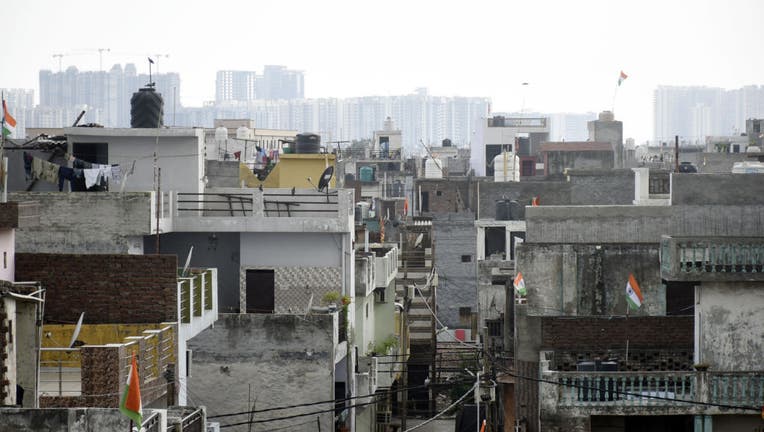 FILE - Indian national flags are seen on rooftops in the city of Ghaziabad, also located in the Indian state of Uttar Pradesh, on Aug. 18, 2022. (Photo by Sakib Ali/Hindustan Times via Getty Images)

A mother in India is accused of cutting off her boyfriend’s genitals after he allegedly tried to rape her 14-year-old daughter, according to local reporting.

The incident was reported on Wednesday in Uttar Pradesh, a state in northern India near the border with Nepal. The 36-year-old woman, who was not named in the reporting, told the Times of India that she had been working on a farm and came home to find her 32-year-old, live-in boyfriend attacking her teenage daughter.

The woman had been living with him for the past two years after separating from her "alcoholic husband," according to the report.

"I was working in the farm when the incident took place," the mother was quoted as saying by the Times of India. "Fortunately I returned home in the nick of time and caught him red-handed."

The panicked mother tried to save her daughter, and the boyfriend then allegedly attacked her, the report said.

"So I brought a knife from the kitchen and chopped off his private parts to teach him a lesson. I have no regrets for what I did," the mother told the Times of India.

An officer with the Lakhimpur police station told the news outlet that the boyfriend was booked for rape under a child sexual abuse law in India, called the Protection of Children Against Sexual Offences (POCSO) Act.

The man was reported as being in critical condition and hospitalized for treatment.

It was unclear if the mom faces charges.

The directive was part of a long-awaited manual regarding in-house investigations into allegations of priests who rape and molest minors and vulnerable adults, according to the Associated Press.

India has passed stricter rape laws in recent years in response to violent crimes against women and girls. The 2012 fatal gang rape of a young woman in New Delhi triggered massive protests by hundreds of thousands to demand stricter laws and punishment.

The POCSO Act, which aims to protect children from sexual assault, sexual harassment, and pornography, was passed that same year.

The 2018 rape and killing of an 8-year-old girl in India’s Jammu-Kashmir state and the alleged rape of a girl by a ruling party lawmaker in Uttar Pradesh state — the same state where the recent alleged incident occurred — triggered the government to approve of the death penalty for people convicted of raping children under 12.