HOUSTON — A witness says the driver of a pickup truck that collided with a church minibus in rural Texas, killing 13 people, acknowledged he had been texting while driving — highlighting the dangers of sending messages on smartphones while behind the wheel.

Texas Department of Public Safety Sgt. Conrad Hein wouldn't comment Friday on whether texting might have played a role in the Wednesday collision on a two-lane road about 75 miles west (120 km) of San Antonio, near the town of Concan. But officials have said the truck driver appeared to have crossed the center line.

Jennifer Morrison, the investigator in charge of the team from the National Transportation Safety Board, would only say that distracted driving will be among the issues investigated.

The witness, Jody Kuchler, a 55-year-old self-employed welder, told The Associated Press he and his girlfriend were driving back to their home in the nearby town of Leakey when he came across a truck that was driving erratically across the road.

"He kept going off the road and into oncoming traffic and he just kept doing that," said Kuchler, who first shared the account of what happened with the San Antonio Express-News. 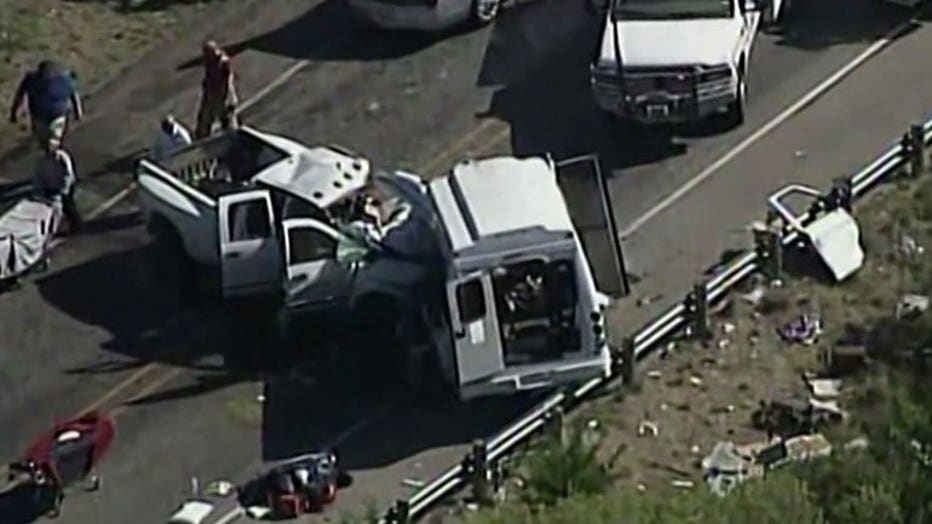 Kuchler, who followed the truck for at least 15 minutes, said he called the sheriff's offices for both Uvalde and Real counties and told them "they needed to get him off the road before he hit somebody."

Kuchler said he witnessed the crash and afterward, he checked on both the bus and the truck and was able to speak with the driver of the truck, who the Department of Public Safety has identified as 20-year-old Jack Dillon Young, of Leakey. 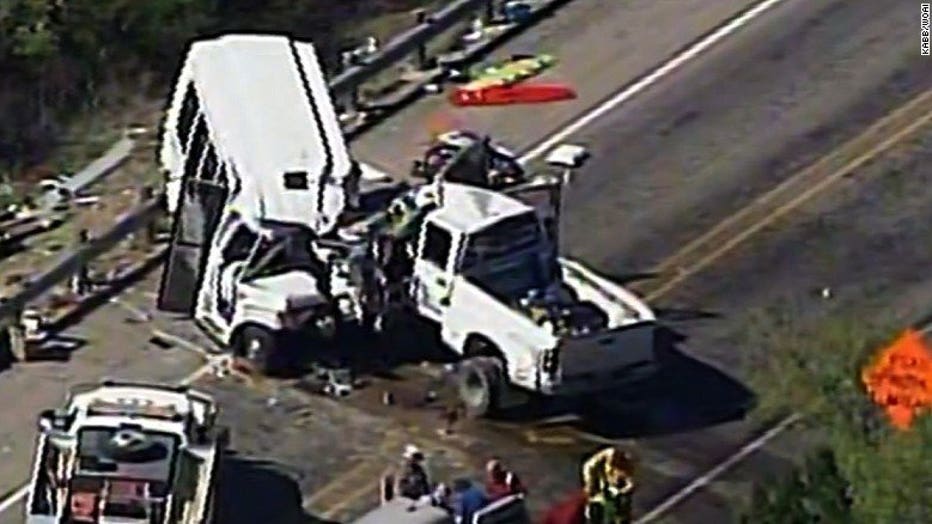 Texas is unusual in that it has no statewide ban on texting while driving. Dozens of cities across the state prohibit the practice, but local ordinances may not have applied in the rural area where Wednesday's crash occurred. Laws in 46 other states ban sending or reading email, using apps or engaging in other use of the internet while driving.

The Republican-controlled Texas Legislature approved a statewide ban in 2011 but it was vetoed by then-Gov. Rick Perry, who characterized such prohibitions as government micromanagement and said educating drivers was the key to deterrence. A similar proposal passed the Texas House a few weeks ago but has yet to make it to a Senate floor vote. 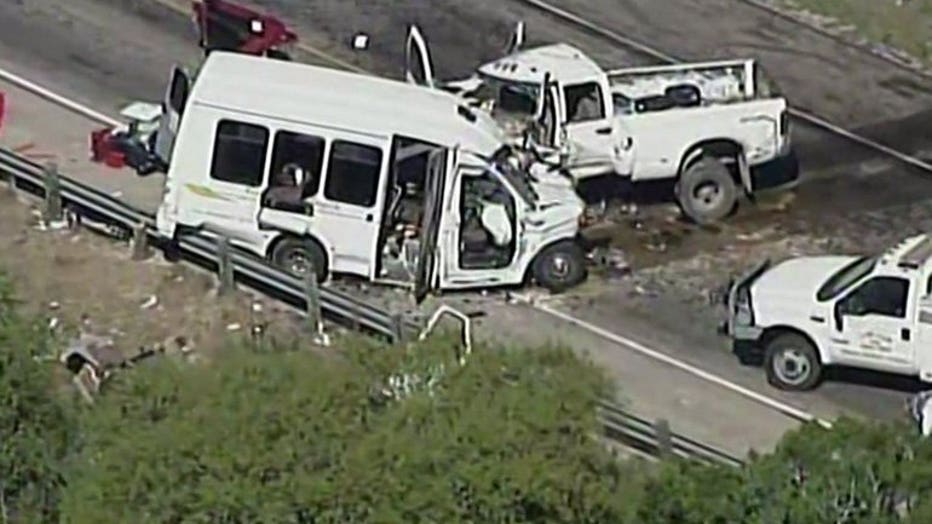 The wreck on Wednesday occurred along a curve in the road where the speed limit is 65 mph, according to Department of Public Safety officials. The bus occupants — members of First Baptist Church of New Braunfels in Texas — were returning from a three-day retreat in Leakey, about 9 miles (15 kilometers) from where the crash happened.

Twelve people on the bus died at the scene, authorities said. Another died at a hospital. One bus passenger remains hospitalized in serious but stable condition, according to the church.

Young, the driver of the pickup, also remains hospitalized.

The number of motor vehicle deaths in the U.S. last year topped 40,000 for the first time since 2007, according to the National Safety Council. The number of vehicle crash deaths in Texas rose 7 percent last year to 3,464, slightly higher than the national rise. One-in-10 driving fatalities in 2015 were caused by some kind of distraction, the U.S Department of Transportation said.

Morrison said most, if not all, of the bus occupants in the Texas crash — who ranged in age from 61 to 87 — were wearing seat belts. The driver and front-passenger seats had three-point lap-and-shoulder belts while the rest of the seats behind had lap belts only, she said.

Three-point seat belts are always preferable to lap belts because they hold the upper torso in place and help prevent head injuries, said automotive safety advocate Joan Claybrook. One of the problems with lap belts only is that in a frontal impact crash, people will remain in their seats but their upper bodies will go forward and their heads can strike the back of the seat in front, she said.

If the passengers wearing lap-only belts are seated along the sides of the buses, instead of facing forward, they will often hit their heads on the sides of the vehicle or the windows, said Henry Jasny, senior vice president of Advocates for Highway and Auto Safety. A frontal crash of this type would be like "hitting a brick wall," he said.

The NTSB identified the church vehicle as a 2004 Ford E-350 series van that had been converted to a minibus. According to the National Highway Traffic Safety Administration, the only safety issues identified with that vehicle model from that particular year was a fuse problem reported in 2007 in vehicles that had been retrofitted to become ambulances.