U.S. Marshals say 26-year-old Dmonte Williams is a registered sex offender and is not living at the Milwaukee address he has given to authorities.

"We don’t believe he is at that residence," the U.S. Marshal assigned to the case told FOX6. "He’s shown some violent tendencies."

According to the U.S. Marshal assigned to the case, Williams -- who also goes by the nickname "Moose" -- has two open investigations.

One of the cases happened last October in the Village of Richfield.

"The victim was scared for her life," the U.S. Marshal explained.

U.S. Marshals say Williams and an accomplice robbed an elderly woman. They knew a door in the home would be unlocked. They ambushed the victim and threatened to throw her down a staircase.

They left with her cell phone and nearly $50,000 dollars in jewelry. Williams pawned several items in West Allis.

A search of Williams' registered home uncovered the remaining jewelry. He was not home when the warrant was executed.

Shortly after the crime, Williams was pulled over in La Crosse County and arrested for being in possession of a large amount of marijuana.

"We know he’s likely involved in the sale of narcotics," the U.S. Marshal explained. 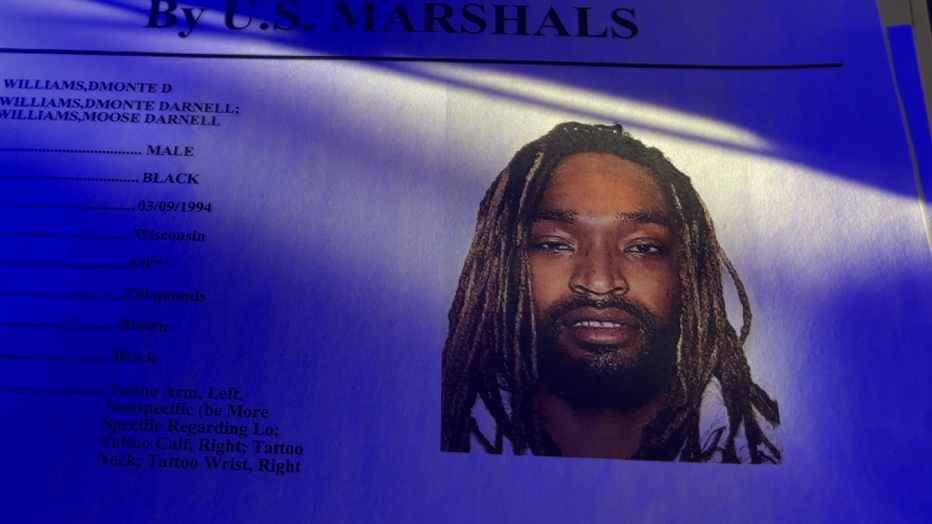 Williams was later released on a signature bond.

Williams is 6'7" tall and weighs 230 pounds. He can be identified by the tattoos on his neck and arms.

Given his criminal history, U.S. Marshals, say it is crucial they find Williams.

"I think peace of mind for the victim, getting a little justice for her would be a good cause," the U.S. Marshal said. "Through our investigation, it appears he is potentially out of state."

U.S. Marshals ask anyone with information on Williams' whereabouts to send a tip to 414-297-3707. All those who call the tip line can remain anonymous.

Daetwan Robinson on Friday, March 5 pleaded guilty to three counts of felony hit-and-run for a crash that killed two young sisters and injured their cousin on Milwaukee's north side in 2019.