MADISON — The Wisconsin Supreme Court refused Wednesday to allow an investigation into Gov. Scott Walker's recall campaign to begin anew, even as the court decided to preserve evidence in the case. 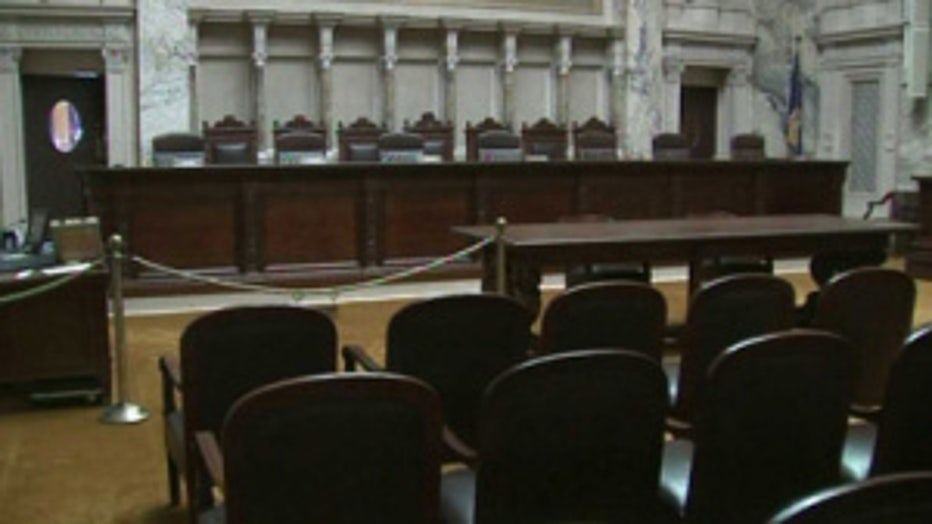 The Wisconsin Government Accountability Board and Milwaukee prosecutors launched the investigation in 2012, to look into whether the Republican governor's campaign illegally coordinated with outside conservative groups on issue ads.

"We conclude that Attorney Schmitz's motion does not present any grounds to reconsider our prior decision," the majority justice wrote in the 4-1 decision.

Schmitz plans to appeal if he has the necessary resources, multiple news outlets reported. Randall Crocker, a Milwaukee attorney who had been representing Schmitz in the case, didn't respond to multiple requests about Schmitz's intentions. 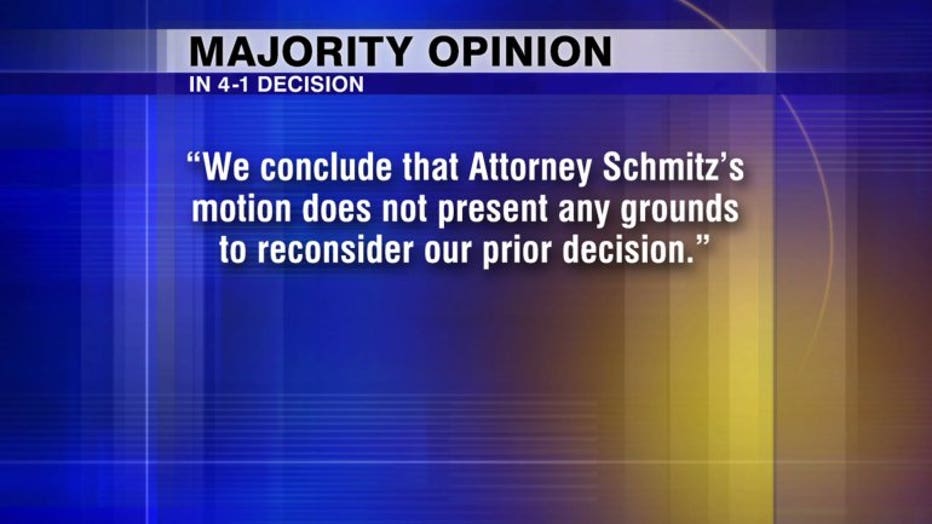 No charges were ever filed in the case, known as John Doe II because of a separate, previous investigation into Walker's operation when he was Milwaukee County executive. Six people were convicted of a variety of crimes as a result of the earlier Doe probe. 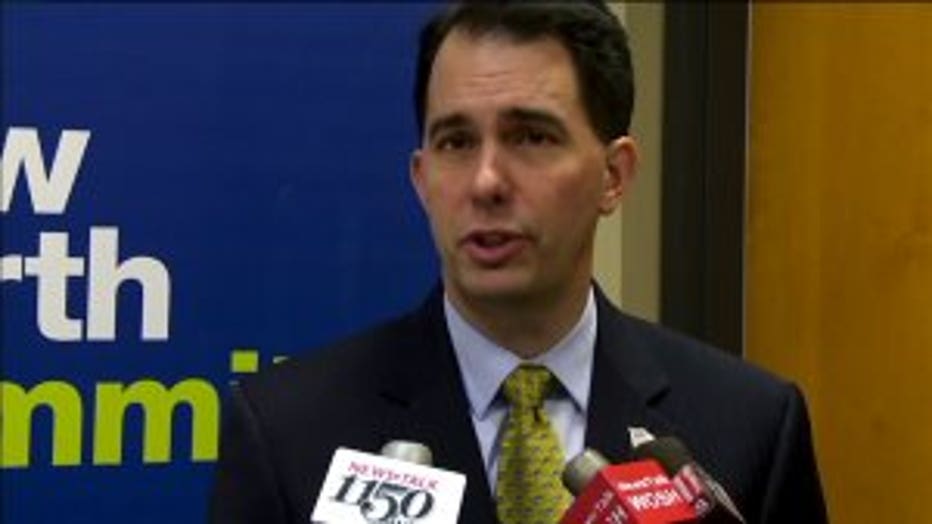 Walker on Wednesday said the state Supreme Court's decision validated his belief that no charges would be filed in the second investigation.

"It speaks for itself. We said all along, for the last several years, that it would end this way," Walker told reporters. "We`re glad for the people of this state."

John Doe investigations are similar to grand jury proceedings, in that information is kept secret and prosecutors can compel witnesses to testify as they consider whether to pursue criminal charges.

Schmitz's request to the court, like all proceedings in the Doe investigation, remain under seal. Yet the court in its Wednesday decision said that Schmitz had wanted to continue investigating a different kind of coordination between Walker and the outside groups.

The four justices in the majority ruled that Schmitz had "forfeited" his right to investigate that coordination because he'd only raised the issue on appeal.

In its decision, the court said Schmitz's appointment as special prosecutor was invalid. Yet it said the "prosecution team" could appeal the case to the U.S. Supreme Court, causing confusion about whether Schmitz or the five county district attorneys who had initially appointed him would have to bring the appeal.

"What a mess this court has wrought!" the long dissenting justice, Shirley Abrahamson, wrote in her dissenting opinion.

The court said Schmitz must return evidence to the John Doe targets, but allowed him to make copies of the evidence that will be kept under seal at the state Supreme Court. 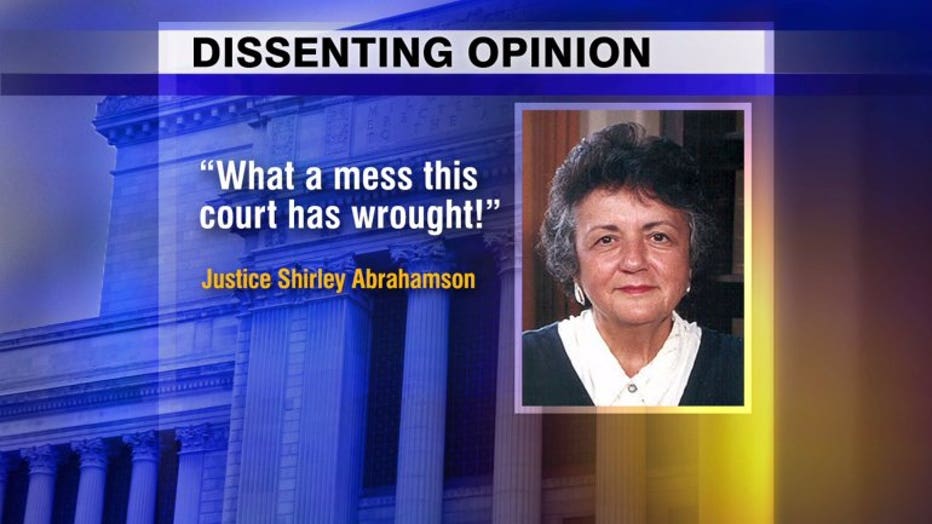 Conservative attorneys hailed the decision as the end to a case that had violated the free speech rights of the John Doe targets.

"The likelihood that the John Doe investigation will be resurrected is almost zero," said Rick Esenberg, general counsel with the Wisconsin Institute for Law and Liberty.

Milwaukee attorney Jeremy Levinson, who has represented Democrats in election disputes, said the ruling will create new challenges for prosecutors who are pursuing criminal cases in the future.

"I have to hand it to these lawyers (for the John Doe targets). They got aggressive in a way that`s very unusual for targets of a criminal investigation, and they won," Levinson said. "They were able to bring state law enforcement and regulatory forces to a complete halt."

Lawmakers and Gov. Walker in October banned prosecutors from using Wisconsin's John Doe laws to investigate political and ethics violations in the future.

Instead, prosecutors must use the grand jury system, which supporters of the changes said will create a more open process.

"Having these investigations done in secret, where the people being targeted can’t tell anybody what’s happening to them, raises the risk of abuse," Esenberg said.

Yet Levinson argued that the state Supreme Court went beyond the John Doe case in its earlier ruling this summer. Its decision that campaigns and outside groups could legally coordinate on issue advocacy will have long-lasting, negative effects, he said.

"This is a case in which the Supreme Court has abruptly changed many aspects of well-settled law ," he said.

The Wisconsin Supreme Court has issued yet another decision in John Doe II, the protracted and secret investigation into whether a political group exercising free political speech rights improperly coordinated with Governor Walker during the recall election. For the second time this year, the Wisconsin Supreme Court directed that the John Doe proceeding be halted based upon the Court’s conclusion that prosecutors did not have a legal basis to investigate these political groups when they commenced John Doe II. The Court found that campaign finance statutes upon which the prosecutors relied violate free political speech rights guaranteed by both the United States Constitution and the Wisconsin Constitution.

Thus, the Court said that the matter is closed, and the evidence seized through subpoenas and search warrants issued as part of the investigation must be returned. That has not yet occurred, and the owners of that property are understandably upset.

The special prosecutor has indicated that he intends to appeal. The only level of appeal left is to the Supreme Court of the United States (SCOTUS), but it is very unlikely SCOTUS would take the case. In the unlikely scenario that SCOTUS were to accept the case, it would more than likely uphold the Wisconsin Supreme Court's decision.

I write because I have indirectly been asked as Wisconsin Attorney General to intervene on behalf of the John Doe targets. The Wisconsin DOJ played a role in the proceedings before the Wisconsin Supreme Court, although it was not a leading role. DOJ represented the judge who was assigned to John Doe II after the initial judge recused herself. The new judge quashed subpoenas issued in the John Doe proceeding, finding that the special prosecutor's theory of the case was not supported by Wisconsin law. The special prosecutor appealed that ruling, and DOJ represented the judge in the Wisconsin Supreme Court.

Last week, the Wisconsin Supreme Court again ordered that the seized evidence be returned to its owners. Given that DOJ represented the judge who first found that the John Doe proceeding was invalid, DOJ certainly has no intention of standing in the way of those orders. The Supreme Court’s order should be carried out forthwith. DOJ has no authority to represent those individual property owners in their effort to enforce the Supreme Court’s order.

This has been a long, unfortunate chapter in Wisconsin's history. The courts have unequivocally rejected the John Doe investigation, both in the manner in which it was carried out, as well as the legal arguments brought by the prosecutors. The Wisconsin Supreme Court has now ordered that the property seized be returned. For everyone involved, the special prosecutor should end the case, and the property seized from the individuals in this case should be returned immediately.