MADISON — Conservative justices on the Wisconsin Supreme Court cast doubt during arguments Tuesday about the power of Gov. Tony Evers' health secretary to issue a “safer-at-home” order closing most nonessential businesses in the state. 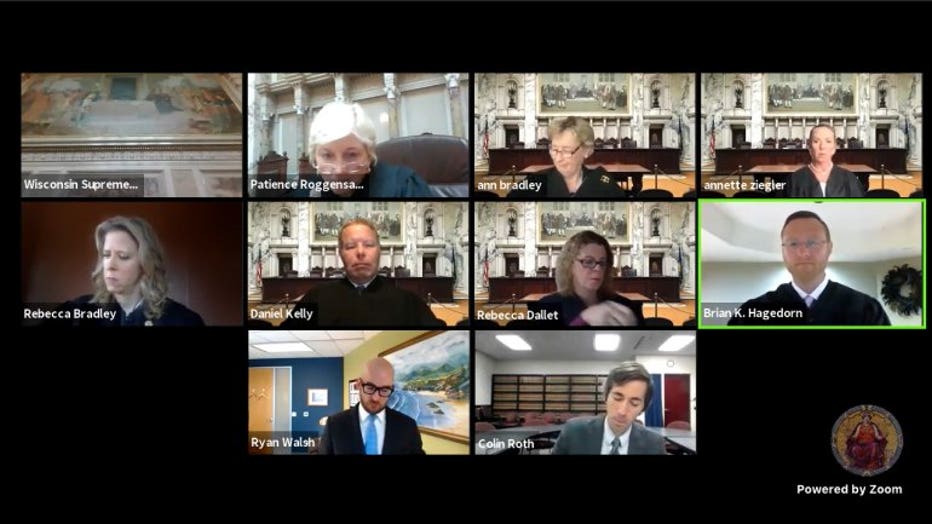 The court held an hour-and-a-half of oral arguments on Tuesday, May 5 in a case brought by Republican legislative leaders. They want the court to block the order issued by Department of Health Services Secretary-designee Andrea Palm, arguing that Palm exceeded her authority in issuing the stay-at-home order that's set to run until May 26.

One justice, Rebecca Bradley, compared the order to "tyranny" and brought up the internment of Japanese Americans during World War II-- while the Evers administration argued lives are on the line. 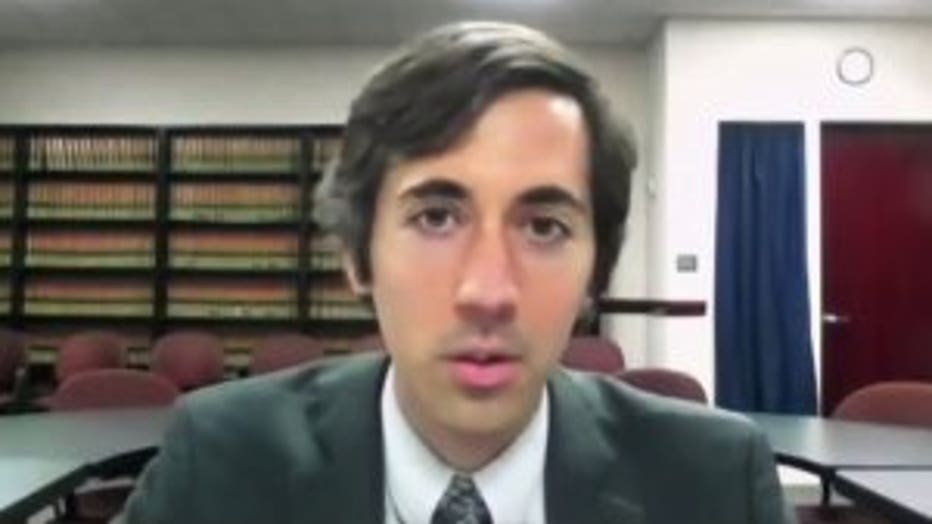 "People will die if this order is enjoined with nothing to replace it," said Colin Roth, Assistant Attorney General of Wisconsin.

Conservative justices zoomed in the order's legal foundation, during the arguments hosted on Zoom.

"Where in the Wisconsin constitution did the people confer authority on a single, unelected cabinet secretary to compel almost six million to stay at home and close their businesses and face imprisonment if they don't comply, with no input from the legislature, without the consent of the people?" asked Justice Rebecca Bradley.

"That legislative intent that grants DHS to do whatever is necessary to combat a novel, deadly communicable disease, like the one we are facing today, which is where we find that consent," Roth answered.

State law does say DHS may "forbid public gatherings in schools, churches, and other places to control outbreaks and epidemics" -- and "may authorize and implement all emergency measures necessary to control communicable disease." 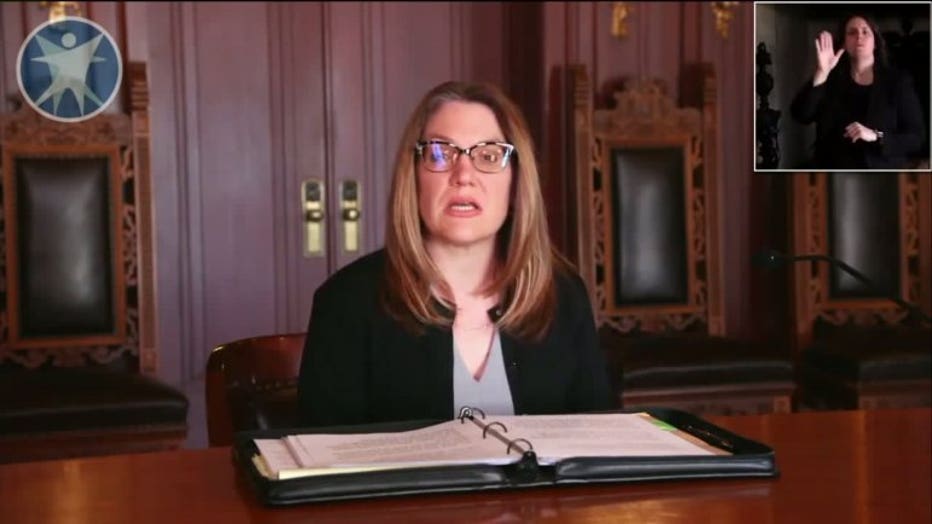 Health Services Secretary-designee Andrea Palm issued the order, which carries a possible punishment of 30 days behind bars and a $250 fine for offenses.

"She can all by herself sit down at her computer keyboard, write up a description of behavior and make it criminal?" asked Justice Daniel Kelly.

"What I would say, your honor is the legislature created this statutory scheme itself," Roth said. 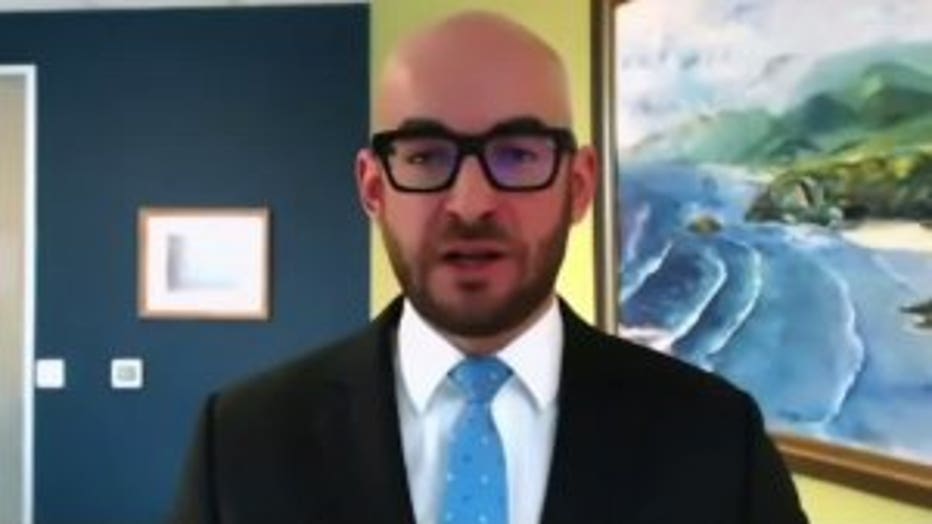 "Every day that DHS and this administration proceeds as if they are not subject to 227, we are irreparably harmed as the entity that created DHS and gave it its powers in the first place," said Ryan Walsh, attorney for the Wisconsin Legislature.

On that point of rule-making, Justice Rebecca Bradley brought up the internment of Japanese Americans during World War II. "One of the rationales were hearing justifying the secretary’s order in this case is well, it’s a pandemic and there isn’t enough time to promulgate a rule and have the legislature involved in the details of the scope of the secretary’s authority. I’ll direct your attention to another time in history, in the Korematsu decision, where the court said the need for action was great and time was short and that justified and I’m quoting, ‘Assembling together and placing under guard all those with Japanese ancestry,’ in assembly centers during World War II. Could the secretary, under this broad delegation  of legislative power, or legislative-like power, order people out of their homes, into centers where they are properly socially-distanced to combat the pandemic?" The justice then asked what limits are placed on DHS.

Assistant Attorney General Roth responded, "You honor, I think you take the statute text as it is. The statutory text empowers DHS to take all necessary actions to combat communicable diseases, I understand your honor might be uncomfortable with that broad range of authority in the sense that it may allow DHS to go too far. I humbly submit to you that that concern is best addressed to the legislature, asking them to amend the statute that they passed."

In arguing for the statewide stay-at-home order, without going through the formal rule-making procedure, Roth said the virus doesn't respect county boundaries. "This started out predominately in Madison and Milwaukee. And we just had this outbreak in Brown County in the meat-packing plants. This is after 'safer-at-home.' The cases in Brown County in the span of 2-week surged over tenfold, from 60 to almost 800. That’s two-weeks that would be required for emergency rule-making."

"These were due to the meatpacking, though, that’s where the Brown County got the flare, it wasn’t the regular folks in Brown County," declared Chief Justice Patience Roggensack.

In response, the assistant attorney general pointed out, "I understand that your honor, but the point I’m trying to make is that these flare-ups, when 'safer-at-home' is steadily lifted in stages, are going to happen all across the state. They are gong to happen very quickly. It’s a wildfire, it’s smoldering, but a guest of wind is going to fan the flames and it’s going to explode again. That’s what’s going to happen, you’re seeing that all across the world as these restrictions are lifted."

Republicans suggest the court give DHS six days to come up with a new rule with later legislative oversight.

The cities of Racine and Milwaukee joined briefs supporting the order. Wisconsin's Chamber and the Tavern League filed briefs against.

Wisconsin Attorney General Josh Kaul released the following statement regarding the litigation of the Safer at Home order:

“The Legislature’s lawsuit, which asks for Safer at Home to be struck down, is beyond reckless and endangers the health and security of Wisconsinites,” said AG Kaul. “Although the Legislature asked for a ‘pause’ before the relief it seeks is issued, it is arguing that Safer at Home is invalid right now. Rather than waiting for a rulemaking process that it concedes will take more than a week to play out, the Legislature must act immediately either to extend the emergency declaration or to pass legislation that will help keep Safer at Home in place so Wisconsinites aren’t left without protection from the law in midst of a pandemic that has already taken the lives of hundreds of Wisconsinites and tens of thousands of Americans.

“Instead of prematurely declaring victory, crossing our fingers, and hoping for the best, we must continue working to stamp out the coronavirus with a plan based on input from public health professionals. As we do so, it’s vital that policymakers recognize that fighting the coronavirus doesn’t mean choosing between public health and economic growth. They go hand in hand. For the economy to be fully, successfully, and durably reopened, Wisconsinites must have confidence that they can go to work and shop safely, and we must avoid a resurgence of exponential growth of COVID-19 cases. I hope the Legislature will work constructively with the executive branch to protect the health and wellbeing of Wisconsinites and to ensure that we have the resources in place that will allow for the reopening of the economy be as successfully as possible.”