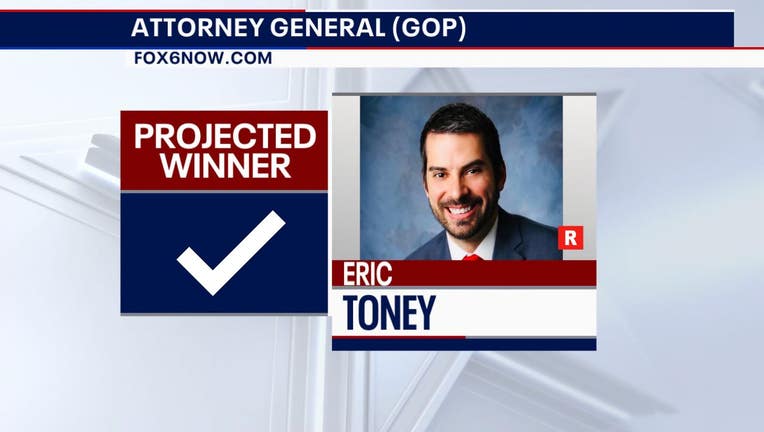 Toney played up his courtroom experience. He has served as Fond du Lac County’s top prosecutor since 2013. Jarchow tried to paint himself as the more conservative persona, criticizing the federal government, transgender athletes and President Joe Biden for rising inflation.

Jarchow conceded early Wednesday as unofficial but nearly complete results showed him trailing Toney by fewer than 4,000 votes, or about 0.6% of the vote.

"In a close and highly contested race, we came up just short," Jarchow tweeted. "It’s time to unite behind @EricJToney and ensure he has the resources and support needed to fire Josh Kaul. Eric Toney has my full support."

Karen Mueller, who ran as an outsider who wants to decertify the 2020 presidential election results, ran a strong third with nearly 26% of the vote.

Jarchow outraised Toney as he ran to the right of him in the race. But Toney touted his experience in the courtroom, emphasizing that Jarchow had never tried a criminal case. His mantra was the attorney general should be a prosecutor, not a politician.

Kaul's campaign on Wednesday tried to frame the race as being about stark contrasts and hot-button issues, including gun rights and abortion rights. Toney supports an 1849 state law banning all abortions except to save the life of the mother, while Kaul is suing to overturn the law.

Kaul also supports universal background checks and a "red flag" law that would allow judges to take guns away from people determined to be a threat to themselves and others, efforts that Toney opposes.

"Josh Kaul’s days of coddling criminals and defunding police and prosecutors will come to an end in November as we hold him accountable for his failures during a period of historic violence and drug deaths in Wisconsin. On day one, I’ll stand with our cops, begin cleaning up the mess Josh Kaul has created at our Crime Labs, and begin filling the crucial public safety prosecutor and DCI Agent positions Kaul has left unfilled during historic violence in Wisconsin."

"I’ll work with the legislature to obtain original prosecutorial authority in Milwaukee County to end the record murders and drug epidemic. Milwaukee crime bleeds across Wisconsin and by protecting Milwaukee, we protect all of Wisconsin."

"I am thankful and humbled for the trust the voters placed in me. When this campaign started in April of 2021 I made the resolution that this campaign was going to be won through hard work and the same grit I was raised with as the son of a cop. The voters responded to our message of restoring respect for the rule of law and stopping the epidemic of drugs and violent crime that has swept Wisconsin."

"I want to thank Adam Jarchow and Karen Mueller for their run. They made our party stronger and me a better candidate, and I look forward to working with them to unite our party. Together we shall put Josh Kaul’s record of failure on trial and make sure that we elect a Prosecutor and not a Politician as Wisconsin’s next Top Cop."