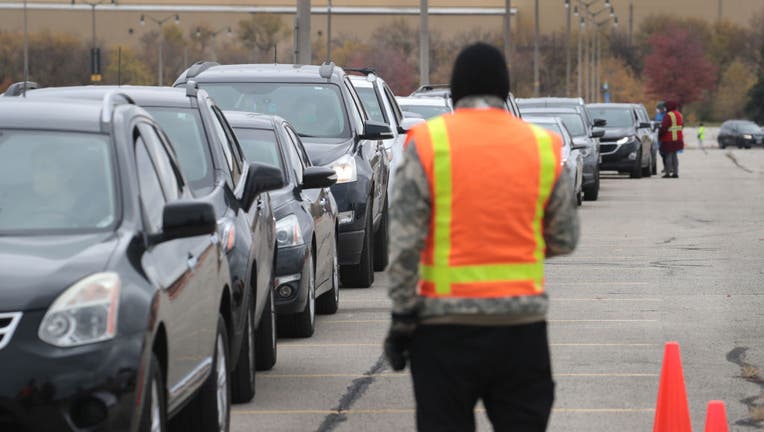 Residents line up at a mobile COVID-19 test center staffed by members of the Wisconsin National Guard on the grounds of Miller Park on October 29, 2020 in Milwaukee, Wisconsin. (Photo by Scott Olson/Getty Images)

MADISON, Wis. (AP) - Faced with hospitals running out of beds and staff to treat the rising number of COVID-19 patients, the leader of the Wisconsin Hospital Association pleaded Thursday with Democratic Gov. Tony Evers and state legislative leaders to come together immediately to fight the virus before the current crisis becomes a catastrophe.

“Wisconsin faces a public health crisis the likes of which we have not experienced in three generations,” Borgerding said. “A crisis of this magnitude caused by a virus that is so clearly raging across all of Wisconsin demands a unified and substantial response. Your joint leadership is critical to improve this situation, allowing everyone to get back to our way of life sooner.”

Republican Assembly Speaker Robin Vos, who has sued Evers over his orders to slow the virus and who has not put forth any specific alternative plan of his own, said in a statement that he agreed more needed to be done to fight the virus.

“I join the call for unity in Wisconsin and hope my Senate colleagues and the governor can join me in putting aside partisan differences to find bipartisan answers,” Vos said.

Republican Senate Majority Leader Devin LeMahieu did not immediately return messages seeking comment. Evers’ spokeswoman reacted by referring to Evers’ previous comments that mirrored the exhortation from Borgerding for policymakers to come together.

Evers earlier this week proposed a roughly half-billion dollar package of ideas to address the virus. Vos responded by outlining broad ideas Republicans support, but not specific legislation. Evers and Republican leaders were expected to meet Friday to discuss ideas, their first such meeting in months.

The Legislature hasn’t met since April when it approved a COVID-19 relief bill. Republicans have fought Evers in court over his attempts to curb the virus spread, including his “safer at home” order that was struck down by the conservative-controlled Wisconsin Supreme Court in May and his current mask mandate that the court heard arguments over on Monday.

As of Thursday, there were 2,104 coronavirus patients hospitalized across the state, down slightly from an all-time high recorded Tuesday.

There were 83 more deaths and 6,635 new positive cases reported by the state Department of Health Services on Thursday. That brings the total number of cases to nearly 338,500 and deaths to 2,876. There were 1,606 new cases per 100,000 people in Wisconsin over the past two weeks, which ranks fifth in the country for new cases per capita, according to data from Johns Hopkins.

Meanwhile, Dane County authorities say a significant number of inmates have tested positive for COVID-19 in the last 24 hours. Between Wednesday and Thursday, a total of 38 inmates tested positive — after only one inmate had a positive test a week ago. So far, all are asymptomatic or have mild symptoms. Sheriff David Mahoney is requesting the release of as many COVID-19-positive inmates as possible, while those who need to stay in jail will be isolated and monitored.

In a sign of how bad the situation is for hospitals, one of central Wisconsin’s largest health systems is planning to send some coronavirus patients home in order to make sure there are enough hospital beds for the “sickest of the sick.”

Earlier this month, Mayo Clinic Health System in western Wisconsin announced that it would suspend elective medical procedures to try to manage its hospital capacities. And earlier this week, Children’s Hospital of Wisconsin said it would accept non-COVID-19 adult patients to take pressure off other Milwaukee area hospitals.

“We must do much better as a state and with greater urgency,” Borgerding wrote to Evers and legislative leaders.

He called for instituting a statewide mask policy; affirming the authority of counties and municipalities to adopt their own strategies; passing a version of the state chamber of commerce’s “back to business” plan; passing the Evers proposal to provide hospitals with $105 million to increase hospital capacity and workers; and opening more alternative care facilities across the state so people don’t have to travel to the only one outside of Milwaukee.

He also called for maintaining and expanding testing capacity and contact tracing and permanently allow out-of-state health care license holders to work in Wisconsin. The current exemption is scheduled to end on Jan. 20, Borgerding said.

Contact tracing is one of the most critical jobs in helping slow the spread of COVID-19. With cases surging, that strategy is starting to struggle.

The DHS also reported that there are 17 COVID-19 patients at the alternate care facility at Wisconsin State Fair Park.