Racine County Sheriff Christopher Schmaling unveiled on Thursday, Oct. 28 the results of an investigation regarding possible election law violations throughout Racine County and Wisconsin. While the sheriff alleges the law has been broken, he is not yet recommending charges.

RACINE, Wis. - Racine County Sheriff Christopher Schmaling unveiled on Thursday, Oct. 28 the results of an investigation into possible election law violations throughout Racine County and Wisconsin. While the sheriff alleges the law has been broken, he is not yet recommending charges.

"Election statute was in fact not just broken, but shattered by members of the Wisconsin Elections Commission," Schmaling said.

The case started with Shirley, a resident of the Ridgewood Care Facility in Mount Pleasant, who died in October 2020 and voted in the presidential election. Her daughter, Judy Westphal-Mitchell, filed a complaint alleging her mother with "diminished mental capacity" was taken advantage of.

"Judy was obviously concerned and asked, you know, ‘How can you actually do this?’ And she was informed that the employees would inquire as to how the resident had voted in the past and they would basically follow those guidelines and vote accordingly," Luell said. "Judy, quite astutely asked, ‘Are you telling me that if my mother can only recall JFK, that the staff would have voted Democrat for her?’ And the answer is yes."

"How could my mother know that her vote was recorded accurately, she couldn't see. Judy was informed by the staff that the staff hoped that the other employees would be honest." 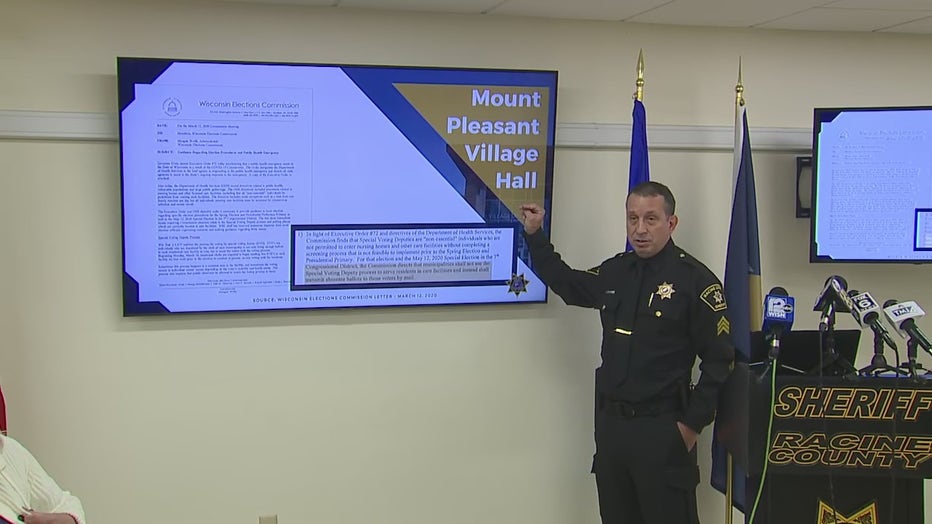 Luell found the Ridgewood Care Facility had an unusual surge in voting activity in 2020. In past years it was roughly ten voters, but in 2020 it rose to 42. Families of eight of them say they think their relatives didn't have the cognitive ability to vote.

"VH would ask her own son, who are you? She couldn't even recognize her own son. And she, she happened to vote in two elections in 2020, but no other elections," said Sgt. Michael Luell, Racine County Sheriff's Office Public Information Officer.

The sheriff accuses the Wisconsin Elections Commission (WEC) of breaking the law. The commission is equally divided between Democrats and Republicans. They voted 5-1 during the pandemic – when nursing homes were limiting visitors – that municipalities across the state should not send special voting deputies into nursing homes. In normal years, they are deputized by clerks – pairs of them normally help nursing home residents vote.

"That means the staff at the facility absolutely, positively cannot, by this law. assist in the execution of the vote," Luell said. 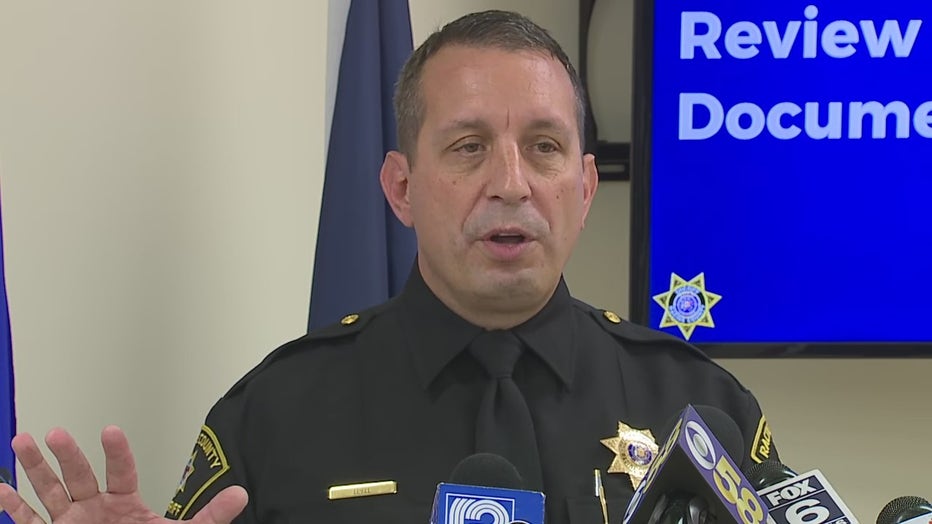 But the WEC gave nursing home staff tips on how to help.

"That is the completion of the crime right there. Crimes throughout the state. All 72 counties, every nursing home, resident care facility, right there," Luelle alleged.

The investigation only related to this one nursing home. But Sheriff Schmaling said he expects Thursday's announcement will lead to others across the state coming forward.

"Anyone who cares at all about election integrity owes the Racine County Sheriff's Department a debt of gratitude for their work today. It is horrific that WEC’s choice to violate state laws may have led to bad actors taking advantage of vulnerable citizens in nursing homes. It’s time for Democrats, the Department of Justice, and the mainstream media to take election integrity concerns seriously."

"Today’s press conference was nothing more than a publicity stunt. The Racine County Sheriff’s Department has been wasting taxpayer money in an attempt to rehash discredited claims about the 2020 election results. There weren’t any charges filed or even any suggested. The press conference didn’t shed light on any election fraud, but did reveal the Racine County Sheriff’s department may have broken the law during their own farce of an investigation.

"Just last week, the nonpartisan Legislative Audit Bureau released its election audit, and as recounts, court cases, and Trump’s own Department of Homeland Security have already proven, the LAB found the 2020 election was ‘safe and secure.’ But none of this matters to Republicans, who will go to any lengths to try to cast doubt on the 2020 election results -- including apparently breaking the law. This is yet another attempt to attack our democracy and cast doubt on a free and fair election, in which Wisconsinites elected Joe Biden."

I want to commend Sheriff Christopher Schmaling, Racine County Sergeant Michael Luell and the Racine County Sheriff’s Department for their thorough work investigating the apparent fraud and violations of elections law by the Wisconsin Elections Commission and Ridgewood Care Center.

"Whether it was seen in the Legislative Audit Bureau Audit released on Friday, or through today’s presentation by Sheriff Schmaling, it is clear that the staff and commissioners at the Wisconsin Elections Commission (WEC) are consciously deciding to ignore the law. That cannot happen. When the people who are in charge of enforcing the law actively choose to ignore it, they lose ALL credibility. I do not, and I do not know how any person in good faith can claim they have confidence that WEC will follow or enforce the election law when they so blatantly ignore it – repeatedly. There needs to be mass resignations at WEC and prosecutions where appropriate. WEC’s reputation is damaged beyond repair.

"Vulnerable people were taken advantage of and manipulated. Attorney General Josh Kaul and his office’s refusal to even be briefed on this matter is beyond disappointing. It shows that Kaul is more interested in partisan politics than enforcing the law and protecting the vulnerable.

"And to make matters worse, when Legislators passed a law this spring to prevent this behavior in the future, Governor Evers vetoed it and every Democrat voted to continue this felonious behavior.

"If the Attorney General refuses to prosecute, local district attorneys must. Whether it be Patricia Hanson in Racine, Ishmael Ozanne in Dane County, where the GAB is housed, or elsewhere, there must be consequences - legally and/or electorally. Abraham Lincoln once said "Laws without enforcement are merely good advice." He was right.

"This should not have happened last year, and cannot happen in the future. And everyone who isn’t blinded by partisanship knows this.

"The discussion about Special Voting Deputy access during the COVID-19 pandemic is over 18 months old and has occurred entirely in public meetings. Information about the topic is available on the WEC website here: https://elections.wi.gov/node/7537. Agency staff cannot speak on behalf of our Commissioners without their guidance to do so."

"And if the Wisconsin Attorney General continues to refuse to uphold the law then he should resign, too.

"With the most recent evidence of election violations in Racine, as well as the findings detailed in the Legislative Audit Bureau report, it has become abundantly clear that a statewide investigation similar to what was done in Racine in necessary. All Wisconsinites, Republicans and Democrats alike, deserve to know which state laws were broken and who should be held accountable."

"We’re confident that local law enforcement and District Attorneys in Wisconsin take voter fraud seriously and that, if there are credible allegations of fraud, they will be thoroughly investigated by local law enforcement. In the event that local law enforcement or District Attorneys need assistance in any case involving credible evidence of fraud, the Wisconsin Department of Justice is available to assist. Here, DOJ was previously in contact with Sheriff Schmaling and DOJ advised that certain interviews be conducted that had not been at that time. Significantly, no charges have been filed in this case by the Racine County DA’s office. DOJ is also currently not aware of similar allegations anywhere else in Wisconsin."

"People’s trust in Wisconsin’s elections has been tested. Many Wisconsinites feel elections are not safe and secure, and now the Racine County Sheriff’s investigation found clear violations and law-breaking within the Wisconsin Elections Commission (WEC).

"Clearly there is a severe mismanagement of WEC, and a new administrator is needed. I am calling for the resignation of Meagan Wolfe as Elections Commission Administrator.

"Elected officials can—and often do—disagree on plenty. But what is beneath the offices we hold and the responsibility entrusted to us is using our platforms to publicly and baselessly disparage and singularly belittle public servants.

"From our clerks and election administrators to members of the Wisconsin National Guard to Wisconsin Elections Commission staff, hundreds rolled up their sleeves last year, and it is because of them Wisconsin held a free, safe, and fair election last November.

"Speaker Vos’ comments are unbecoming of his office and the people we serve. It’s my expectation—and one Wisconsinites share—that elected officials in this state treat others with civility and respect. The speaker’s behavior today fell woefully short of those expectations."

"As Wisconsin’s faith in elections has faltered, the leadership of the Wisconsin Elections Commission (WEC) has contributed greatly to this distrust. These suspicions were not only confirmed but deepened by the audit conducted by the nonpartisan Legislative Audit Bureau.

"And now, the investigation results from the Racine County Sheriff’s Office have made it abundantly clear that WEC is responsible for flagrantly breaking our state election laws.

"Today, I’m joining some of my legislative colleagues in calling for the resignation of Meagan Wolfe as WEC Administrator. But, in light of the pervasive issues within the organization, we need to go further. The public’s trust must be regained, and at this point the only solution is a wholesale change of leadership, which requires the resignations of all Commissioners."