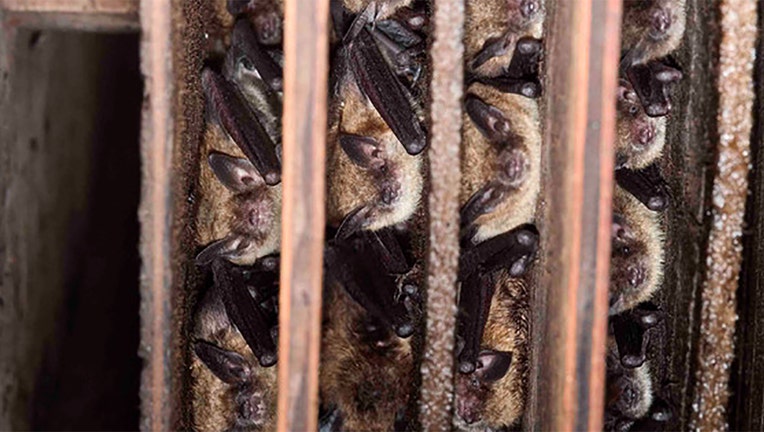 If you care, leave them there! You may find bats coming out of hibernation in spring; leave them be for their best chance at survival. (Photo Credit: DNR Bat Program)

MADISON, Wis. - The Wisconsin Department of Natural Resources reminds residents that they may encounter bats coming out of hibernation in spring.

If a bat is found outside, the best thing to do in most situations is to leave it alone. It’s easy to think a bat waking from hibernation is in need of help, the DNR said. A bat can take up to 20 minutes to become fully alert, especially when it’s cold.

While they’re waking up, bats may hold very still. Other times, they may shiver to get their blood flowing. They may also chatter or hiss or hold their mouths open for a long time. These are healthy, natural behaviors for bats as they wake up and warm up, the DNR said.

In most cases, bats need no human assistance. The DNR recommends watching bats from a safe distance.

If you find a bat this time of year, follow these steps to help take care of it and yourself:

1. If you care, leave them there! If the bat is outside and appears to be asleep, observe it from a distance without disturbing it.

2. Check for dangers. If the bat is in a place where it could interact with people, such as inside a building, you can carefully move the bat, following these guidelines:

3. Protect yourself. Never touch a bat with your bare hands; it may bite if it feels threatened. Like other mammals, bats can carry diseases such as rabies.

Bats are a vital part of many ecosystems because they consume many biting insects and agricultural and forest pests. Bats also play an important role in reducing the risks of insect-borne diseases such as West Nile virus. Cave bat populations in Wisconsin have been in rapid decline since 2014 due to the devastating fungal disease white-nose syndrome that causes extensive mortality in cave-dwelling bats.

Wisconsin's residential disconnection moratorium expires April 15. If you're not caught up on payments, you may be at risk of having your power shut off.