Controversy over a photo taken near training coffin

Controversy over a photo taken near training coffin 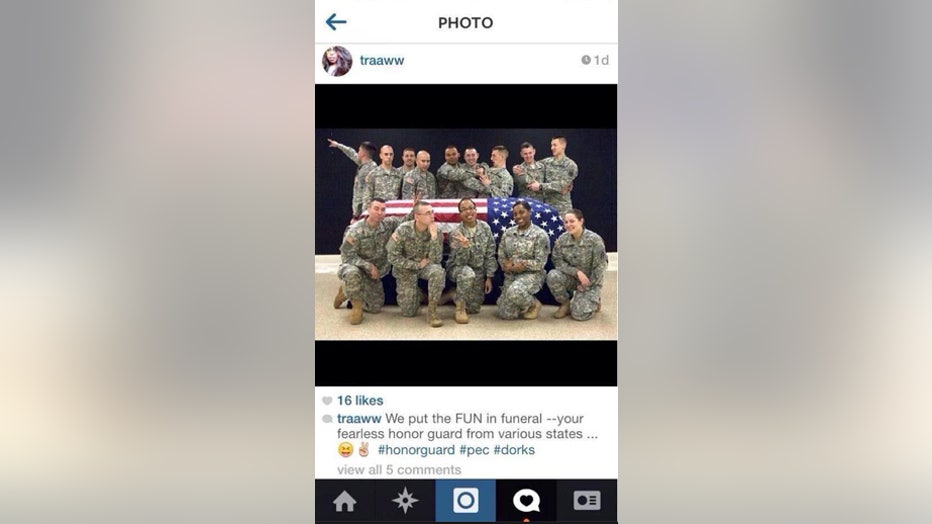 MADISON (WITI) -- The Wisconsin National Guard is investigating some controversial photos related to military funeral honors posted on social media websites. In particular, one soldier from Milwaukee is getting flack, even death threats, over the photos.

One photo shows a group of Soldiers - including one from the Wisconsin Army National Guard - in Army Combat Uniforms, posing disrespectfully around a flag-draped training casket. The caption for another photo suggests that the cold weather at a military funeral may result in a poor folding of the U.S. flag to be presented.

The photos appeared on a social media site that belonged to Spc. Terry Harrison - a member of the Madison-based 1st Battalion, 147th Aviation Regiment. The group photo with the training casket was taken at the Professional Education Center, a National Guard training facility in North Little Rock, Ark.

Harrison has been indefinitely suspended from the funeral honors detail pending an investigation into the matter.

Maj. Paul Rickert, the Wisconsin National Guard's director of public affairs, said he understands that their content is upsetting to many.

"We take this matter very seriously and the investigation will be conducted diligently," said Rickert.

Rickert also said the Wisconsin National Guard expects all Soldiers who carry out this sacred detail to handle it with professionalism and honor.

David Kurtz is the State Adjutant for Wisconsin's American Legion. He says his office was also getting flooded with emotional calls and passionate comments. Kurtz, like many others, is disappointed that a sacred image reserved for dignity and honor is being made into a mockery.

Although Maj. Rickert says the group picture was taken in front of an empty training casket, Kurtz says it's no consolation.

"It's really of no consequence because the symbolism is there, the American flag draped over a casket. I think it's recognized by anyone what it represents," said Kurtz.