Behind the scenes look at bringing ALTER EGO to life

The series, which kicked off Wednesday, brings talent and technology together to create the world’s first avatar singing competition.

LOS ANGELES - "Alter Ego" is a new singing competition that is unlike anything the world has ever seen, and FOX is breaking down the technology that goes into bringing the show — and contestants to life.

The reality series, which kicked off Wednesday, combines talent and technology to create the world’s first avatar singing competition.

"The technology behind this show is truly revolutionary," Will.i.am — one of the judges on the show — said in a behind-the-scenes video capturing the innovative and revolutionary process.

In the show, the contestants don’t perform as themselves. Rather, they are given the chance to show how they’ve always wanted to be seen, creating their dream avatar — or "alter ego" — to reinvent themselves while showcasing their unique performance style via motion capture technology.

This means the performers get to choose their alter ego’s appearance from skin color to body shape to the wardrobe.

"I’m glad that FOX decided and is having me part of this amazing music industry-changing competition series that really judges off of talent — not what you look like, not how old you are — that doesn’t matter. What matters is the talent and the voice that you bring to the ‘Alter Ego’ stage," the show’s host Rocsi Diaz told FOX Television Stations.

Ultimately, the 20 contestants can transform into the performers they’ve always wanted to be in hopes to become next-generation superstars.

"We put on a bodysuit which is really tight and leaves nothing to the imagination," James, also known by his avatar name Kingston Sol, said laughing.

"My ‘alter ego’ can do more than I can," Jacob Thomsen said of his avatar.

Next, by using motion picture and facial recognition technology, the singers can showcase their performance style in a unique way.

"It’s taking a real stage with lighting and mixing it into the actual virtual world," Michael Zinman, executive producer of the show, explained.

Using cutting technology and augmented reality, singers are transported through the lens onto the real-world stage.

"All of my actions and my voice will be duplicated by "Night Journey" — my alter ego out on the stage in front of the judges," said Israa, another contestant on this season.

Diaz said the series will find its "first-ever digital pop star" and hopes the show will change the narrative on what a pop star should be. 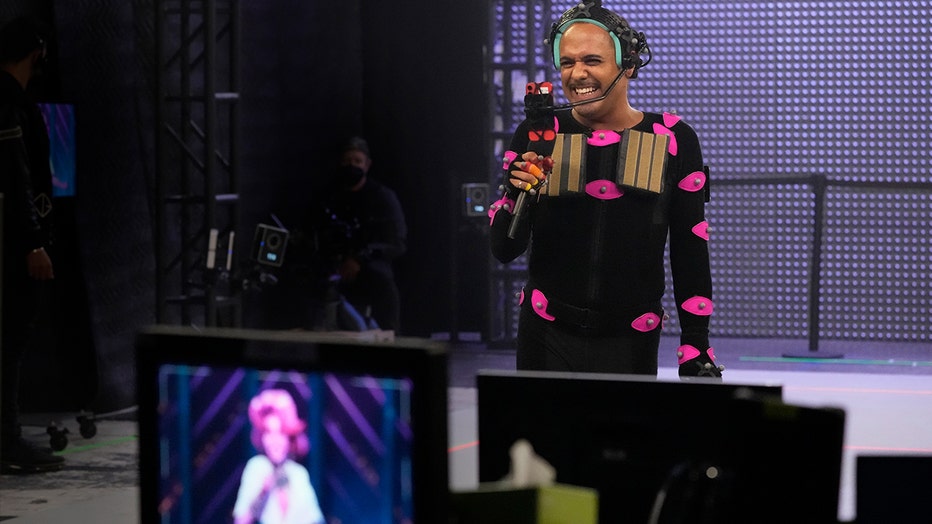 "It’s something you’ve never seen before, and when you thought you knew what this show was about, you’re just getting to the meat of it," Diaz teased. "The music industry is now forever changed after this."

Will this be the future of finding the next generational superstar? You’ll have to tune in to find out.