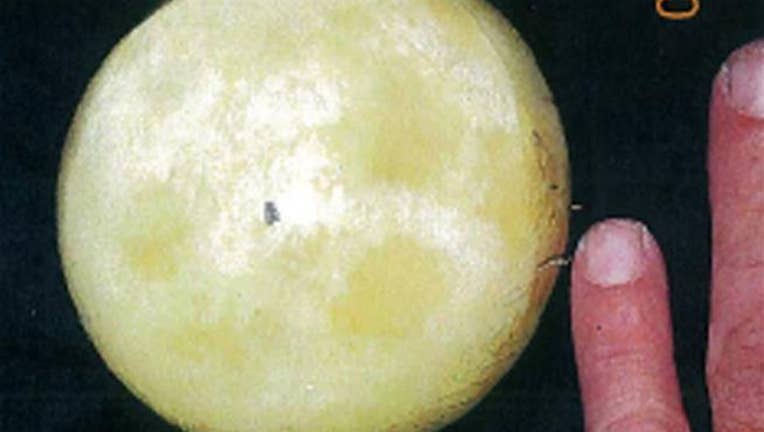 This undated file image shows a very small piece of moon rock, center, taken from Joann Davis during a sting operation. (U.S District Court for the Central District of California)

LAKE ELSINORE, Calif. – A 75-year-old widow in tough financial straits reached out to NASA about selling a speck of moon rock her late husband had given her.

Joann Davis then became the target of a sting operation at a Denny's that a federal appeals court suggested Thursday was outrageous overkill.

The lead agent "organized a sting operation involving six armed officers to forcibly seize a Lucite paperweight containing a moon rock the size of a rice grain from an elderly grandmother," wrote Judge Sidney Thomas of the 9th US Circuit Court of Appeals in the decision allowing Davis to sue, per the Los Angeles Times.

One awful detail from the 2011 incident: The agents refused Davis' request to use the bathroom, and she urinated in her pants during the two-hour ordeal at the restaurant in Lake Elsinore, Calif.

Agents also forcibly restrained her second husband, who had accompanied her to the supposed sale. Davis' first husband, Robert, worked as an Apollo 11 engineer, and he saved a paperweight with moon material and another with a bit of the heat shield.

He died in 1986, and years later Davis found herself raising grandchildren in her 70s following her daughter's death and her son's illness. She called NASA about selling the mementos.

Instead of informing her that selling moon material was illegal, investigators ordered the sting, reports the San Francisco Chronicle. A federal prosecutor later opted not to press charges.

In this week's ruling, the judges said Davis made a case that the detention violated her constitutional right regarding unreasonable seizure. She is suing agent Norman Conley, who "had no law enforcement interest in detaining Davis for two hours while she stood wearing urine-soaked pants in a restaurant’s parking lot during the lunch rush," wrote Thomas.

(Read about another NASA artifact mishap.)

This article originally appeared on Newser: Widow Can Sue Over NASA's Brutal Sting Operation on Her