All it takes is one tweet for things to go horribly wrong. Beauty website Total Beauty learned that lesson during the red carpet arrivals at the 88th annual Academy Awards.

After Whoopi Goldberg walked the red carpet, showing off a prominent tattoo on her shoulder, the website tweeted, "We had no idea @Oprah was #tatted, and we love it." Perhaps whoever is in charge of social media for Total Beauty should go ahead and acquaint themselves with the people they're tweeting about. 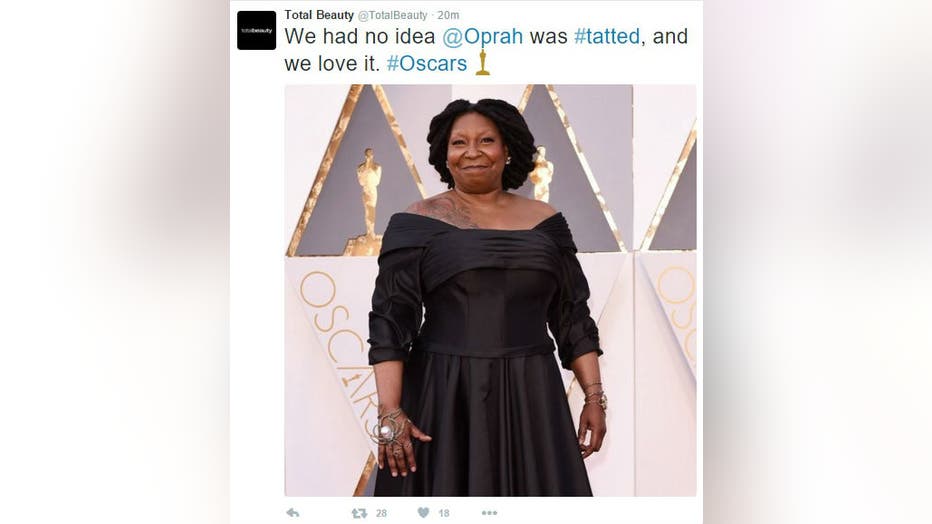 After all, Goldberg is an Oscar winner in her own right with a Best Support Actress trophy for "Ghost" -- and a Best Actress nomination for "The Color Purple."

RELATED: Oscars 2016: All the winners and nominees

As should be expected, the tweet was met with jeers by just about everyone who saw it on Twitter.

Clearly many take issue with the tweet. Given just how much the lack of Oscar diversity has been part of the discussion surrounding the awards this year certainly doesn't help with the massive mistake.

RELATED: Oscars 2016: Will Leonardo DiCaprio finally get his moment in the spotlight?

As for whether Oprah actually does have a tattoo, the jury is out. That's one mystery the world may never get an answer too. But rest-assured, Goldberg definitely does and the pictures of her from the Oscars prove it. Even if Total Beauty can't identify her.