MILWAUKEE -- "We deserve better and we expect it." Those words from Milwaukee Alderman Bob Donovan on Thursday, November 17th -- as he talked about what he says is a lack of police on Milwaukee's south side.

He and three other alderman sent a letter to Milwaukee Police Chief Ed Flynn asking for more officers to keep their neighborhoods safe. 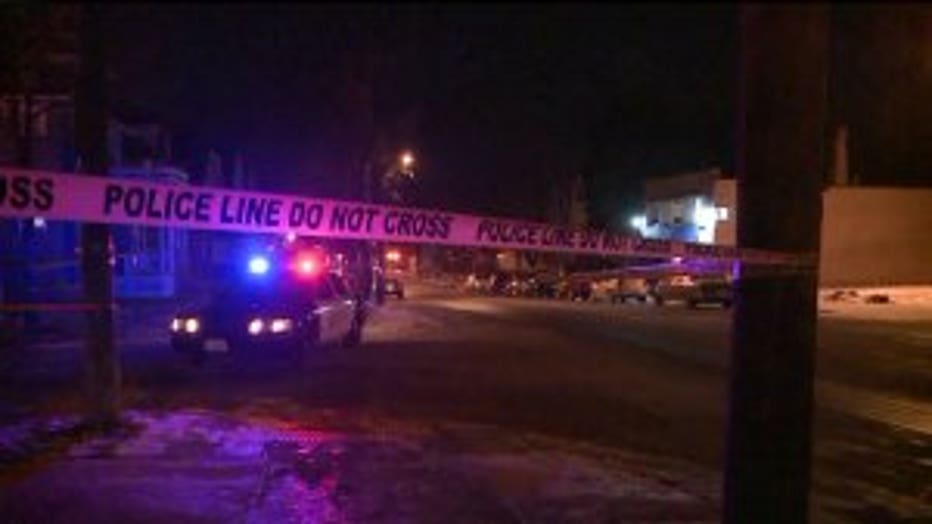 The letter outlines the size of districts and the number of officers -- with these aldermen saying they deserve more coverage.

Alderman Donovan shared several letters with FOX6 from his constituents who have witnessed an increase in crime -- and they too are asking for change.

Dozens of letters have been sent to Alderman Donovan over the past three months. Each outlines the increase in crime. One of the letters came from Steve Hassbrook -- the president of Notre Dame School of Milwaukee.

"My goal is for collaboration," said Hassbrook. 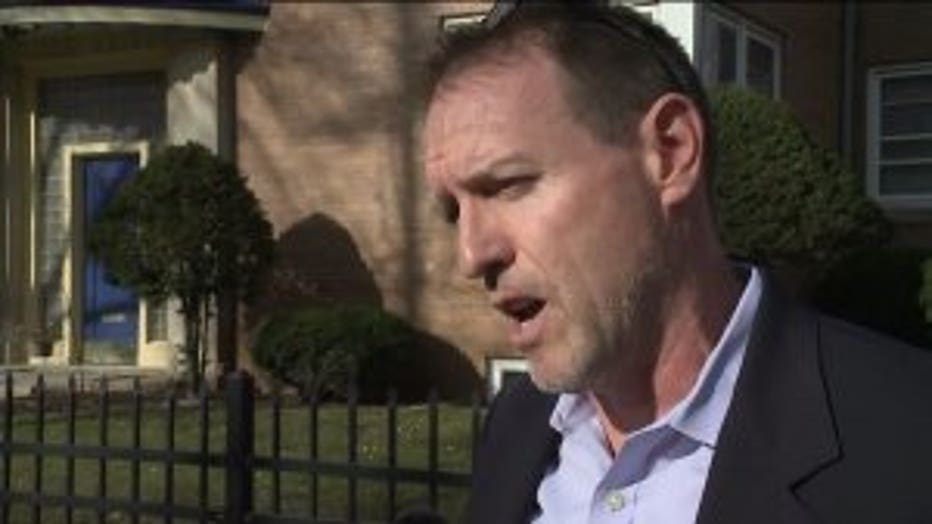 In Hassbrook's letter, he outlines a series of crimes that happened in the streets surrounding his primary school campus: A hit-and-run on Greenfield and S. Layton Boulevard, and then an attempted robbery at the corner of Greenfield and 26th. Both incidents happened as school was letting out.

"We want to avoid the kids, the families being exposed or a victim of any type of incident that would happen," said Hassbrook.

Hassbrook has asked Alderman Donovan to help him get a visible police presence around the school. 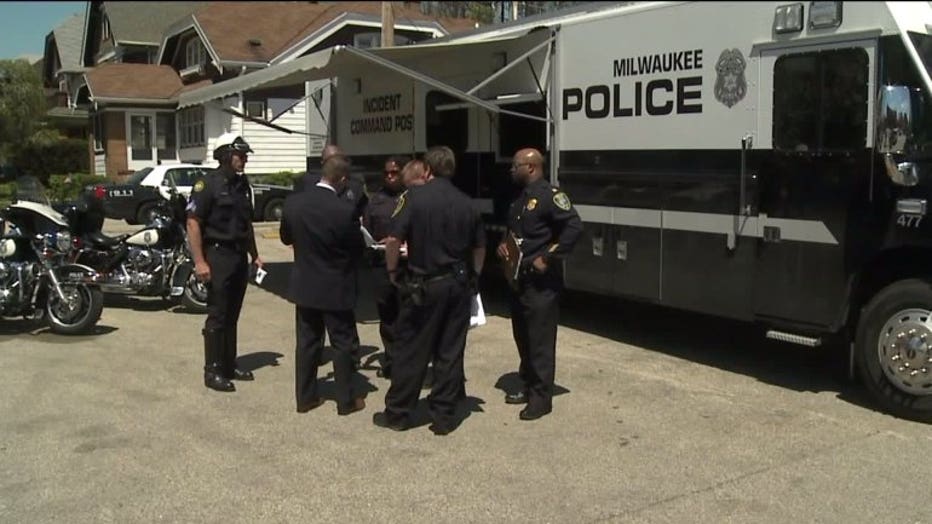 "Absolutely. We have 240 students at this campus, and another 180 east of here, so we want this area to be as safe as possible for our students and for our families," Hassbrook said.

Alderman Donovan has heard these concerns from his constituents and now, he's sent a letter to Chief Flynn.

The letter states, in part:

“The five aldermanic districts on the City’s south side are home to approximately 220,000 residents. Were the south side set on its own, it would be the third-largest municipality in the state of Wisconsin. The 215 officers assigned (131 in District 2 and 84 in District 6) to protect them cannot be taken as sufficient.

We all have for quite some time experienced unacceptable increases in response time, lack of patrol officers, and, worst of all, too many instances in which we have been informed that no officer was available to provide a timely response to a call for help. We have been regularly told by officers at community meetings that their resources are stretched and special enforcement is next to impossible.

We do not believe we are asking for a disproportionate response but only for our residents’ fair share of police resources. Our constituents are hard-working taxpayers like any others and deserve better. These residents pride themselves on keeping their neighborhoods and our City strong, but they cannot without the support of the police.”

The letter, signed by Alderman Mark Borkowski, Alderman Tony Zielinski and Alderman Jose Perez, asks the chief to deploy more officers to District 2 and District 6 saying the five aldermanic districts on the city's south side are home to approximately 220,000 residents. 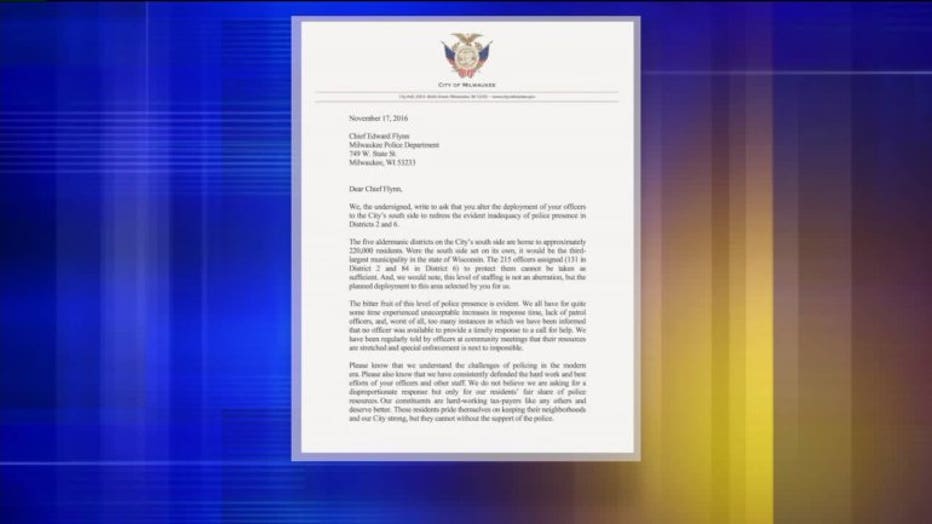 "Anything would be a plus," said Donovan. 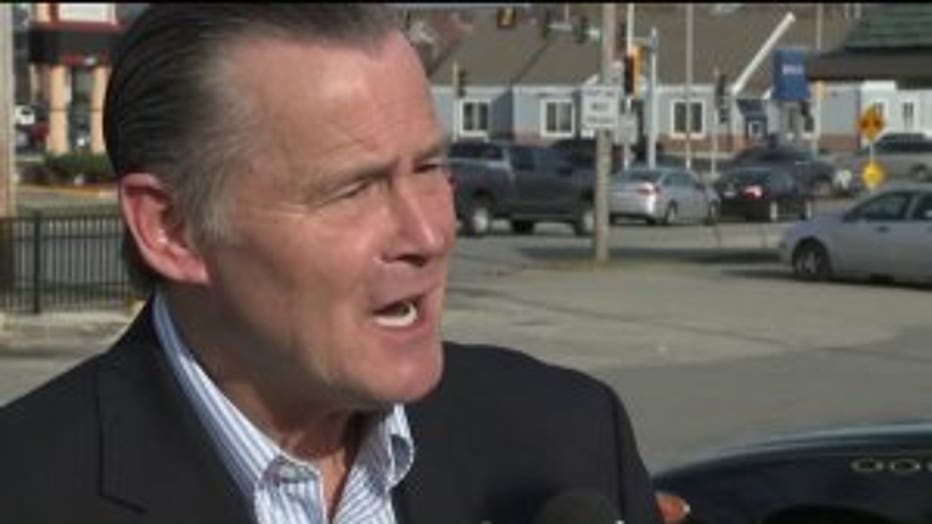 Donovan said he understands the lack of resources MPD has, but said something has to be done.

"The chief is going to make some difficult decisions. But I want him to know and the mayor to know there is indeed a south side to the City of Milwaukee, and we're sick and tired of getting half a loaf. We deserve and are asking and expect our fair share," said Donovan.

FOX6 News reached out to Milwaukee police regarding the letter and have yet to hear back.

Milwaukee Common Council President Ashanti Hamilton released a statement urging the Common Council members to rescind their letter -- saying they ignored their responsibility to represent the public safety concerns of the entire city.