Having demonstrated in Kenosha, where Jacob Blake was shot by a Kenosha police officer, family organized in Milwaukee to continue their call for justice.

MILWAUKEE - In the shadow of King Park in Milwaukee, the Blake family renewed their calls for justice, peace and unity following the shooting of Jacob Blake on Aug. 23.

The march and rally held on Saturday, Sept. 12 comes nearly three weeks after Jacob Blake as shot in the back by a Kenosha police officer.

"We want justice. We want an indictment, and we want a conviction now. Not just for Little Jake, but for all the Little Jakes around this country and around this world," Justin Blake, Jacob's uncle, said.

The family has already marched in Kenosha. Saturday, they brought their message, signs and microphones to Milwaukee.

They are keeping the spotlight on what happened to Jacob Blake as the state Department of Justice gets closer to finishing its investigation.

Once that investigation is complete, it will be handed over to a prosecutor to determine whether charges will be brought.

"We're so close to the end of the 30 days in which they can indict the officer that shot our nephew that was unarmed, in the middle of the day, with a weapon, less than three feet away from little children," Justin Blake said. 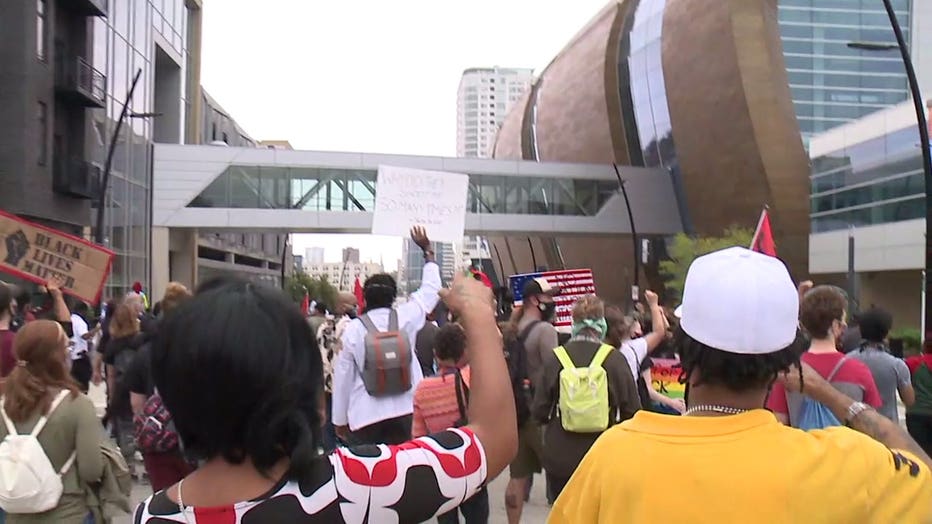 Among those who marched Saturday was Chicago-based poet and activist Blaq Ice -- a close friend of Justin Blake -- who said the family and supporters remain focused on the investigation.

"We're saying today that we're gonna continue the pressure. We're gonna stay on top of you until there's a culture change in America, there are new laws that are passed, and police accountability is put on the books," Blaq Ice said.

READ MORE: Coverage of the officer-involved shooting of Jacob Blake

The family and supporters said they won't stop until justice is served.

Rusten Sheskey -- the officer who shot Blake -- and two other officers who ere present at the shooting remain on paid administrative leave as the investigation continues.

The Wisconsin Department of Justice Division of Criminal Investigation aims to provide reports of the incident to a prosecutor by Sept. 22 for review.

"We're slowly getting back to business as usual, life as usual in Kenosha," Sheriff David Beth said.

The chair of Black Educators Caucus MKE said the conversation is an important one, but criticized the teacher for not giving parents a heads up.