MILWAUKEE -- Attorney General Jeff Sessions on Monday, December 18th delivered remarks in Milwaukee on efforts to combat violent crime in American cities and neighborhoods. Sessions said he is asking for 40 new prosecutors for violent crime -- with the Milwaukee area getting two. 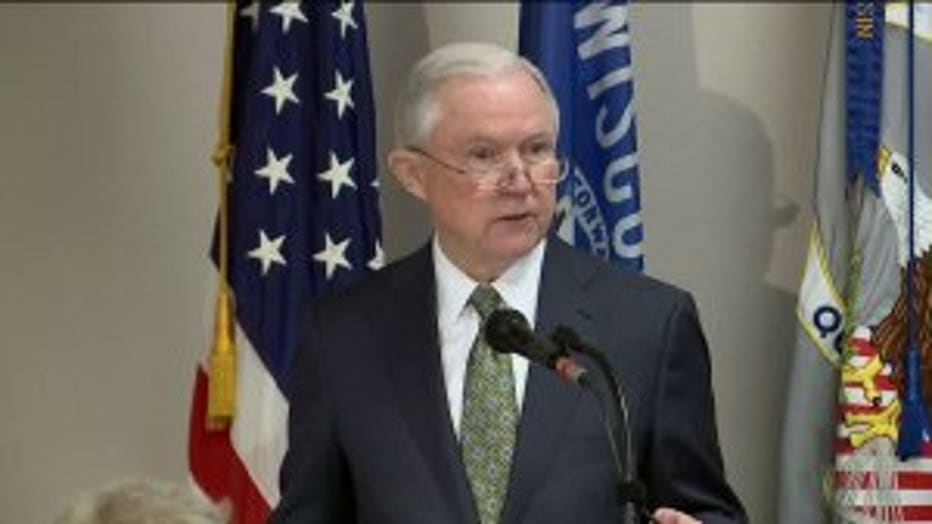 "We understand the police are not the problem. The criminals are the problem," Sessions said.

Sessions blamed drugs for the increase in violence across the country, including in Milwaukee. He said the DOJ has focused on charging and convicting gang members involved in the drug trade, as well as focusing on sex trafficking and terrorism.

"We are now adding 40 slots across the country, but this is just the beginning of our push to increase the tooth-to-tail ratio at this Department to drive down violent crime.  We plan to push out an additional 260 AUSAs in the months to come. To do that, we are asking Congress to support these efforts, and to invest in you, too. I know this is an important investment that will pay dividends for years to come and one that will make a discernible impact in communities struggling with violence. We're in a tough budget time. Crime is rising. I'm determined to move resources in the Department of Justice to the most productive areas. We have no money, not a dime to waste," said Sessions. 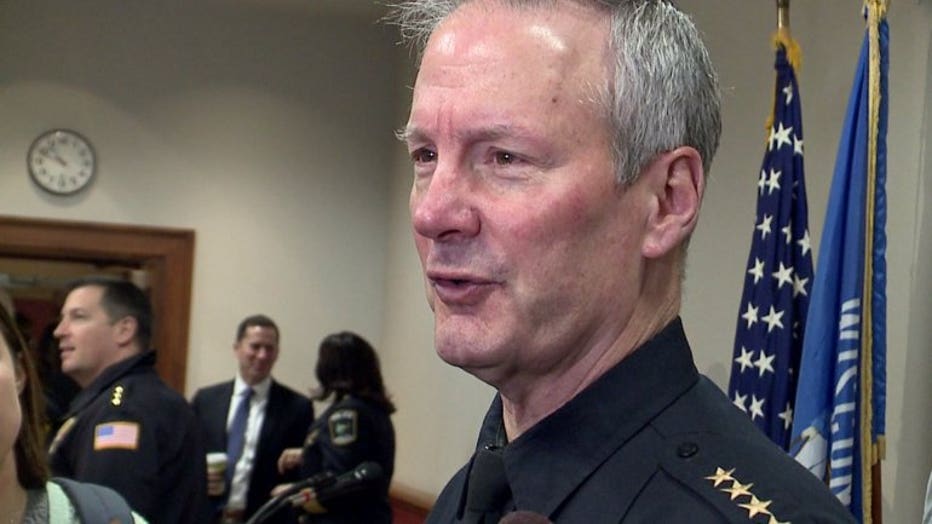 "We've long advocated for additional prosecutorial resources. We recognize we generate more arrests than can be handled by the courts as it is, but obviously, having the federal venue for our more serious federal gun offenders is promising," Milwaukee Police Chief Ed Flynn said.

Rep. David Bowen, D-Milwaukee , was one who protested outside the Milwaukee Federal Building and US Courthouse where Sessions spoke Monday.

"If he was truly committed, he would start with making sure that we have a police department that has great community relations with the people that they serve, treating people with dignity, respect -- and focusing there first," Bowen said. 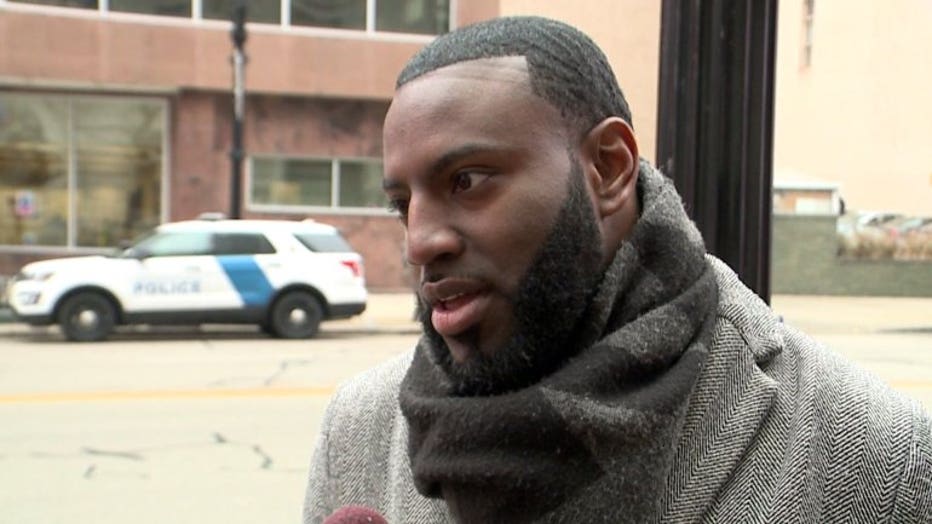 In the months to come, Sessions said he plans to push for an additional 260 prosecutors across the country.

Meanwhile, Sessions said he believes in continuing a federal, state and local law enforcement effort in which a task force combines to target street crime. He said he hopes to get funding so this can continue next year.

Sessions in August stopped in Green Bay, where he spoke during the National Alliance for Drug Endangered Children’s annual conference — telling the Wisconsin audience that the opioid epidemic was “the top lethal issue” in the U.S. and urged people to “foster a culture that’s hostile to drug use” that reminded some of the 1980s War on Drugs.

Read It: AG Jeff Sessions' remarks on the Dept. of Justice's efforts to combat violent crime:

"I’ve visited 31 U.S. Attorney’s offices since January and each time I am immediately buoyed by the dedication of career prosecutors and all that you accomplish on a daily basis.  It does my heart good to be out here with the troops on the front line.  Thank you for that—you all are incredible emissaries for the rule of law and the Department that I am honored to lead.

On behalf of the President, I want to thank all of our Assistant U.S. Attorneys, the support staff here, and our state and local law enforcement officers.  Thank you for all you do, day in and day out.

To all of our law enforcement officers: the President and I stand with you.

On Friday the President spoke at the FBI National Academy Graduation ceremony.  He’s the first President to do so in 46 years.  He said, loud and clear, “America’s police have a true friend and loyal champion in the White House…The President of the United States has your back 100 percent.”

President Trump was elected as the law and order President.  He was elected to make America safe again and to have the backs of our men and women in blue.

That mission has never been more important.

Thanks to dedicated law enforcement officials like you, crime declined in America for 20 years.  It wasn’t easy.  It took important legal reforms, the development of new and innovative policing strategies, and decades of hard and dangerous work—but it saved lives and made a difference in countless communities.

Meanwhile, more Americans are dying because of drugs than ever before.  Last year, an estimated 64,000 Americans died of drug overdose—one every nine minutes.  That’s nearly the population of Janesville.

Millions of Americans are living with the daily struggle of addiction.  And for Americans under the age of 50, drug overdoses are now the leading cause of death.

These trends are not a blip or an anomaly.  I fear that, if we do not act now and smartly, this nation could see decades of progress reversed.

Sadly, this beautiful city has not been immune to these problems.  In Milwaukee, rape is up 21 percent in just two years.  Assault is up nine percent.  And murders are up an astonishing 57 percent. We cannot accept these trends.

As we all know, these are not just numbers—these are moms, dads, daughters, spouses, friends, and neighbors.  These are empty places at Christmas dinner this year and holes in the hearts and souls of victims’ families that will never close.

The victims include Clarence Taper, a 60-year-old father, grandfather, and hardworking employee at a restaurant here in Milwaukee, who was robbed and shot to death in September while making a delivery.

Almost a year ago today, a young man in Milwaukee was beaten to death by three attackers, who forced him to eat cat litter and feces.  The assailants filmed themselves taking turns beating and urinating on him before leaving him to die in a snowbank.

And early last year, Tamecca Perry, a 23-year-old mother of two who was nine months pregnant with her third child, was shot to death in her home because of a dispute over loud music.  Her young children watched her die, just days before her unborn baby was due.

But let me tell you this: we will not allow the progress made by our women and men in blue over the past two decades to simply slip through our fingers now.  Plain and simple: we will not cede a community, a block, or a street corner to violent thugs or poison peddlers.

As soon as I was sworn in as Attorney General, President Trump sent me an executive order to reduce crime in America.

At the Department of Justice, we embrace that goal.  And you and I know from experience that it can be achieved.

Over these last 10 months, the Department has taken aggressive action to implement the President’s agenda.

This year alone, we have secured convictions against more than 1,000 gang members.  With our Central American partners we have charged 4,000 members of the vicious MS-13.  We have secured 200 human trafficking convictions, as well as four convictions for material support of terrorism.

I could go on.  There’s a lot more we could talk about.

These are major accomplishments that benefit the American people.

And these are your accomplishments.  We could not have done it without you.

Many of our successes have been achieved in this office.  Earlier this month, a man was sentenced to 16 years in prison for stealing a 73-year-old woman’s car after threatening her at gunpoint.

Last month, a man was found guilty for distributing heroin that took at least one life.  He now faces a mandatory life sentence.

And in September, five siblings were sentenced to prison for robbing several banks and businesses at gunpoint.  Thanks to you, they now face a total of 50 years of prison time.

I’m grateful for the hard work of those in this office who prosecuted these cases, especially dedicated Assistant U.S. Attorneys like Maggie Honrath, Laura Kwaterski, Daniel Humble, and Andrew Maier.  Great job.

We are right to be proud of these victories.  But we still have more work to do.

As we know, 85 percent of law enforcement is state, local, and tribal.  To be effective, we must utilize this force multiplier.  These are the authorities that have the critical street level intelligence regarding the criminal element.

We are most effective when these experienced state and local investigators are united with the resources and expertise of the 15 percent that are our federal law enforcement.  Put simply, this combined task force model is what truly works to reduce violent crime and that is precisely what we have established with our reinvigorated Project Safe Neighborhoods program.

Led by our 94 U.S. Attorney’s offices, Project Safe Neighborhoods task forces are hitting the streets across America to apprehend and bring violent criminals to justice.  I’ve asked Congress for additional funding for these task forces next year because I believe nothing will be more effective.

Under this program, I am asking a great deal of our U.S. Attorneys.  I am empowering them—but I’m holding them accountable for results.

To put them in the best position to impact and reduce violent crime, through a re-allocation of resources, we will enlist and deploy 40 additional violent crime prosecutors across the United States—including two right here in this office.

These additional Assistant United States Attorneys can make an immediate impact.  I know: as a former AUSA myself, I have seen it firsthand.

A committed AUSA can supervise multiple investigations, who in turn can apprehend and dismantle multiple criminal organizations simultaneously.  And that means fewer violent criminals on the streets, which means it’s even easier to concentrate resources on the bad actors who are left. That is how you reduce crime.

I know this is an investment that will pay dividends for years to come and one that will make a discernible impact in communities struggling with violence.

We are in tight budget times. Crime is rising.  I am determined to move resources to the most productive areas.

We have a saying around my office that a new federal prosecutor is “the coin of the realm.”  That means when we can eliminate less productive or wasteful spending, we ask whether this will allow us to deploy another AUSA to a violence-plagued district.

We are now adding 40 slots across the country, but this is just the beginning of our push to increase the tooth-to-tail ratio at this Department to drive down violent crime.  We plan to push out an additional 260 AUSAs in the months to come.

To do that, we are asking Congress to support these efforts, and to invest in you, too.

And as we’ve sadly seen in New York City just in the last two months, these are national security issues as well. So I urge Congress to take these matters seriously, to support our law enforcement in the work that we’ve asked them to do, including our immigration officers, and not to shut down the government to obstruct the President’s agenda to reduce crime and have a lawful system of immigration.  We need to keep the government open—and we need to fund these priorities.

Violent crime has been increasing here in Milwaukee, and that is deeply troubling.  But thanks to our law enforcement officers, this is not hopeless.  We can make America safe again.

I want to personally express my deep appreciation and profound thanks to all the women and men of law enforcement—state and local—and their families, for sacrificing so much and putting your lives on the line every day, so that the rest of us may enjoy the safety and security you provide.  We love you and honor your work.

Know this: we have your back and you have our thanks.