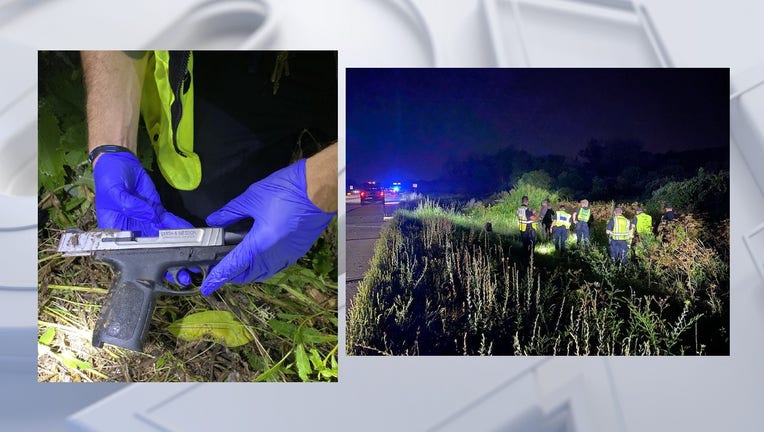 WAUKESHA, Wis. - Two people were taken into custody Sunday night, Aug. 21 following police pursuit in Waukesha. It began around 7:15 p.m. after an officer attempted to conduct a traffic stop.

According to police, the vehicle did not immediately pull over and subsequently conducted a U-Turn and accelerated. The officer pursued the vehicle for approximately three miles until the vehicle came to a stop on I-94 around mile marker 299.

During this pursuit, the vehicle was operating recklessly and disregarded many traffic signals, according to police. The vehicle drove around other vehicles in the area of E. Moreland Boulevard and Kossow Road.

When the suspect vehicle drove off road, one of the tires began to deflate and eventually started to disintegrate. The vehicle continued to flee eastbound onto I-94, however, the speeds decreased as the vehicle was driving with one of its tires on its rim.

As the vehicle continued to travel eastbound on the I-94 on-ramp a metal object was thrown from the vehicle. A short distance later, the vehicle was unable to travel any further and came to a stop.

Officers arrested two male suspects who do not reside in the City of Waukesha. The metal object that was thrown from the vehicle was a firearm. The firearm was recovered.

The operator of the vehicle will be referred to the Waukesha District Attorney’s Officer for possible charges of Felony Fleeing/Eluding, 2nd degree recklessly endangering safety, Operating While Intoxicated, Possession of THC and several other traffic violations.

The passenger of the vehicle will be referred to the Waukesha District Attorney’s Office for possible charges of Bail Jumping, Possession of narcotics/paraphernalia.

The investigation is continuing as to who threw the firearm from the vehicle.