While Israel welcomed the news, Palestinian officials declared the Mideast peace process "finished" and Turkey announced it would host a meeting of Islamic nations next week to give Muslim countries' leaders an opportunity to coordinate a response.

The harsh global reaction cast questions about the feasibility of a brewing U.S. peace plan that is expected to be presented by the White House in the near future.

The Palestinians seek east Jerusalem as the capital of a future independent state and fear that President Trump's declaration essentially imposes on them a disastrous solution for one of the core issues in the Israeli-Palestinian conflict. 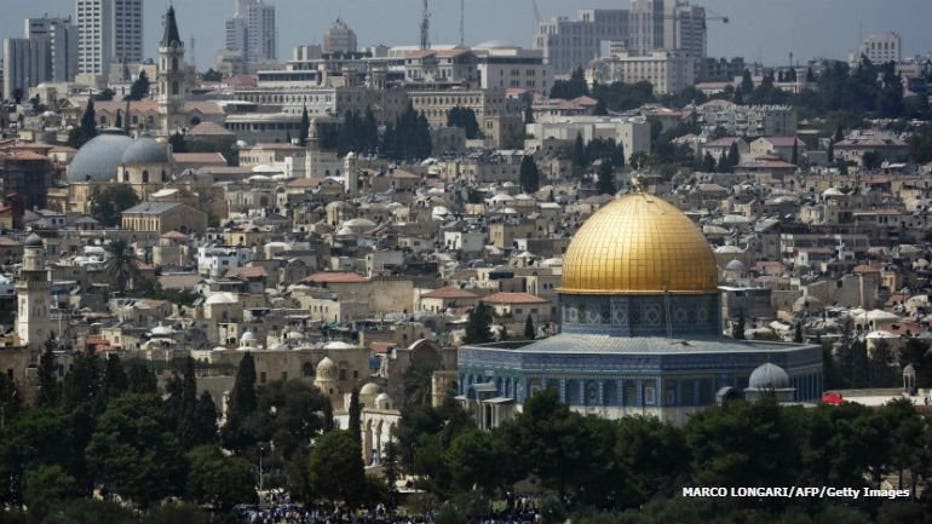 "There is no way that there can be talks with the Americans. The peace process is finished. They have already pre-empted the outcome," said Palestinian official Hanan Ashrawi. "They cannot take us for granted."

U.S. officials said late Tuesday that President Trump will instruct will recognize Jerusalem as Israel's capital, despite intense Arab, Muslim and European opposition to a move that would upend decades of U.S. policy and risk potentially violent protests. President Trump was expected to unveil his plan in a speech later Wednesday.

Israel's prime minister, Benjamin Netanyahu, said on Facebook that "Our historical national identity is receiving important expressions everyday." He said he would comment further later in the day.

Other members of his Cabinet were more forthcoming. Education Minister Naftali Bennett, head of the nationalist Jewish Home party, praised what he called President Trump's "bold and yet natural" move.

"The sooner the Arab world recognizes Jerusalem as our capital, the sooner we will reach real peace. Real peace that is not predicated on an illusion that we are going to carve up Jerusalem and carve up Israel," Bennett told The Associated Press on the sidelines of the Jerusalem Post Diplomatic Conference.

Pope Francis said he was "profoundly concerned" and appealed that "everyone respects the status quo of the city." China, which has good ties with Israel and the Palestinians, expressed concerns over "possible aggravation of regional tensions." Two leading Lebanese newspapers published front-page rebukes of President Trump.

Britain's Foreign Minister, Boris Johnson, who had already expressed concern about the U.S. decision, on Wednesday said it was now time for the Americans to present their peace plan for the region.

"Clearly this is a decision that makes it more important than ever that the long-awaited American proposals on the Middle East peace process are now brought forward," Johnson told reporters in Brussels.

In his speech, President Trump was expected to instruct the State Department to begin the multi-year process of moving the American Embassy from Tel Aviv to the holy city. It remained unclear, however, when he might take that physical step, which is required by U.S. law but has been waived on national security grounds for more than two decades.

The officials said numerous logistical and security details, as well as site determination and construction, could take three or four years to sort out.

To that end, the officials said President Trump would delay the embassy move by signing a waiver, which is required by U.S. law every six months. He will continue to sign the waiver until preparations for the embassy move are complete.

The officials, speaking on condition of anonymity pending President Trump's announcement, said the decision was merely an acknowledgment of "historical and current reality" rather than a political statement and said the city's physical and political borders will not be compromised.

They noted that almost all of Israel's government agencies and parliament are in Jerusalem, rather than Tel Aviv, where the U.S. and other countries maintain embassies.

Still, the declaration of Jerusalem as Israel's capital carries deep symbolic significance and could have dangerous consequences. The competing claims to east Jerusalem, the section of the city captured by Israel in 1967, have frequently boiled over into deadly violence over the years.

East Jerusalem is home to the city's most sensitive Jewish, Muslim and Christian holy sites, as well as its 330,000 Palestinian residents.

The United States has never endorsed the Jewish state's claim of sovereignty over any part of Jerusalem and has insisted its status be resolved through Israeli-Palestinian negotiation.

The mere consideration of President Trump changing the status quo sparked a renewed U.S. security warning on Tuesday. America's consulate in Jerusalem ordered U.S. personnel and their families to avoid visiting Jerusalem's Old City or the West Bank, and urged American citizens in general to avoid places with increased police or military presence.

President Trump, as a presidential candidate, repeatedly promised to move the U.S. Embassy. However, U.S. leaders have routinely and unceremoniously delayed such a move since President Bill Clinton signed a law in 1995 stipulating that the United States must relocate its diplomatic presence to Jerusalem unless the commander in chief issues a waiver on national security grounds.

Key national security advisers — including Secretary of State Rex Tillerson and Defense Secretary Jim Mattis — have urged caution, according to the officials, who said President Trump has been receptive to some of their concerns.

President Trump has spoken of his desire to broker a "deal of the century" that would end Israeli-Palestinian conflict.

U.S. officials, along with an outside adviser to the administration, said the president's speech was not aimed at resolving the conflict over Jerusalem.

He isn't planning to use the phrase "undivided capital," according to the officials. Such terminology is favored by Israeli officials and would imply Israel's sovereignty over east Jerusalem.

One official also said President Trump would insist that issues of sovereignty and borders must be negotiated by Israel and the Palestinians. The official said President Trump would call for Jordan to maintain its role as the legal guardian of Jerusalem's Muslim holy places, and reflect Israel and Palestinian wishes for a two-state peace solution.

He says that moving the embassy to Jerusalem would be a "grave mistake" and would "not bring any stability, peace but rather chaos and instability."