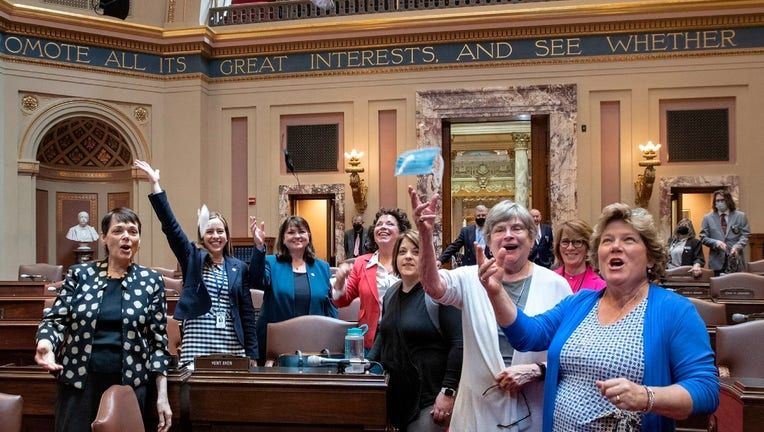 Senators throw masks in the air upon learning about the new CDC guidance on mask-wearing for those who are fully vaccinated. (Senate Media Services)

The council, comprised of Walz and the four other statewide officials, voted 5-0. Members raised concerns about the timing but said the Centers for Disease Control and Prevention left them with little choice. Thursday, the CDC said fully vaccinated people could go without masks in most indoor settings.

Minnesota Gov. Walz announced he will end the statewide mask mandate on Friday morning after the Centers for Disease Control and Prevention announced that fully vaccinated people can go without masks indoors.

"The horse is out of the barn, and we’ve got to do what we’ve got to do," said state Auditor Julie Blaha, a Democrat who is on the Executive Council.

The CDC announcement undercut Walz's initial plan to remove the statewide mandate once 70% of Minnesota adults were vaccinated, or by July 1, whichever came first. Friday, state health officials reported that just 61% of Minnesotans age 16 and older have at least one dose of the vaccine and 51% are fully vaccinated.

The Executive Council also approved a 30-day extension of Walz's scaled-back emergency powers, which the governor said was necessary to continue a ban on evictions and speed vaccinations. Capacity limits on businesses and physical distancing rules will remain in place through May 28.

Masks will still be required in schools through the end of the school year. After that it will be up to local school districts.

Removing the statewide order leaves a patchwork of regulations in place. Both Minneapolis and St. Paul have already announced they will keep their mask requirements in effect, and several businesses plan to maintain their own rules.

"How can we do a little bit better in Black and brown communities to get those vaccinations out?" Ellison asked during the Executive Council meeting.

"We're not stopping until we get at those gaps you mention," Malcolm told Ellison.

The CDC sparked a day of change in Minnesota. Shortly after the announcement, several Democratic state senators reenacted Mary Tyler Moore by throwing their masks into the air in celebration. But Republicans said rescinding the mask mandate did not go far enough and criticized the governor for maintaining the requirement in schools.

"He was forced in my opinion to make a move that he wasn’t ready to make," Senate Majority Leader Paul Gazelka, R-East Gull Lake, told reporters at the Capitol. "There’s no reason that teachers and everybody has to wear masks in school. It makes no sense to me. we have this opportunity to just lift it all off."

The governor's move appears to have made no progress toward a state budget deal. Top Republicans and Democrats acknowledged Friday that they will need a special session because they won't finish by Monday's adjournment.

If lawmakers don't pass a budget by June 30, state government shuts down.