Our investigation finds the state is sometimes waiving a common workplace safety restriction because of chronic staffing shortages that could put inmates, employees and the public in jeopardy.

RACINE, Wis. - They have no game plan. That's what a Racine Correctional Officer tells the FOX6 Investigators about the Wisconsin Department of Corrections response to COVID-19.

Our investigation finds the state is sometimes waiving a common workplace safety restriction because of chronic staffing shortages that could put inmates, employees and the public in jeopardy.

From the outside, Racine Correctional Institution (RCI) appears to be a place of rigid order. But that's not how one veteran correctional officer describes what is taking place inside.

“It’s a complete mishmash of unorganized chaos," said Michael (not his real name), who asked that we not show his face or use his name because he still works at the facility.

Michael says he is routinely assigned to supervise COVID-19 positive inmates for 16 straight hours, including what are known among staff as "hospital vigils" in which security workers accompany sick inmates sent for COVID-19 treatment.

“It really messes with your head all day long," he said. 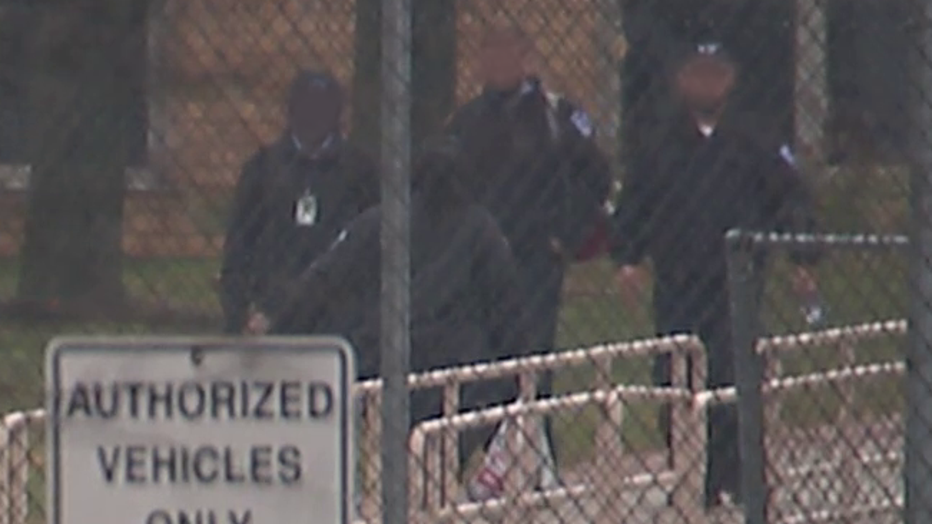 As of Wednesday morning, Nov. 25, the Wisconsin Department of Corrections (DOC) COVID-19 Dashboard reported 398 active infections among the inmate population in Racine. With a total population just short of 1,600 inmates, that means one out of every four individuals in custody in RCI has a current case of COVID-19. More than twice that many Racine inmates (860) have had it at one time or another since the pandemic began.

“They are so overwhelmed with positive cases that they don’t know what to do right now," said Michelle Sneed, whose son is an inmate there.

"My son did something stupid, yeah he did," she said. 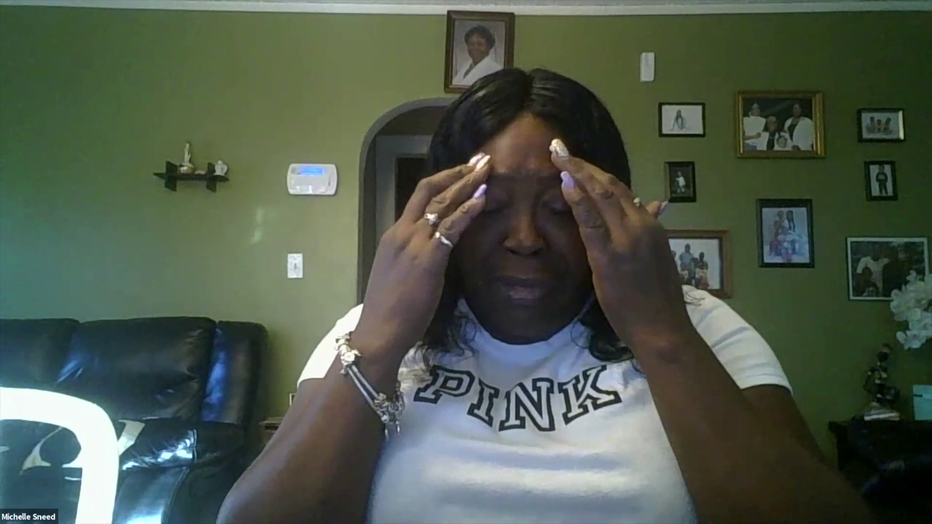 Michelle Sneed fights back tears as she talks about her son, Jonathan Lanier, a Racine inmate who recently tested positive for Covid-19.

For weeks, Jonathan Lanier has written to his mother, urging her to tell anyone who will listen -- FOX6 News, Gov. Tony Evers -- just how bad it's getting.

"Don't wait til I'm dead," he wrote in an email sent on Oct. 31. Three weeks later, Lanier wrote his mother again to inform her that he, too, has now tested positive.

“I lost a son 36 years ago to a tragic event," Sneed said through a wavering voice. "I don’t want to lose another son because of COVID-19!”

Statewide, at least 11 inmates have already died from COVID-19. Racine is one of 26 prisons in the state with active infections as of Wednesday morning. It's one of eight prisons with more than one hundred active cases.

“It’s very much like being on a cruise ship," said Faithe Wills, who called FOX6 News from Canada, where she gets updates from her fiance, Prince Rashada. He's an inmate in Fox Lake Correctional, where the number of active cases peaked on Monday, Nov. 23, at 390 inmates and 42 employees.

“It’s just like a petri dish of illness," Wills said.

"There is absolutely no social distance in there," said JenAnn Bauer, a former inmate in Taycheedah, which this week reached a case count of 140 in a facility that is, like most others in the state, packed far beyond its designed capacity.

Bauer is now an advocate for women in prison and she's concerned about how infrequently they are getting out of their cells.

“The little bit of freedom that these people do have on a daily basis is now taken away," she said.

Michelle Sneed is worried about how the virus is getting in.

“The inmates aren’t bringing the COVID to themselves," she said.

“It’s the staff that are bringing it in," Wills said. 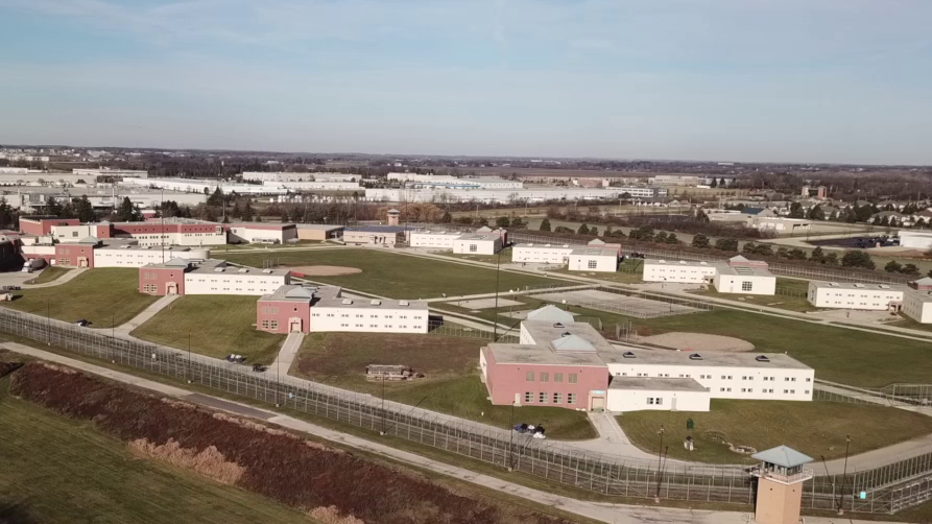 Racine Correctional Institution hit 398 active cases of Covid-19 among inmates on Tuesday, November 24th. The prison has nearly 1600 total inmates, meaning 1-in-4 are currently infected with the virus.

“If somebody a mile away in Kenosha sneezes, their COVID’s not gonna blow into the prison," said Michael, the Racine Correctional Officer. "So it’s gotta be coming in from staff.”

“Do you know how it’s getting in and how to keep it out?” asked FOX6 Investigator Bryan Polcyn.

"I can’t specifically identify one source," she said.

A FOX6 investigation finds one department policy could be contributing to the risk.

And it starts at the front door.

Like many workplaces where employees must still report in person, every DOC employee who arrives at work gets a passive screening, asking if they are experiencing any symptoms. They also get a temperature check. If they have symptoms, they go home. If not, they continue on to work -- even if they report a close contact with a COVID-19 positive person.

“They’re bringing this in to other moms’ children,” Sneed said.

“It’s like, if you're exposed to it, don’t come to work," said Lanier, who called FOX6 from Racine Correctional.

“We can’t get the coronavirus unless it’s brought in from somebody who has contact with the outside world," he said. 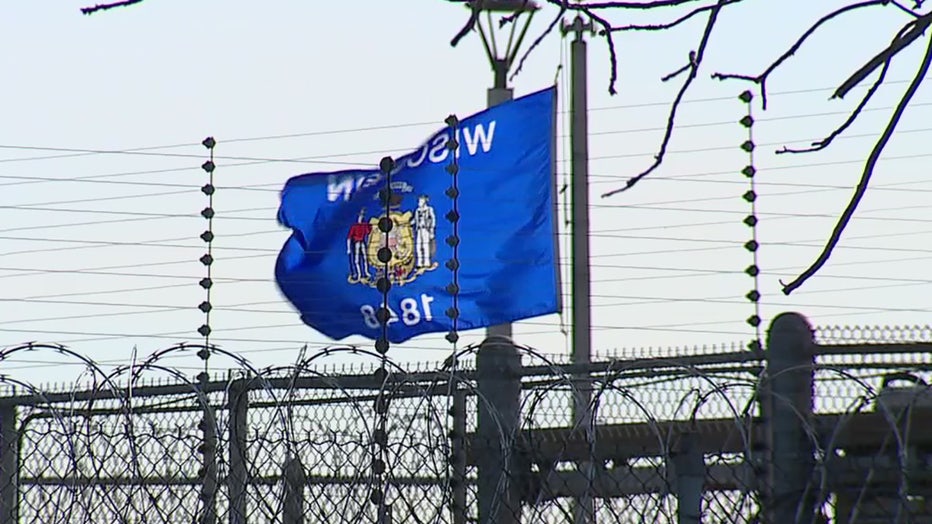 The U.S. Centers for Disease Control says workers who've been exposed to a known case of COVID-19 should quarantine for 14 days. However, there is an exception for workers whose absence could jeopardize public safety.

“I don’t know how we’d ever staff the facility," said Chad Birkholz, a Kettle Moraine Correctional Officer and representative of AFSCME Council 32, which represents some of Wisconsin's correctional officers. He says the department's chronic staffing shortages have put existing workers in a difficult spot during the pandemic.

“If we hadn’t been so short to begin with, COVID would have been a whole lot more manageable for us," he said.

In April of 2019 -- long before the pandemic -- DOC had 739 vacant security jobs (both correctional officers and sergeants). This month, there are still nearly 700 unfilled positions statewide, plus another 274 workers out with COVID-19.

Between unfilled positions and sick staff members, Racine is currently understaffed by 20%. Fox Lake, 22%. Taycheedah, 26%. And Waupun a whopping 33%. And that doesn't count the staff members pulled out of the prison to supervise inmates sent to the hospital.

“In a COVID wing with a COVID-positive inmate," Michael added. 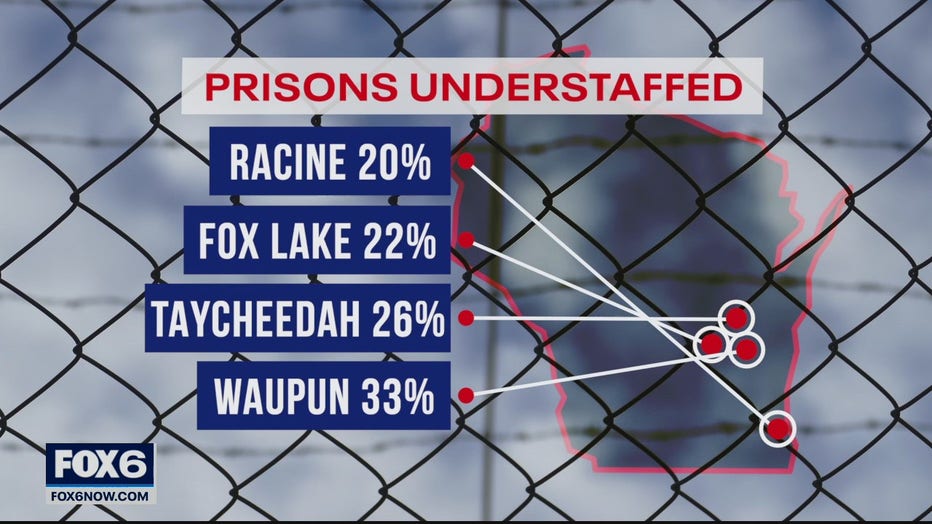 Michael tells FOX6 that health care workers in the hospital wings they're assigned to have extensive PPE, including fit-tested N-95 masks. Correctional officers often don't, despite his requests for such equipment to supervisors and department administrators.

“All you have is your basic Walgreens mask that you get at Walgreens for a buck," he said.

Last month, Fessahaye assured FOX6 they are doing all they can to limit the spread of the virus within the facilities.

“I think we have done the best we can given the circumstances," she said.

“Are you still able to isolate and quarantine sick inmates from those who are not sick?" asked Polcyn.

“It would be good if it was true," Michael said. "But she doesn’t work in a facility. She works in an office in Madison.” 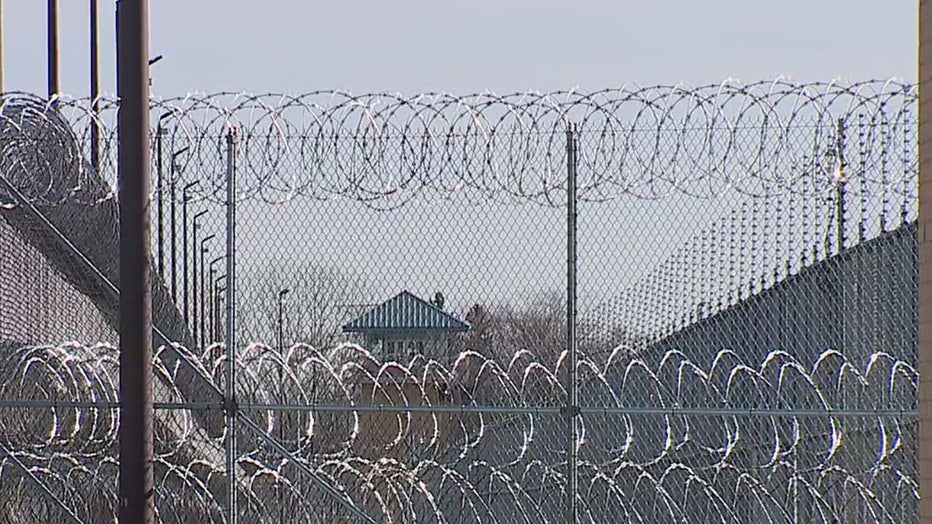 According to both Michael and Chad Birkholz, no one tells the guards which inmates have tested positive and which ones have not.

"I don't know how much of that involves HIPAA," Birkholz said.

“So how do you keep them apart?” Polcyn asked.

“Good question. You really don’t," Michael said. "They have no game plan."

"I fear for their safety," Sneed said.

It's a concern whether you have loved ones on the inside or on the outside.

“We’re bringing it home to these people," Michael said. "And we don’t even know it.”

In other words, the danger cuts both ways. 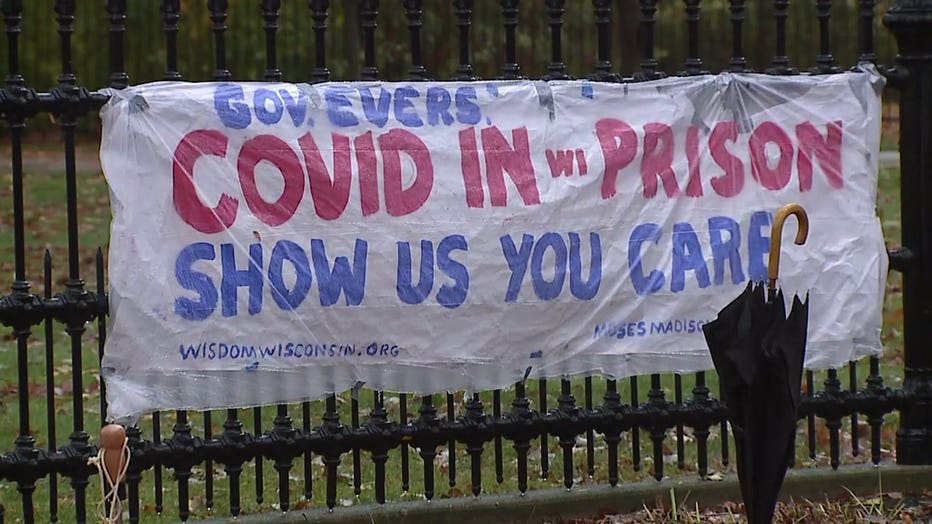 In recent weeks, protesters have demonstrated outside the governor's mansion in Madison, calling for action to reduce prison crowding and all for better social distancing. The FOX6 Investigators asked Governor Evers for an interview for this story but did not receive any response.

FOX6 also reached out to State Representative Michael Schraa, a Republican from Oshkosh who is chairman of the State Assembly's Committee on Corrections. Representative Schraa did not return FOX6's call either.

On Wednesday afternoon, DOC sent FOX6 News responses to eight questions investigators posed for this story. Here are those questions and the department's responses: