HPAKANT, Myanmar — At least 162 people were killed Thursday in a landslide at a jade mine in northern Myanmar, the worst in a series of deadly accidents at such sites in recent years that critics blame on the government's failure to take action against unsafe conditions.

The Myanmar Fire Service Department, which coordinates rescues and other emergency services, announced about 12 hours after the morning disaster that 162 bodies were recovered from the landslide in Hpakant, the center of the world’s biggest and most lucrative jade mining industry.

The most detailed estimate of Myanmar’s jade industry said it generated about $31 billion in 2014. Hpakant is a rough and remote area in Kachin state, 950 kilometers (600 miles) north of Myanmar’s biggest city, Yangon.

“The jade miners were smothered by a wave of mud," the Fire Service said. It said 54 injured people were taken to hospitals. The tolls announced by other state agencies and media lagged behind the fire agency, which was most closely involved. An unknown number of people are feared missing.

Those taking part in the recovery operations, which were suspended after dark, included the army and other government units and local volunteers.

The London-based environmental watchdog Global Witness said the accident “is a damning indictment of the government”s failure to curb reckless and irresponsible mining practices in Kachin state's jade mines."

“The government should immediately suspend large-scale, illegal and dangerous mining in Hpakant and ensure companies that engage in these practices are no longer able to operate,” it said in a statement.

At the site of the tragedy, a crowd gathered in the rain around corpses shrouded in blue and red plastic sheets placed in a row on the ground.

Emergency workers had to slog through heavy mud to retrieve bodies by wrapping them in the plastic sheets, which were then hung on crossed wooden poles shouldered by the recovery teams.

Social activists have complained that the profitability of jade mining has led businesses and the government to neglect enforcement of already very weak regulations in the jade mining industry.

“The multi-billion dollar sector is dominated by powerful military-linked companies, armed groups and cronies that have been allowed to operate without effective social and environmental controls for years,” Global Witness said. Although the military is no longer directly in power in Myanmar, it is still a major force in government and exercises authority in remote regions. 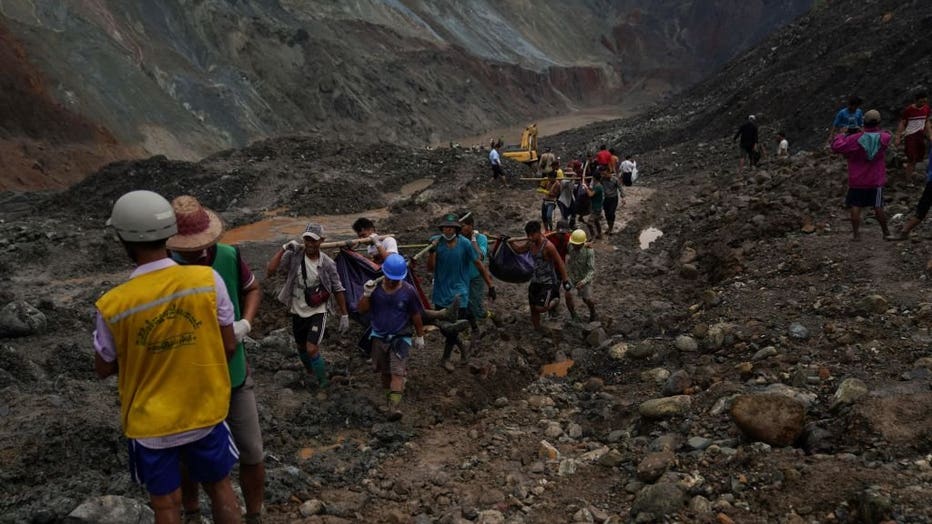 Rescuers recover bodies near the landslide area in the jade mining site in Hpakhant in Kachin state on July 2, 2020. - The battered bodies of more than 120 jade miners were pulled from a sea of mud after a landslide in northern Myanmar on July 2 afte

Thursday's death toll surpasses that of a November 2015 accident that left 113 dead and was previously considered the country's worst. In that case, the victims died when a 60-meter (200-foot) -high mountain of earth and waste discarded by several mines tumbled in the middle of the night, covering more than 70 huts where miners slept.

Those killed in such accidents are usually freelance miners who settle near giant mounds of discarded earth that has been excavated by heavy machinery. The freelancers who scavenge for bits of jade usually work and live in abandoned mining pits at the base of the mounds of earth, which become particularly unstable during the rainy season.

Most scavengers are unregistered migrants from other areas, making it hard to determine exactly how many people are actually missing after such accidents and in many cases leaving the relatives of the dead in their home villages unaware of their fate.

Global Witness, which investigates misuse of revenues from natural resources, documented the $31 billion estimate for Myanmar's jade industry in a 2015 report that said most of the wealth went to individuals and companies tied to the country's former military rulers. More recent reliable figures are not readily available.

It said at the time the report was released that the legacy to local people of such business arrangements “is a dystopian wasteland in which scores of people at a time are buried alive in landslides.”

In its statement Thursday, Global Witness blamed the civilian government of Aung San Suu Kyi's National League for Democracy party, which came to power in 2016, for failing “to implement desperately needed reforms, allowing deadly mining practices to continue and gambling the lives of vulnerable workers in the country's jade mines.”

Jade mining also plays a role in the decades-old struggle of ethnic minority groups in Myanmar's borderlands to take more control of their own destiny.

The area where members of the Kachin minority are dominant is poverty stricken despite hosting lucrative deposits of rubies as well as jade.

The Kachin believe they are not getting a fair share of the profits from deals that the central government makes with mining companies.

Kachin guerrillas have engaged in intermittent but occasionally heavy combat with government troops.